THE PRESIDENT’S HOME AT FLORIDA STATE UNIVERSITY is a direct legacy of former President Dr. T.K. Wetherell, and his wife, Virginia. This visionary couple wanted to create a campus icon that was befitting of the institution’s long and esteemed history and selected Historical Concepts to help them achieve this vision. The three level home replaces the university’s first President’s Home, which now serves as a Welcome Center for the Alumni Association. The McIntosh House, built in 1895, was moved to the campus in 1948 as the home for then-president Doak Campbell and his family. Seven additional families subsequently lived there.

In 1964, President Campbell wrote that a president’s house is “much more than merely a place for the president and his family to live,” noting that it should be a gracious setting for the university to extend its hospitality and celebrate its accomplishments. While the new President’s Home appears to be a venerable home of a bygone era, it honors Campbell’s call. This campus facility is a prominent venue for hosting a range of public events and official university functions. Since its completion in August of 2007, the Florida State University President’s Home has welcomed more than 15,000 visitors, including students, faculty, staff, alumni, legislators and government officials, national and international dignitaries and scholars, corporate representatives, key constituents, and friends. 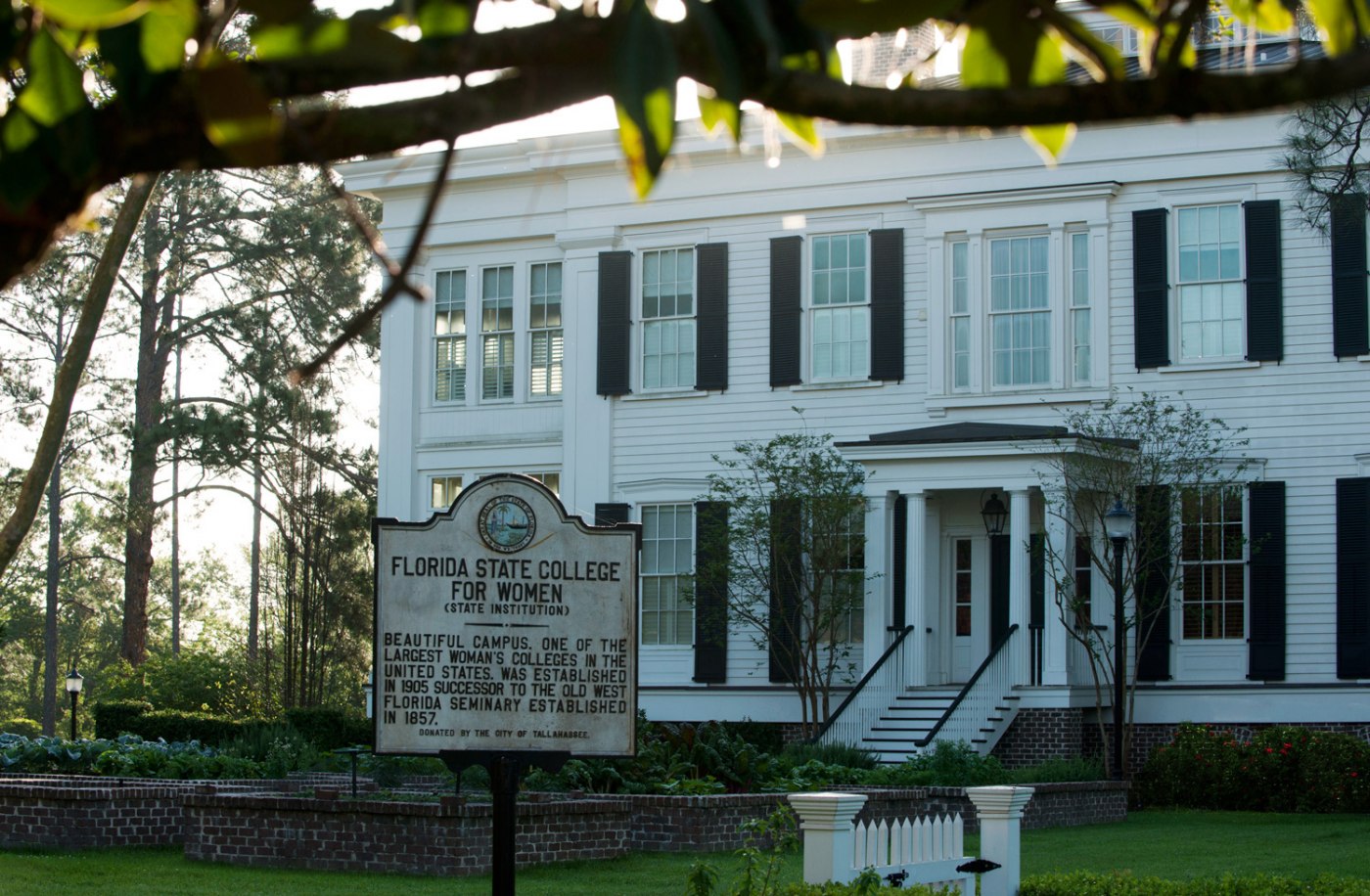 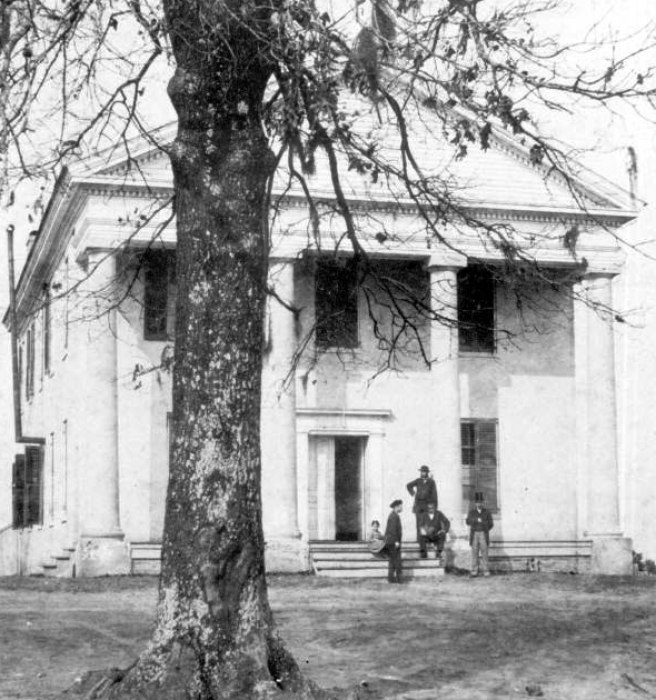 WHILE THE GREEK REVIVAL STYLE is prevalent in academic architecture, it also holds historic significance for Florida State University. A Greek Revival structure,
built in 1854, stood at the West Florida Seminary, the university’s predecessor. 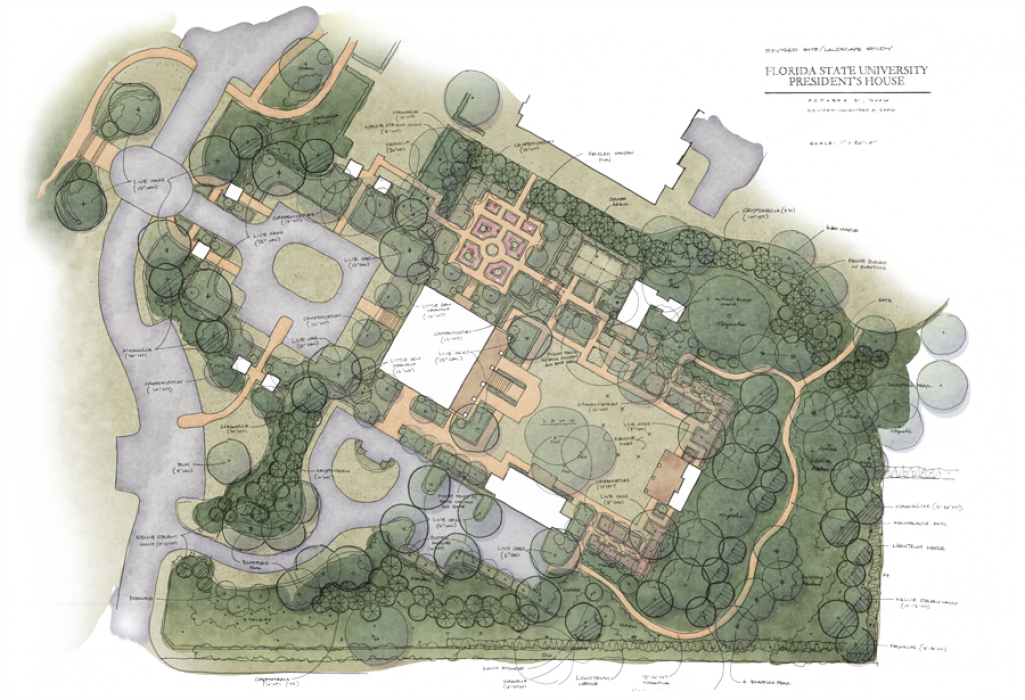 MASTER SITE PLAN
THOUGHTFUL SITE DESIGN supports the home’s unique position as both a private residence and campus facility. A dedicated drive allows the president and family private access to the upper levels of the home, while a secondary approach leads guests to the lower level where university events are held. A formal garden visually establishes a connection to the adjacent Alumni Center, while a spacious rear lawn allows for large gatherings and events. 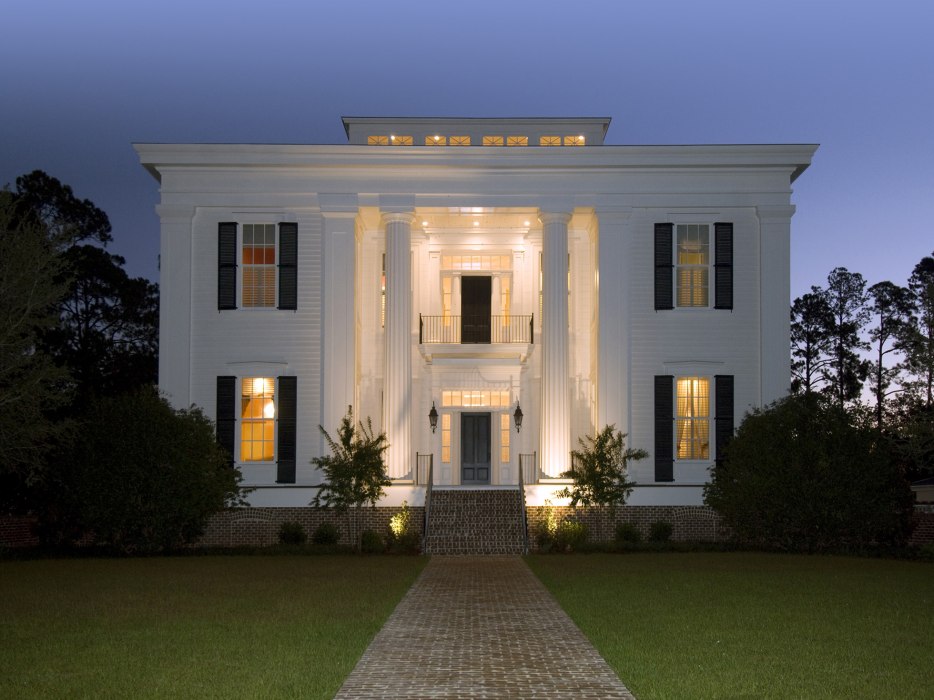 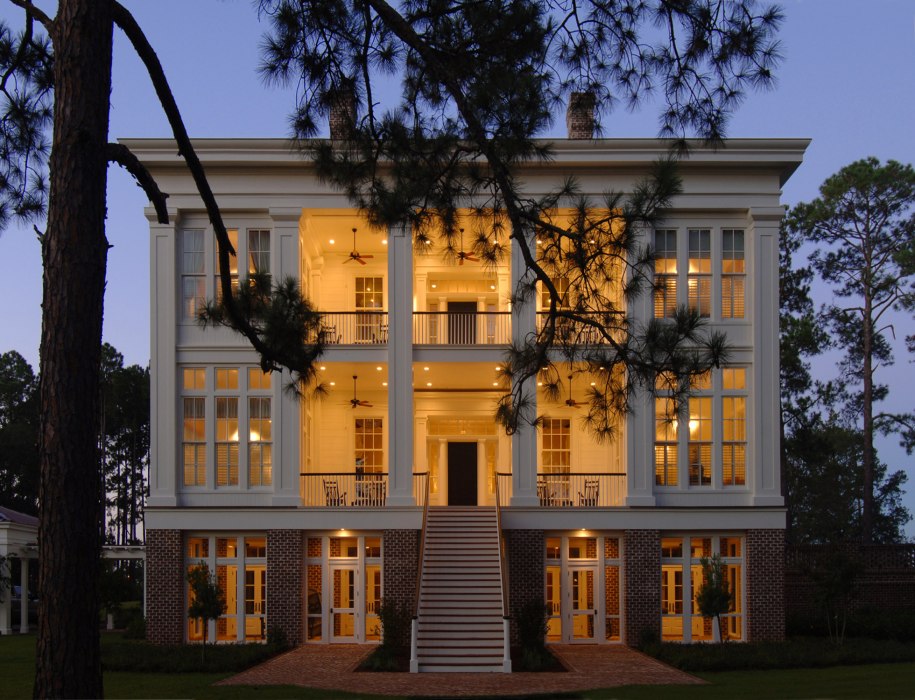 TO MAKE THE PRESIDENT’S HOME APPEAR TO BE A CAMPUS LANDMARK OF HISTORIC SIGNIFICANCE, the design team looked to Greek Revival architecture for inspiration, emulating the scale, proportions, and materials of the old plantation homes that are found throughout the region. Fluted Greek Doric columns showcase the formal front entry, while “infilled porches” on the more casual rear façade suggest that the home has undergone generational adaptations.

To accommodate public and institutional uses within the framework of a private residence, Historical Concepts provided for three distinct levels, graduating in use from private to public spaces. While the Upper Level is the personal quarters for the president and family, the Main and Lower Levels play more public roles.

THE MAIN LEVEL serves the daily needs of the first family, while also offering formal areas for personal entertaining and small university functions. To ensure appropriately-scaled areas whether hosting two guests or twenty, the floorplan is divided into rooms of various sizes with ease of circulation between them. Recessed panels in cased openings between rooms can be closed to direct circulation and separate spaces. 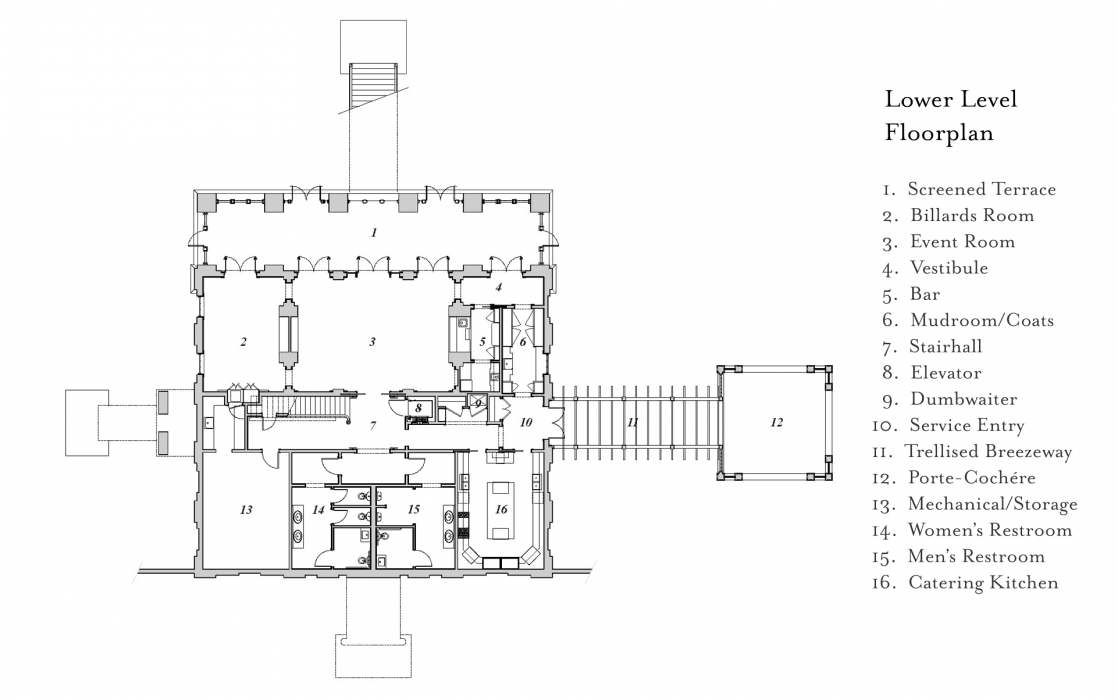 THE LOWER LEVEL takes full advantage of the slope of the site. With its more rustic and casual finish, this space is used for a wide range of activities and includes a catering kitchen, a bar, a gathering room with a high-tech audio/visual system, a billiards room, and a screened terrace. French Doors lining the rear wall open to allow for large scale indoor/outdoor events utilizing the terrace and lawn beyond, where hundreds of people can celebrate athletic victories or academic achievements. A separate vehicular drive and pedestrian approach to the Lower Level permits guests to come and go without restricting the First Family’s access to the private quarters. 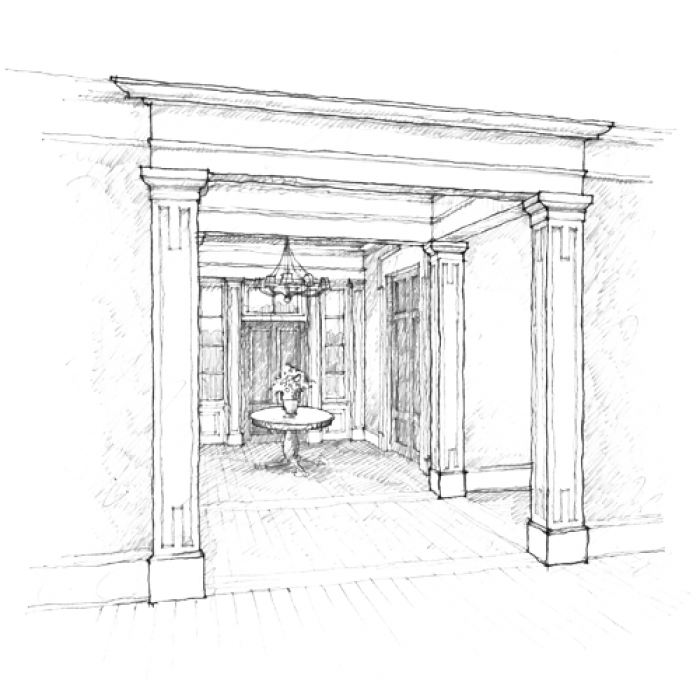 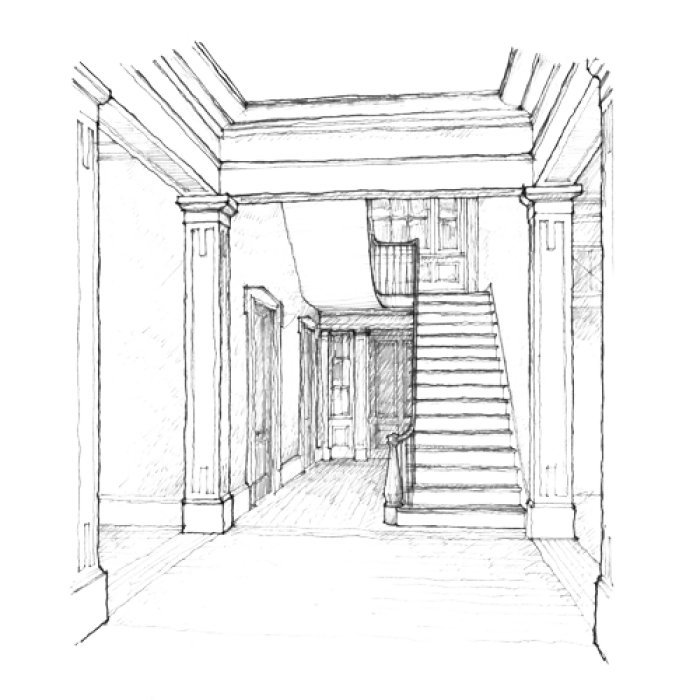 THE INTERIOR OF THE HOME is formally detailed in the Greek Revival style. It was furnished with antiques donated by alumni and artwork on loan from the university’s museum and the John and Mable Ringling Museum of Art. The President’s Home now stands as an emblem that captures the heritage of this educational institution.