This is the seventh and final installment in a multi-part series about the tour of Natchez, Mississippi sponsored by the Southeast Chapter of the Institute of Classical Architecture & Art (ICAA-SE).  Thank you for following along as we shared our observations and impressions! 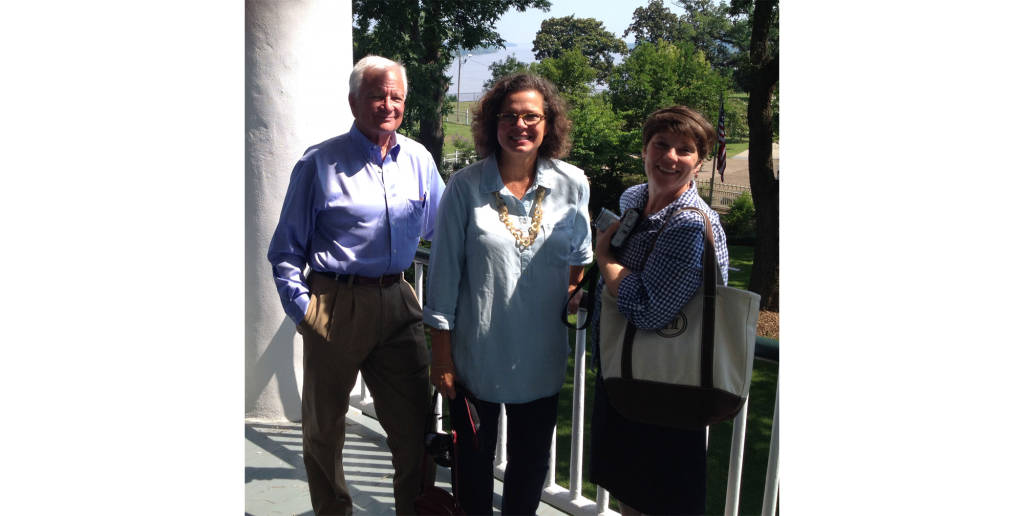 Happy travelers on the upper gallery at Rosalie

In Natchez, Jim, Suzanne and Liza were delighted to find gracious and distinctive homes, city streets lined with well-preserved buildings, and a variety of architectural styles.  All were evidence of the city’s French, British, and Spanish heritage, not to mention the fabulous fortunes made in cotton prior to the Civil War, which were preserved in large part due to the Union occupation beginning shortly after the surrender of Vicksburg and continuing until the withdrawal of U.S. troops from Natchez during Reconstruction.  The destruction of the cotton economy post-war, the demise of the steamboat, and thus the river trade, were certainly factors in the safekeeping of this historical aspect of Natchez, as well. 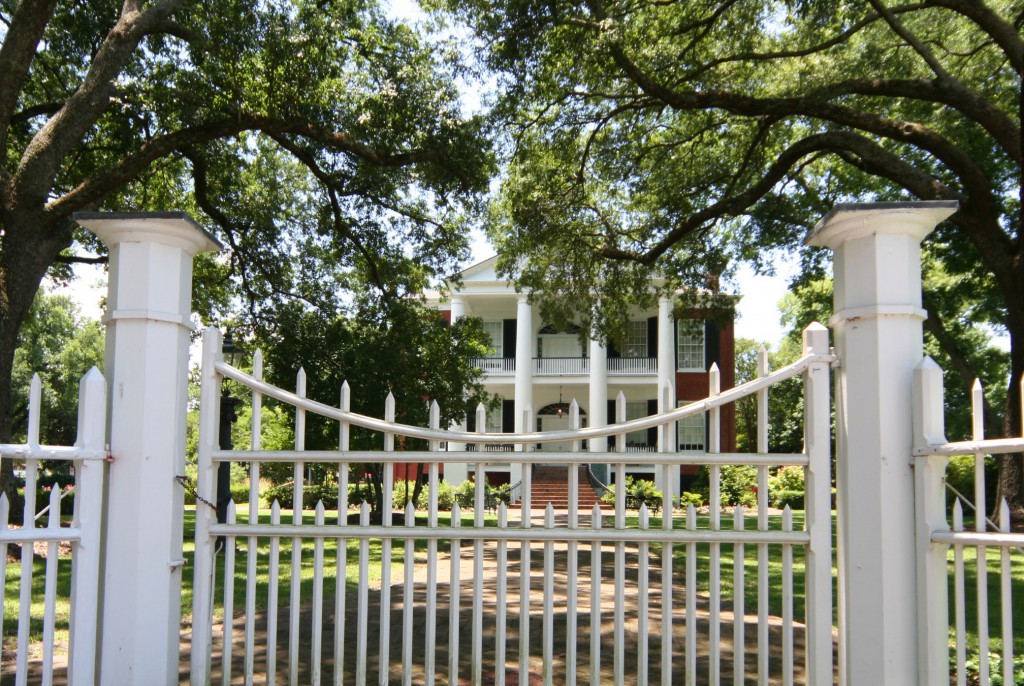 Gate and picket fence at the entrance to Rosalie

One of the elements that distinguished the Top-of-the-Hill sites from the other districts is fencing.  At Rosalie, there are palisaded wooden fences and even some remaining original cypress picket fence, built without nails. Natchez is also full of excellent examples of iron work. Stanton Hall, ca. 1857, one of the few in-town mansions to occupy an entire city block, still has fine examples of mid-nineteenth century cast-iron fencing, and a wide variety of delicate cast-iron railings grace the home’s façade.

Examples of fencing, a gate, and iron railings (placed between rather than attached to the columns of the first floor porch) at Stanton Hall

Massachusetts architect Levi Weeks designed and built Auburn, ca. 1812, another Top-of-the Hill site.   This Federal style Antebellum mansion was the oldest visited on the tour and is known to be the first home built in Natchez according to an architectural design.  Weeks is believed to have said Auburn was the first house in the Mississippi territory to utilize the orders of architecture.  The exterior features four Ionic columns, a Corinthian entablature, and double galleries.  The symmetrical wings were added in the 1830s.  By far the most impressive element of the Auburn interior was the freestanding and unsupported spiral staircase.

The front façade of Auburn

According to the Auburn Museum, the detached wooden stair is a feat “unmatched even in modern architecture.” Its delicate shape and simple tapering balusters are splendid. The fact that the staircase remains intact 200 years later is truly remarkable, given the house was both vacant and left open to the public without supervision from 1910 to 1972. 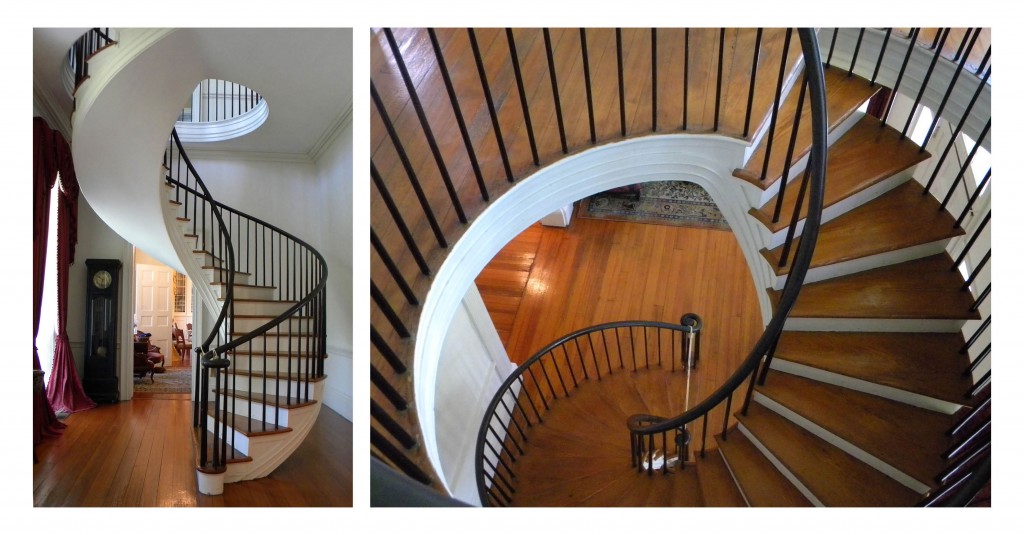 The staircase at Auburn

Also in the Natchez On-Top-Of-the Hill Historic District was Green Leaves, or the Koontz House, ca. 1836-38, a one-story residence built during the initial popularity of the Greek Revival style.  The Green Leaves plan is almost square, arranged around a central passage on a tall brick foundation, and is five-bays wide.  A Doric frieze breaks out of the center bay forming a small entry portico supported by fluted columns.  In this instance, wings flank and extend beyond the rear façade, creating a courtyard (see post no. 1 for a photo of this area).

The entablature of the Green Leaves front portico has a handsome frieze with metopes and triglyphs. Above each triglyph is a mutule; a rectangular block under the soffit meant to resemble a piece of wood with six rows of wooden pegs driven into the rafters. The raised panel on the underside of the beam further illustrates the fine detailing of this house.  The home has been in the same family since 1849 and contains an eclectic collection of 19th century decorations, documents, furnishings, and memorabilia.

The front façade and a detail of Green Leaves entablature

In the Upriver District, the ICAA-SE was permitted to wander about The Burn, ca. 1834, a delightful story-and-a-half home said to be the oldest documented Greek Revival residence in Natchez.  The Burn is beautifully detailed and proportioned.  Similar to other pre-Civil War Natchez houses, the front façade of The Burn has five-bays with the central three supporting a portico.  The pilasters of the end bays have an applied rectilinear Grecian design.  They rest on a wide molded base and support a richly detailed Greek Doric order entablature.  The portico has fluted columns and is decorated with molded panels set into the soffit of the entablature, the detail of which is remarkably similar to to that of the portico at Green Leaves. 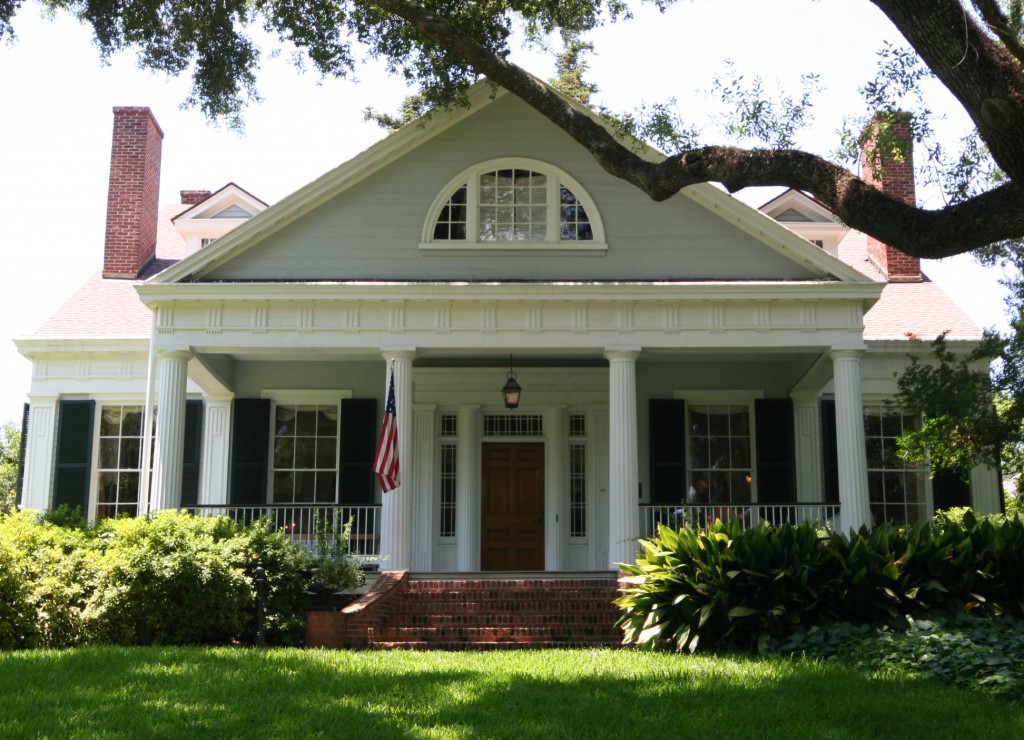 The front façade of The Burn 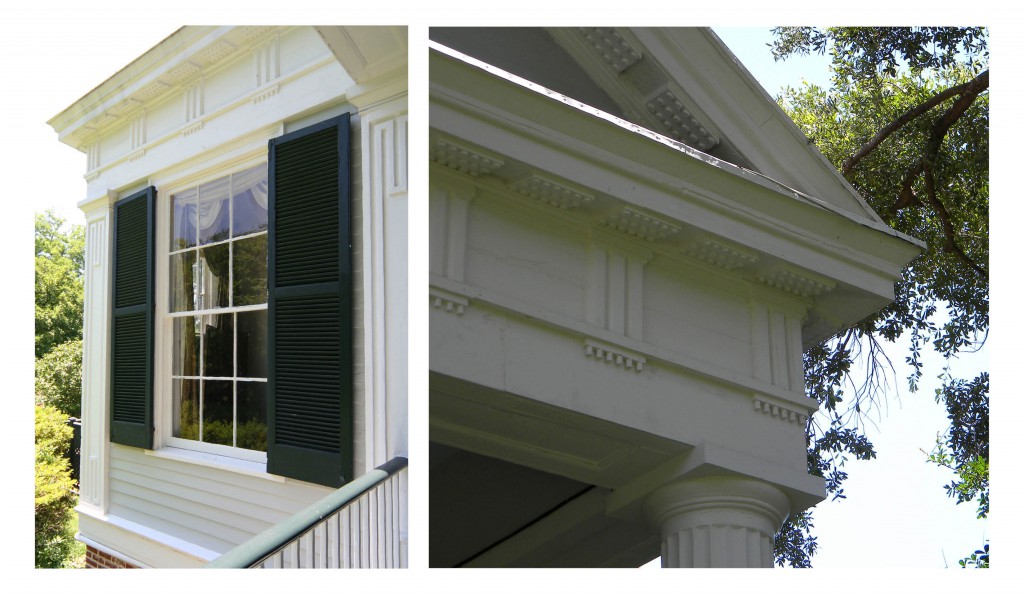 Details at The Burn

While in Natchez the tour group stayed in the Downriver District.  As guests of Dunleith Historic Inn, ca. 1856, Historical Concepts and company were free to explore the majority of main house.  With 26 two-story columns and fully surrounding colonnade, it is one of the most fully realized Greek Revival temple forms in Natchez.  The Tuscan columns, built of brick and finished with stucco, support an architrave with paneled soffit, a plain frieze, and a heavily bracketed projecting cornice.  Floor-length double-hung windows are 6-over-9 and have 3-part green wooden shutters on both the first and second floor; designed to allow access to the porch on both levels.  While of similar proportions, the ornamental iron balustrades which enclose the galleries are of different patterns. 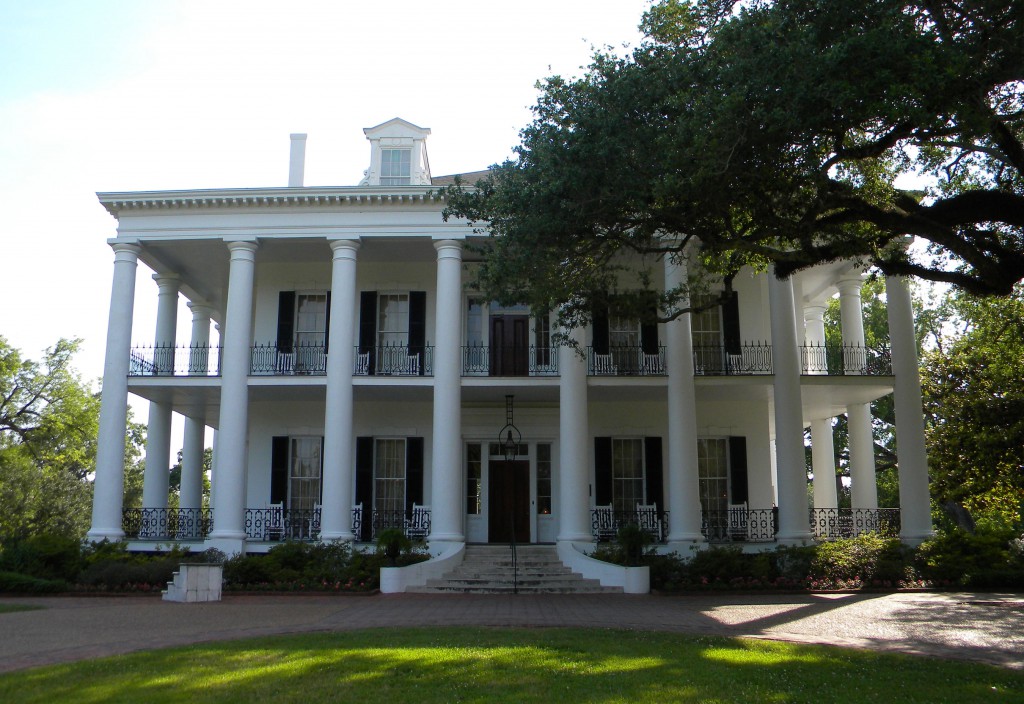 Lodging at Dunleith meant tour participants were able to walk across the street to Twin Oaks, ca. early 1810’s, the other Antebellum home visited.  Twin Oaks is considered a vernacular interpretation of the Greek Revival style.  It is a charming one-and-one half story masonry cottage, with the front stuccoed and scored to resemble cut stone and a portico with a single semi-circular window encompassing the central three-bays. 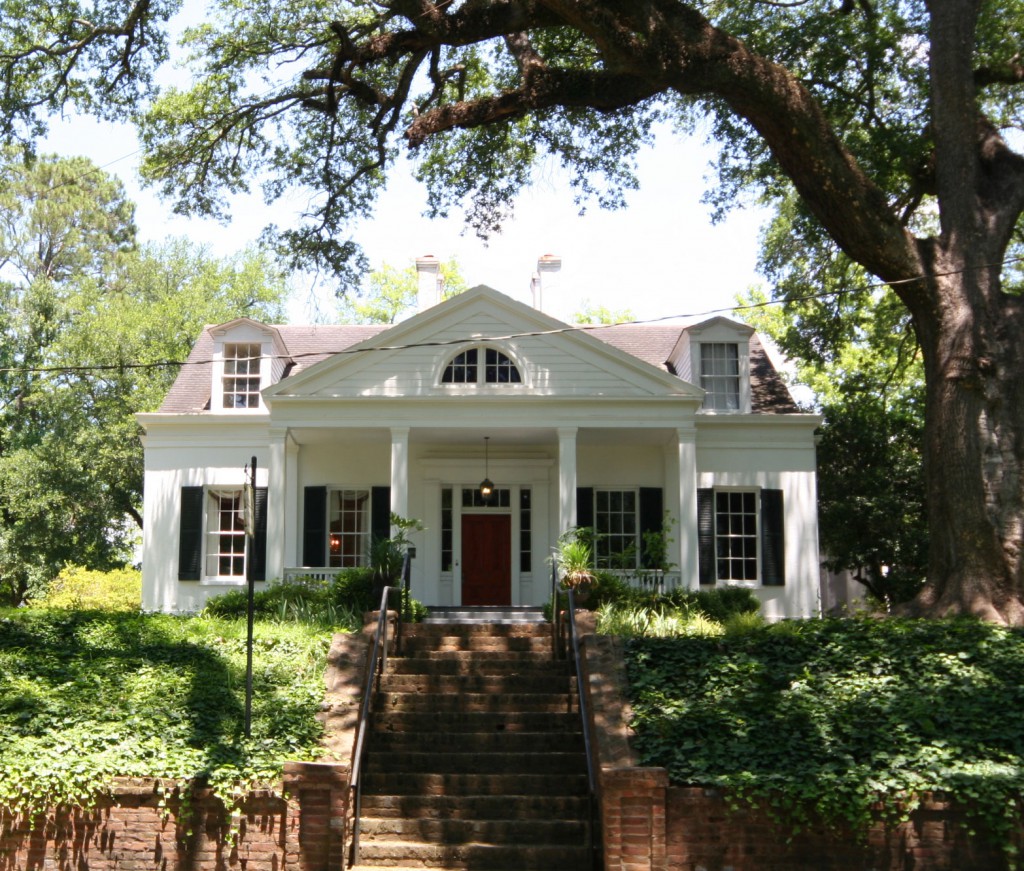 Twin Oaks, home of accomplished chef and restaurateur Regina Charboneau, who made sure everyone ate well during our stay in Natchez!

As has been mentioned before, there were similarities among the Natchez sites, perhaps due in part to the compressed time frame in which most were completed (1830-1860).  For some this was due to a heavy preference for precedent, as in the relationship of Choctaw Hall, Melrose, and Stanton Hall to Rosalie.  The feeling of familiarity might also have been there because, as Jim noted, each house was articulated with taste but not overdone.  However, what made every site distinct was that in each instance the owner or builder’s touch was clearly evident in a special detail or the placement of an element that made it unique.  This was most indisputably on display at Longwood, which truly could not be said to resemble the other sites!  But Longwood shares with all of them a dedication to the articulation of detail and a nod to precedent, albeit examples quite different than what inspired the designers and owners of the other sites such as Auburn, Dunleith, Green Leaves, The Burn, or Twin Oaks!