This is the first in a seven-part series on Parisian architecture and urban design’s influence on Thomas Jefferson and how France affected the built environment in America.

Jacques Levet received the J. Neel Reid Prize from the Georgia Trust for Historic Preservation in 2016, enabling him to travel to Paris and explore the connection between Jefferson’s experiences in France and American architecture. In the 1780s, Thomas Jefferson spent several years in Paris as the Minister to France. Upon his return to America, Jefferson helped direct what was to become part of our nation’s architectural tradition at a crucial time in its development.

Jacques visited Paris this spring to learn how its architecture and urban design influenced Jefferson, and in turn, how France affected the built environment in America. This series will visit many of the buildings Jefferson admired and demonstrate how his travel experience was to have a profound impression on America, both through his built works and his leadership in the architectural profession. During these posts, we will look at buildings in Paris and Nîmes, France. Then Jacques will take us to Vaux-le-Vicomte and Château de Versailles. Our tour will end with Jefferson’s own work at Monticello, the University of Virginia, and Poplar Forest in Virginia. 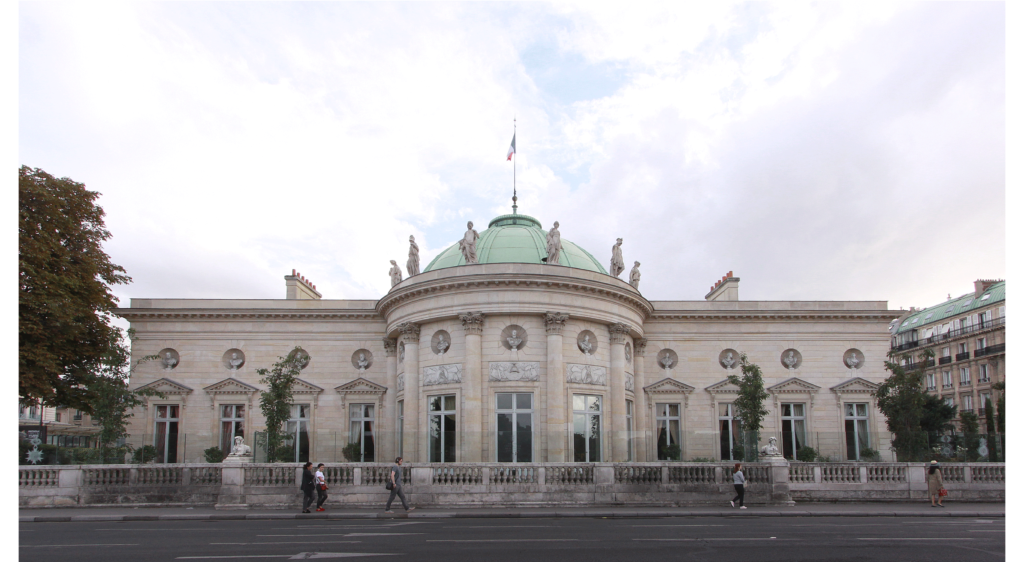 Thomas Jefferson adored the Parisian L’Hôtel de Salm located on the Seine, now the Palais de la Légion d’Honneur, and wrote he was “violently smitten” with its design. Jefferson would reference the hotel’s plan and massing to construct his second Monticello, the one we see today, as a truly “modern” home. 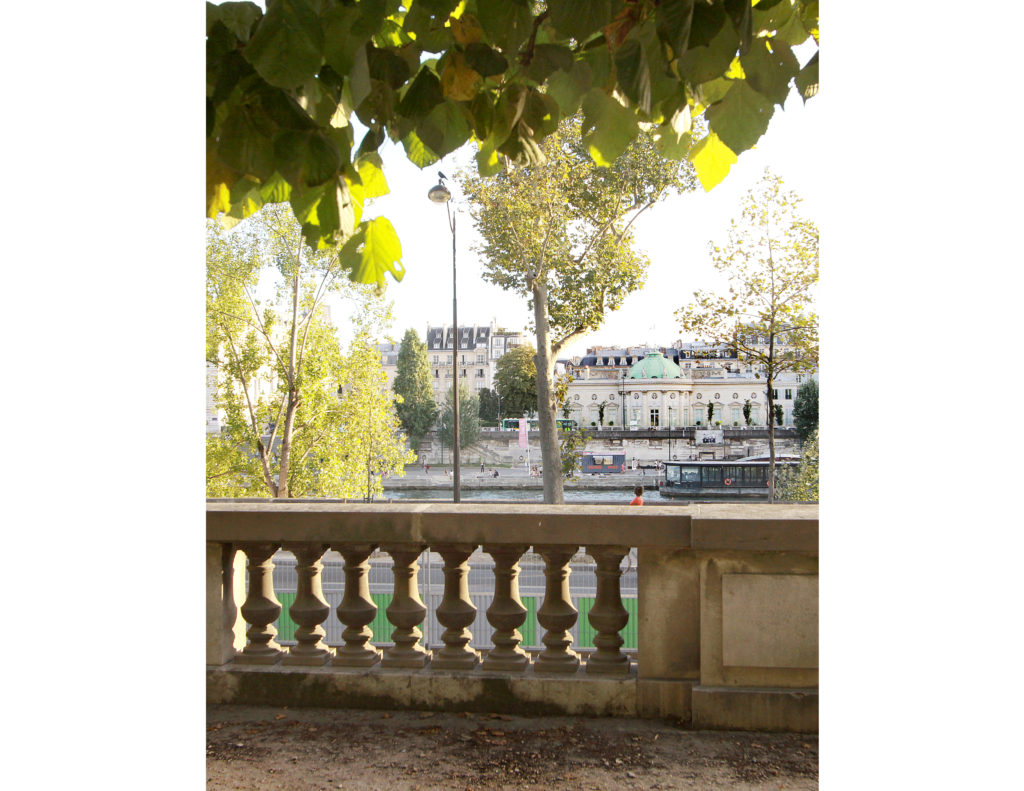 View of the L'Hôtel de Salm from across La Seine

During his time in Paris (1784-1789), Jefferson visited the Jardin des Tuileries almost daily and sat on the parapet to view L’Hôtel de Salm from across the river. He complained he would hurt his neck while twisting to view the “object of his admiration.” *While we are here, look very closely below the dome and note the central French door. We will come back to that later in this post. 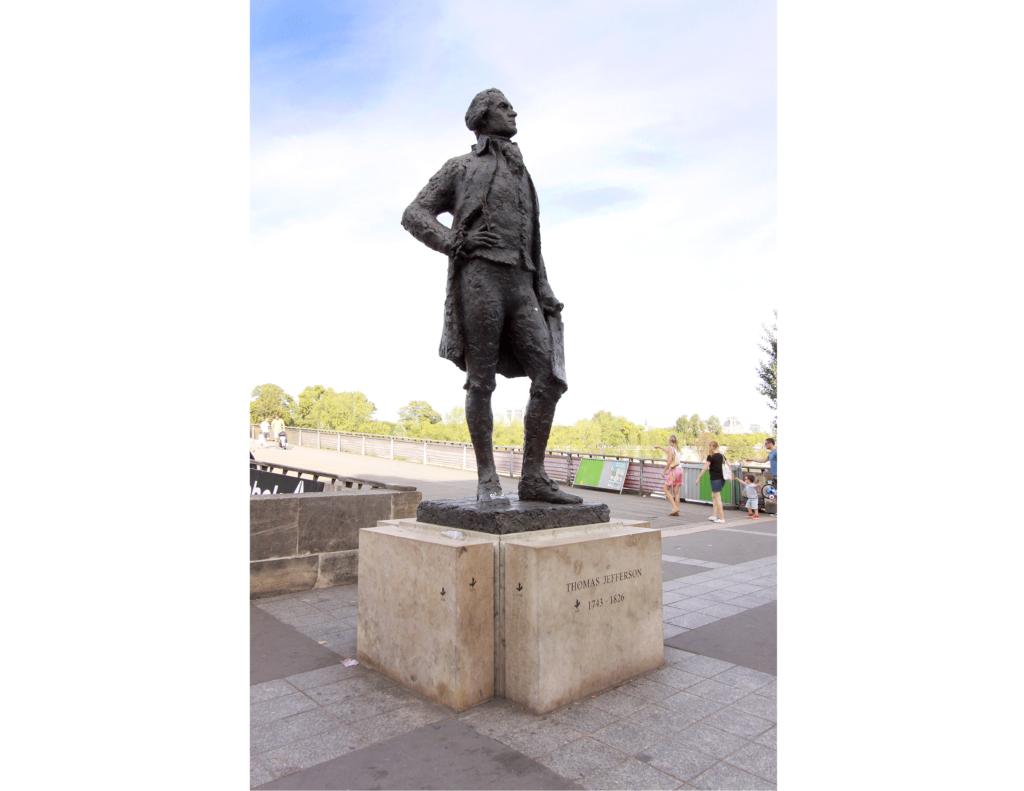 Today, a statue of Thomas Jefferson stands just outside of his beloved L’Hôtel de Salm, holding a piece of paper with his pre-Paris Monticello design.  The “new” type of French planning he experienced personally, along with the complex section of the palace, greatly changed the way Jefferson envisioned his own home. More about the first Monticello. 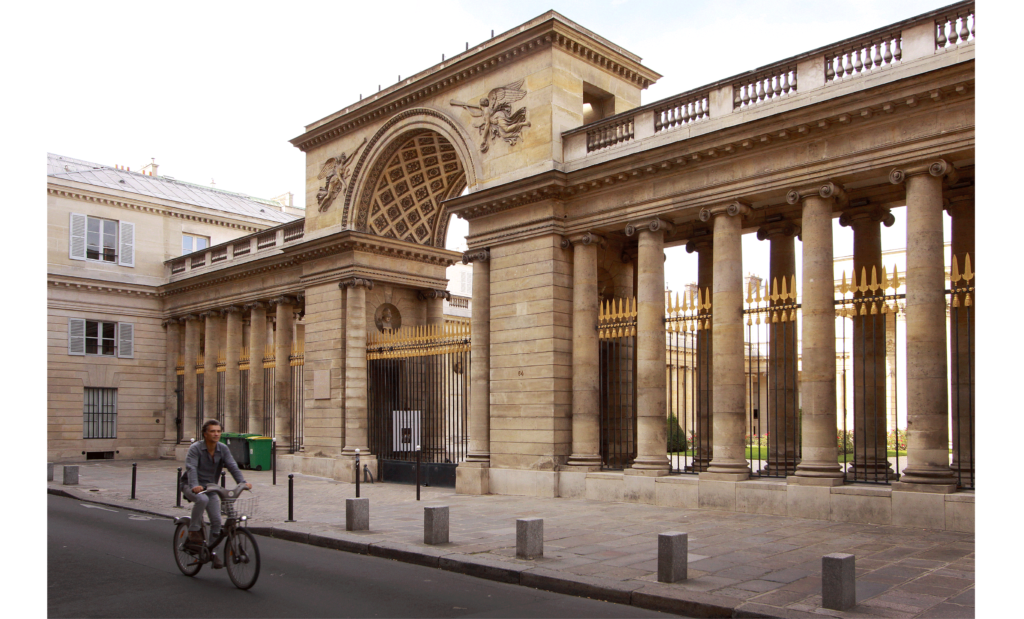 The entry gate of L’Hôtel de Salm is a fantastic triumphal arch which opens the court to the street. 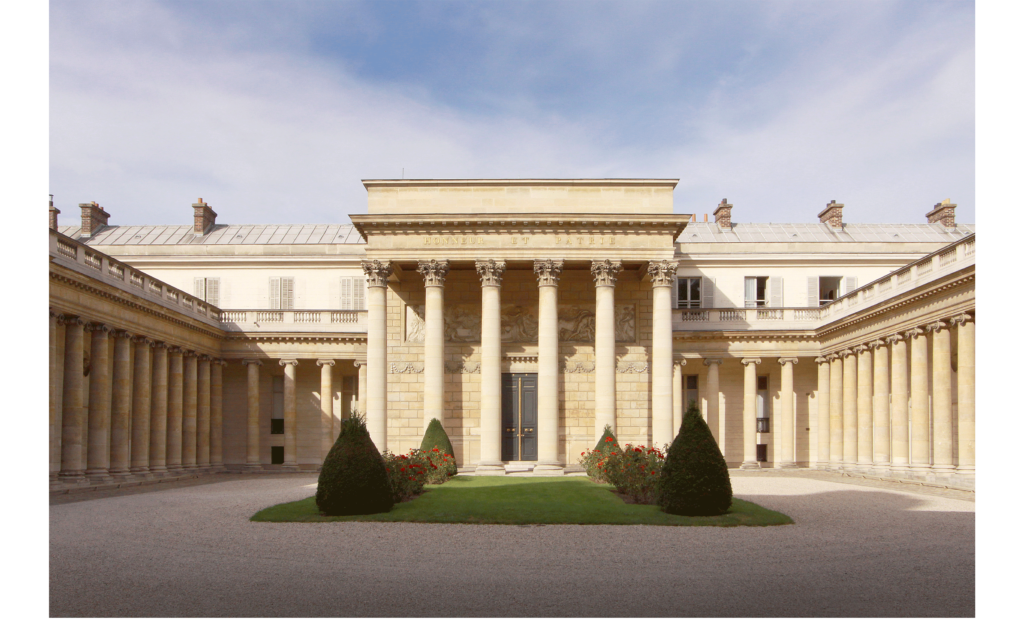 The colonnaded entry of L’Hôtel de Salm exhibits a more modern, neoclassical quality of French architecture, articulating a pavilion within the court. 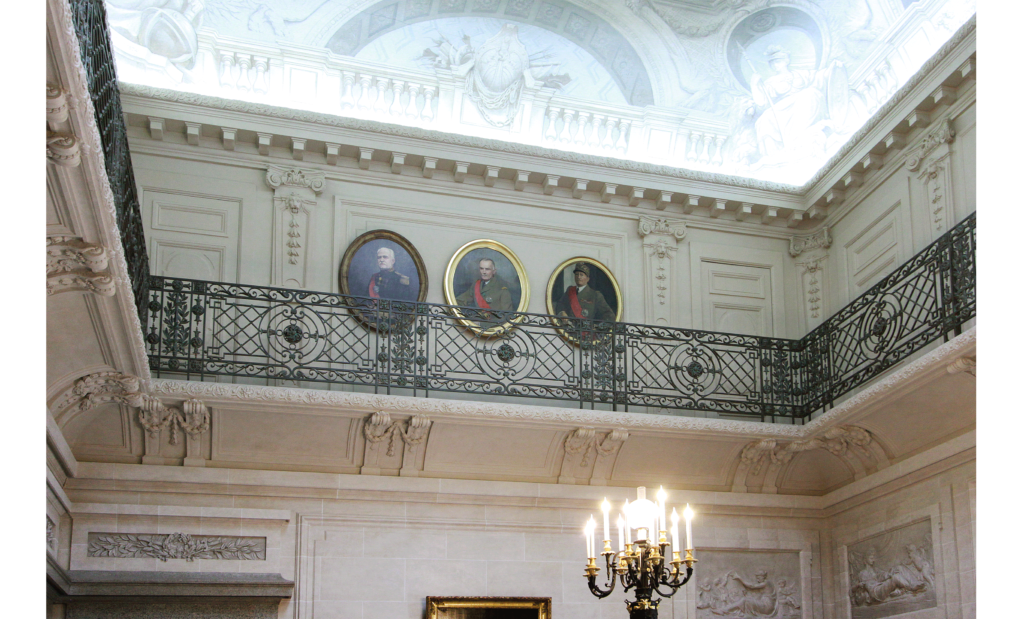 Interior view of the Entry

The entry room is a double height space accommodating a catwalk, much like Monticello, to connect the upper floor rooms on either side. 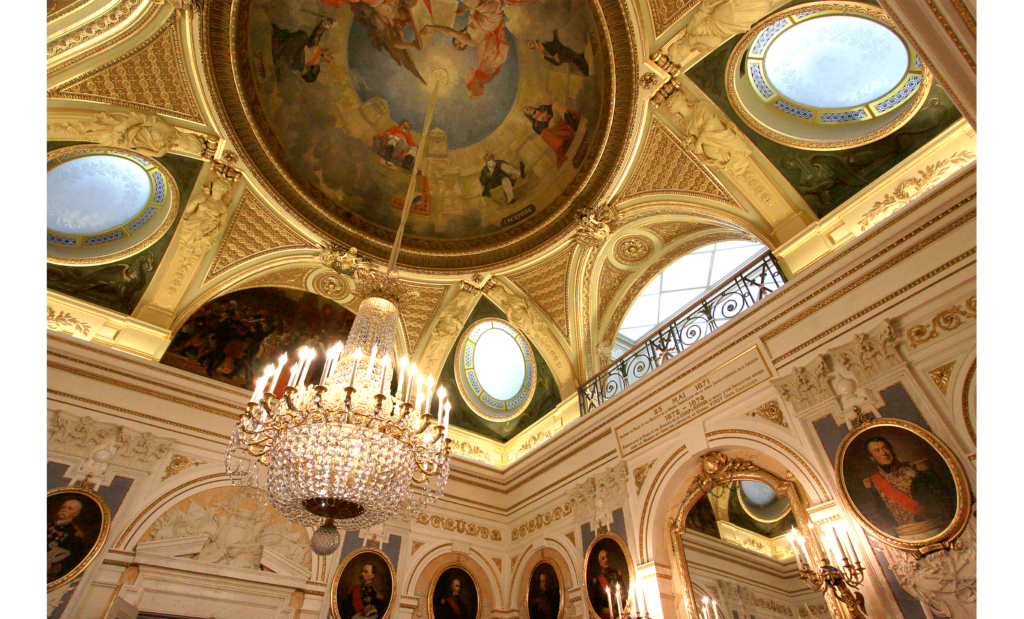 The interior of the hotel, now known as the Palais de la Légion d’Honneur, contains an amazing series of rooms with various types of skylights and painted ceilings. 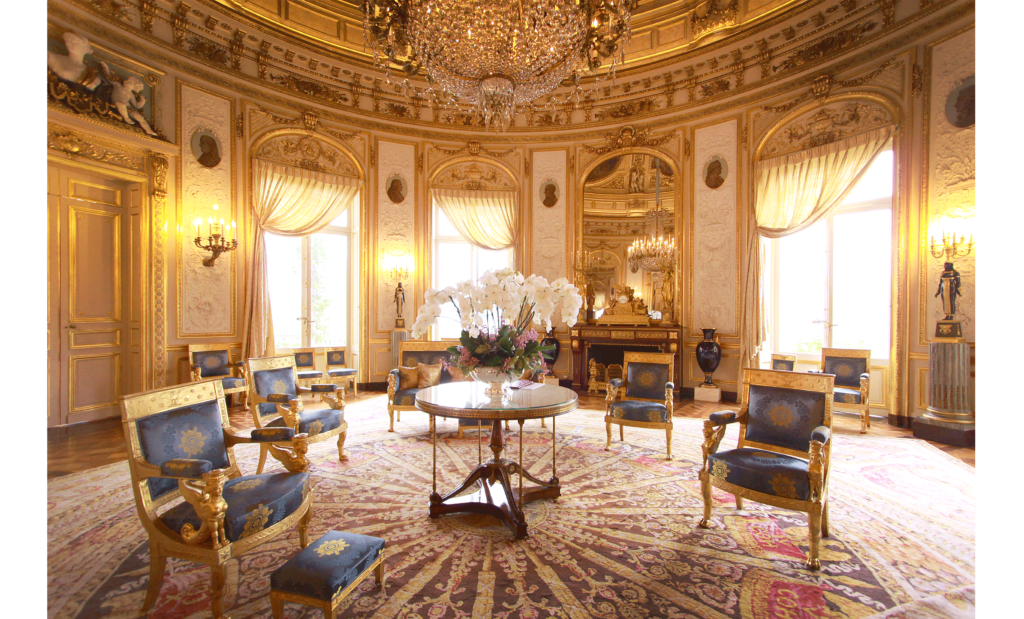 The main room under the dome has a large collection of French antique furniture and views to the Seine.  Jacques was quite surprised to discover the fireplace terminating the interior axis from the entrance was placed in the middle of the façade.
*Take another look at the elevation seen from across the Siene (image no. 2 in this post). The fireplace is disguised behind the central French door!