This is the fifth in a seven part series on a precedent tour to Natchez, Mississippi with the Institute of Classical Architecture & Art’s Southeast Chapter. 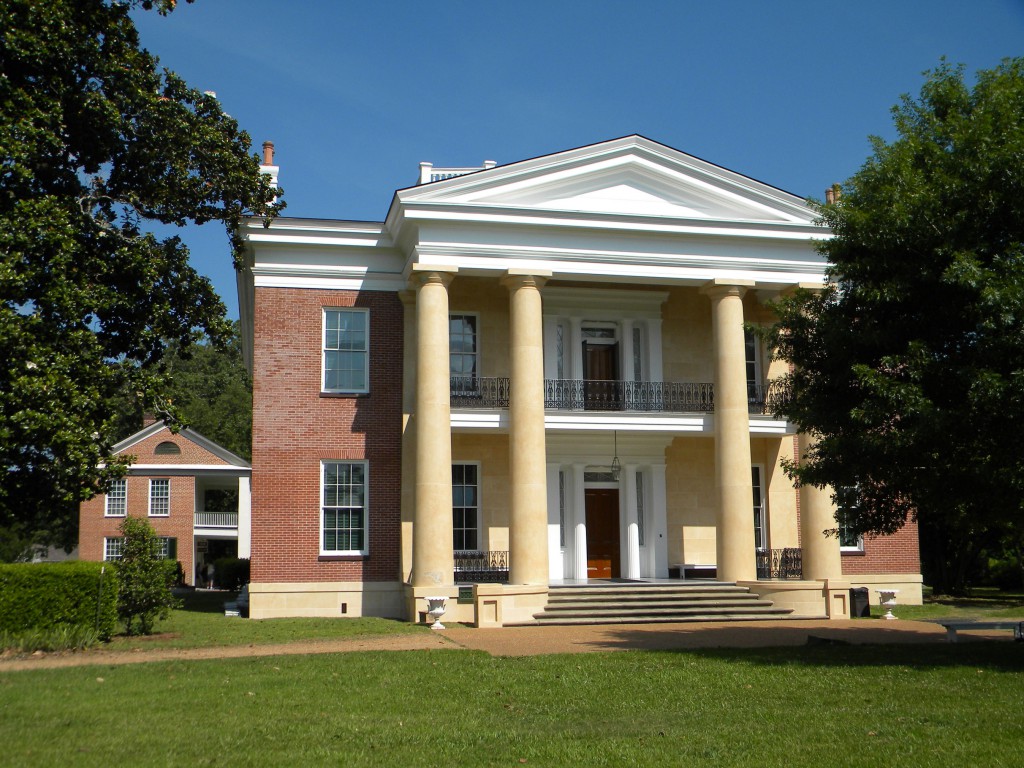 We visited Melrose on a gorgeous afternoon on our third day in Mississippi. It was designed by Jacob Byers, a Maryland-born architect, and is said to be the only Greek Revival-style mansion in Natchez without Federal elements or Italianate suggestions. The National Park Service* claims Melrose is the most intact antebellum estate in the United States. In the late 1840s Melrose was considered one of the finest homes in Natchez.

Surrounded by a cluster of buildings, Melrose was built on the highest point of land near the center of the property to signify its hierarchy. The proportions of the two-story house are more horizontal than vertical, allowing it to capture breezes flowing west through the entrance to the rear galleries. The plan is arranged around a central hall, and the first floor consists of a dining room, drawing room, parlor, library, and areas for service.

In typical Natchez fashion, the red brick house was stuccoed and scored to look like stone. We had the good fortune to witness the exterior marbleizing being expertly and exquisitely restored during our tour. The front façade of Melrose features four massive unfluted Doric columns on the full-height entry portico. The entire rear façade is spanned by a deep two-story porch with six giant square Doric pillars. A hidden hallway and stair screened the movement of house slaves. 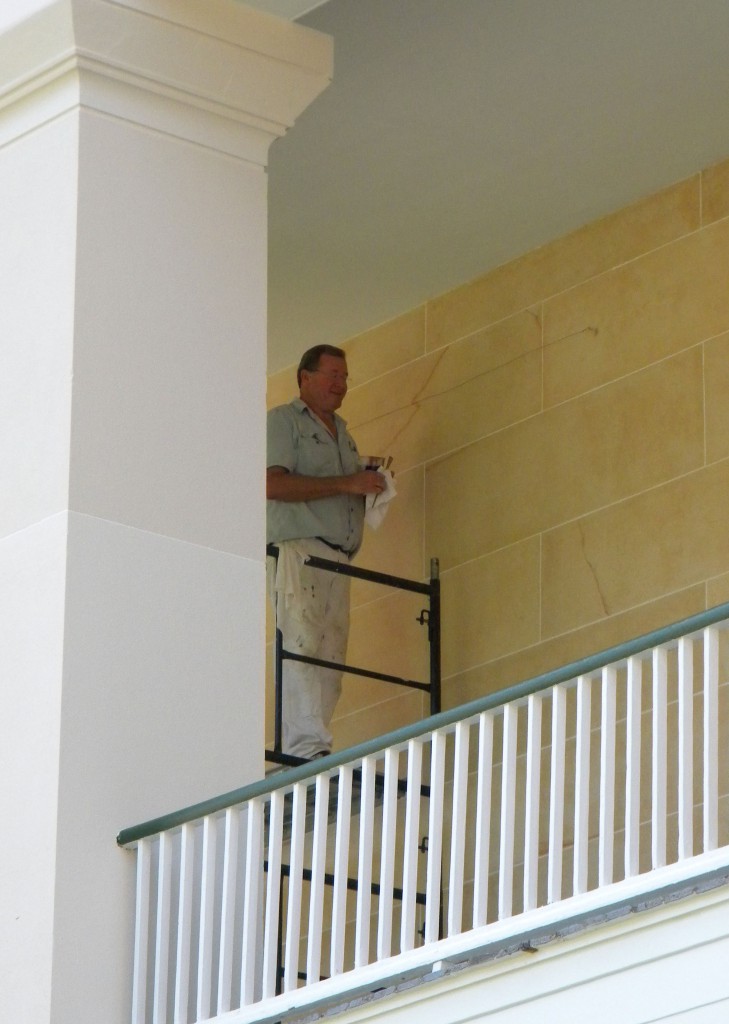 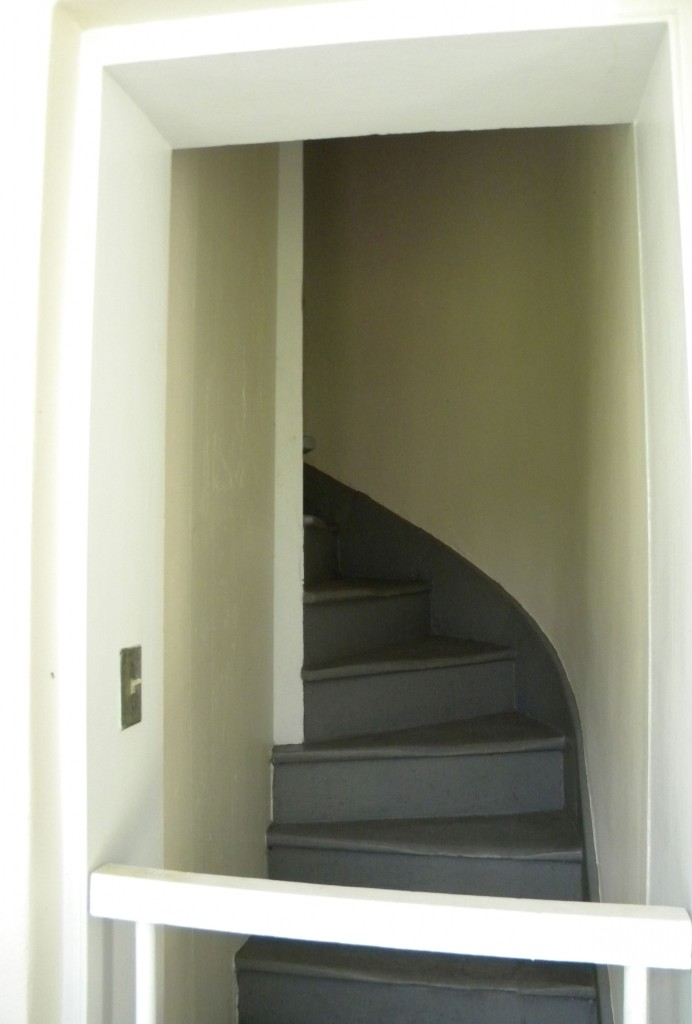 Due to a truly limited succession of owners the estate has remained relatively intact, and it is impressive that so many of Melrose’s dependencies are still standing. These include six structures arranged in a formal and symmetrical grouping to create a rectangular yard at the back of the house. Closest to the back porch, a pair of similarly massed two-story brick buildings face each other across the yard. One was a kitchen with slave quarters above and the other a dairy/laundry – also with slave quarters above. Perhaps their close proximity to the main house was the reason such utilitarian buildings are so handsome; made of brick, with four large double-height columns, and deep porches on the upper levels. Each of these are flanked by an unusual lattice-covered octagonal cistern. A brick smoke house was placed beyond the cistern next to the kitchen, and a brick privy with similar massing was placed across the yard on the dairy/laundry side to complete the mirrored effect. 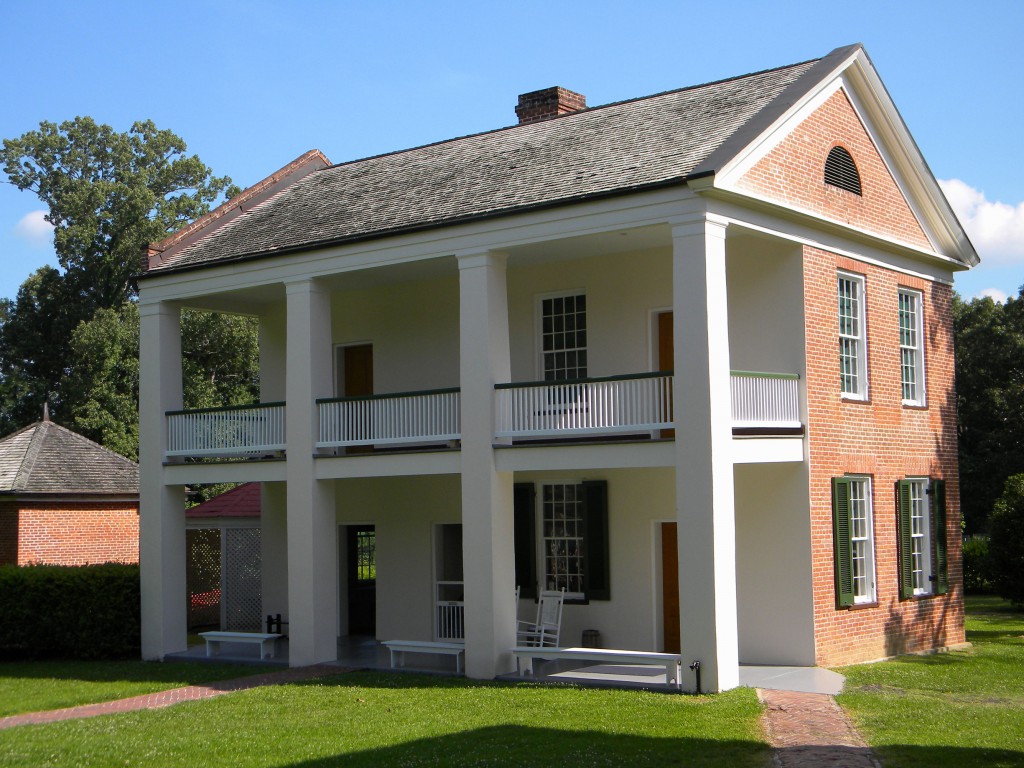 The dairy/laundry building with slave quarters on the top floor 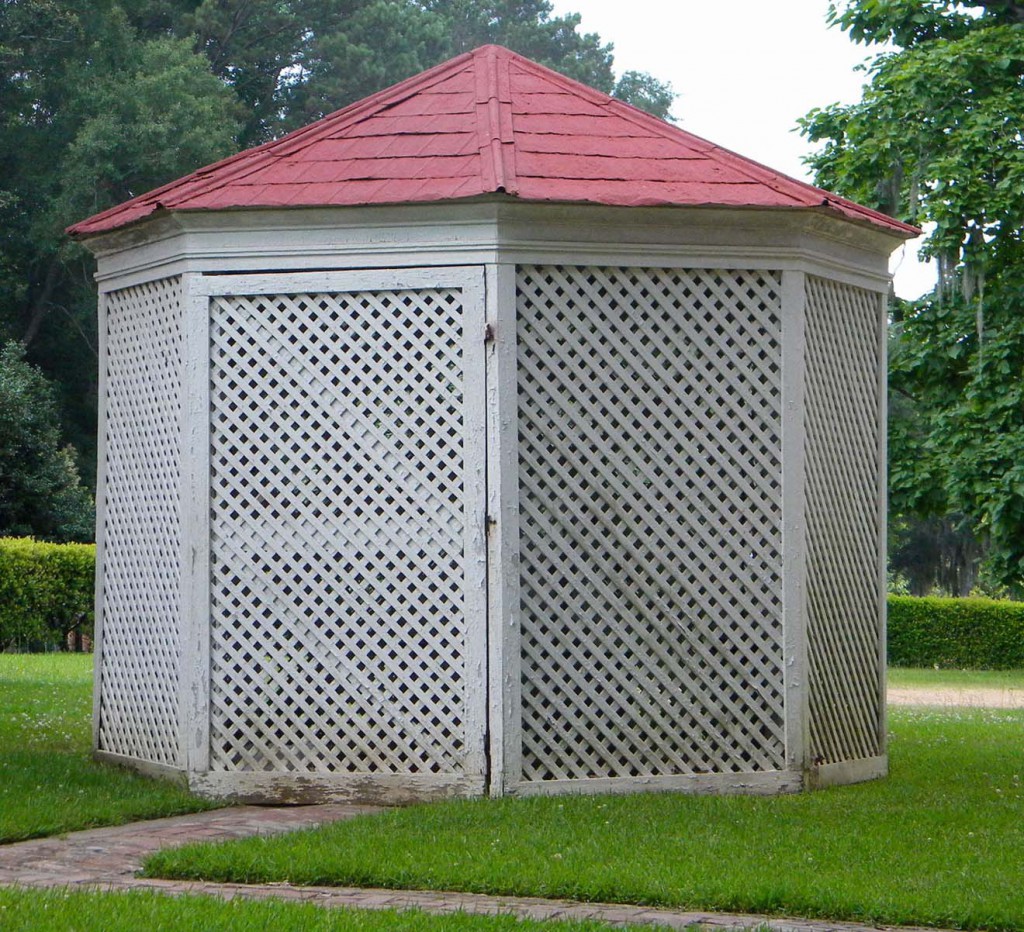 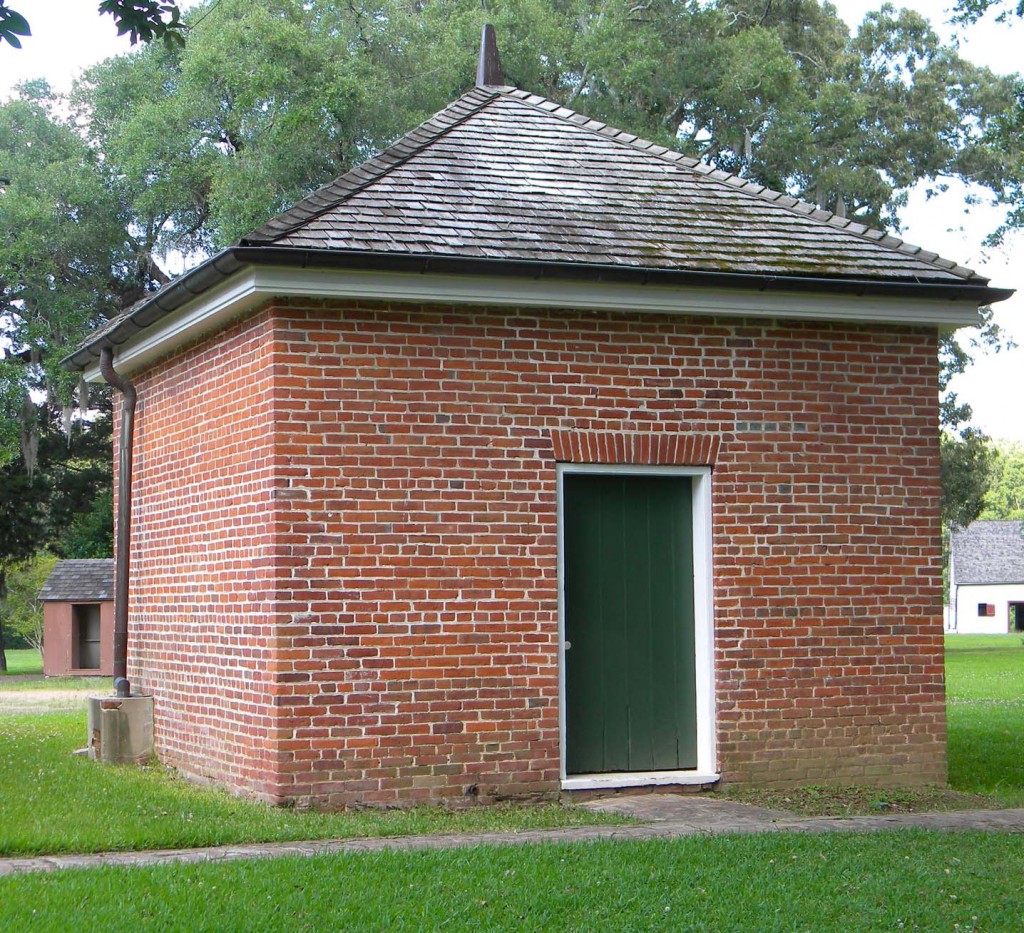 The cistern and smokehouse

Beyond the open end of the court are several other outbuildings for livestock, carriages, tools, and other purposes. These include two, remarkably well-preserved slave’s quarters located just out of sight. The structures are much simpler in execution than those adjacent to the main house and built primarily of wood.

Suzanne, the resident equestrian at Historical Concepts, was especially pleased to be able to go into the barn/stable, which still has what she assumes is the original configuration; six tie stalls for horses – each with a manger and window – along one side. There is an enclosed open space along the other side with stairs to the hayloft going up from the center. The simple shape of the tool shed is just barely visible behind the barn/stable (see photo below, left). 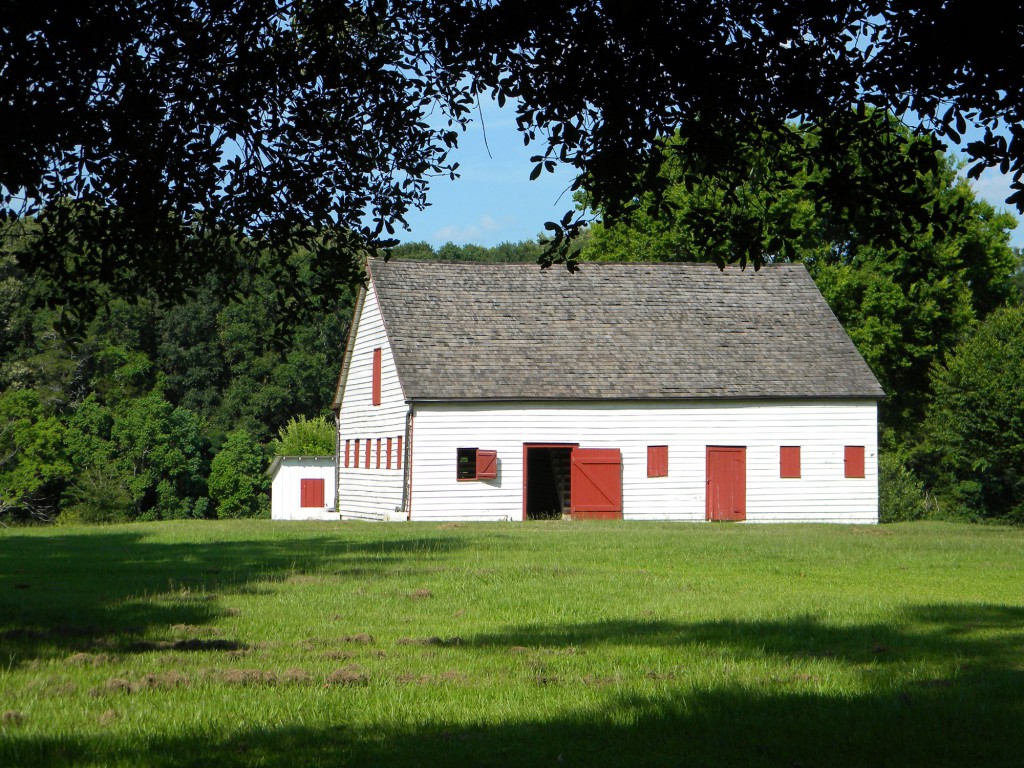 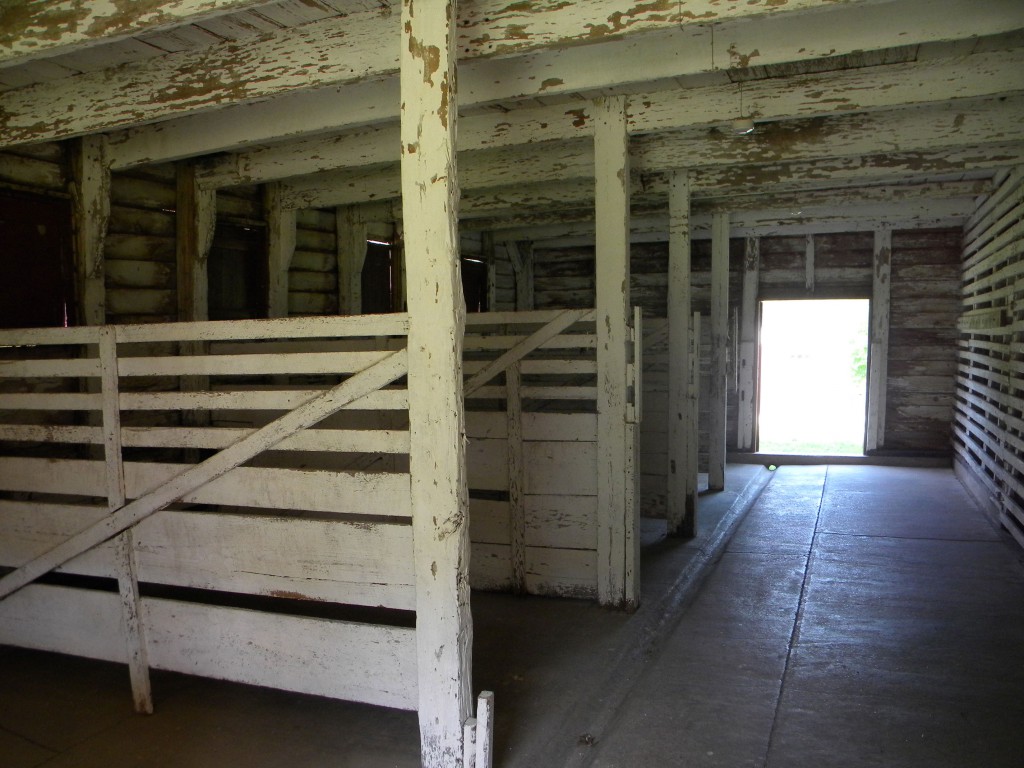 Exterior and interior of the barn/stable

The carriage barn, however, was Suzanne’s favorite dependency, as it’s immediately obvious that special attention was paid to this building. The side facing the drive to the Melrose main house has an elevated Greek Revival style that one wouldn’t expect to see in agrarian architecture. Four strong pilasters support elliptical architraves. The shapes are repeated in the tops of the tall red doors and accentuate the verticality of the building. There is butt board siding on this wall, where the rest have common lap siding. A half-round louvered vent in the tympanum is divided vertically into three parts and the louvers in the corners are arrayed in a sunburst pattern. The overall effect is just delightful! 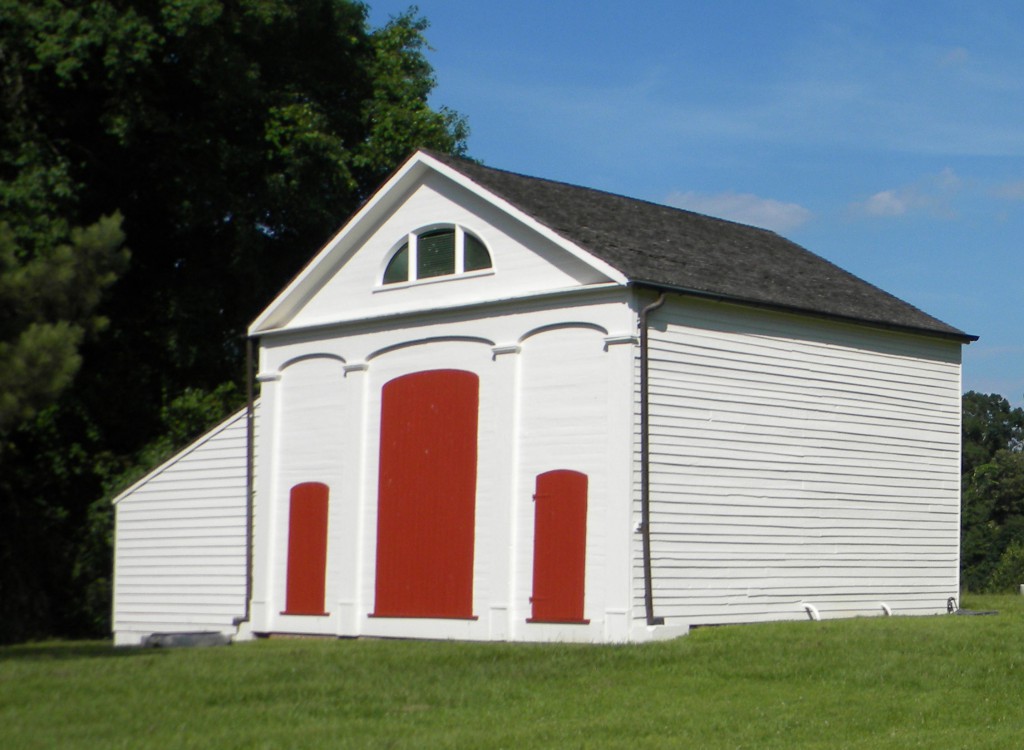 The carriage barn at Melrose

The grounds at Melrose have an aspect of the English park landscape; a mix of ornamental grounds, naturalized plantings, and defined work areas in which the house is set. Mature oak, magnolia, catalpa, and pecan trees are placed on either side of the house and embrace a vast lawn at the front which is skirted by the winding approach drive. Here, the arrangement of the main house and dependencies within the landscape is said to typify the “suburban villa estate,” one of the fancies of a “Cotton Kingdom Estate.” 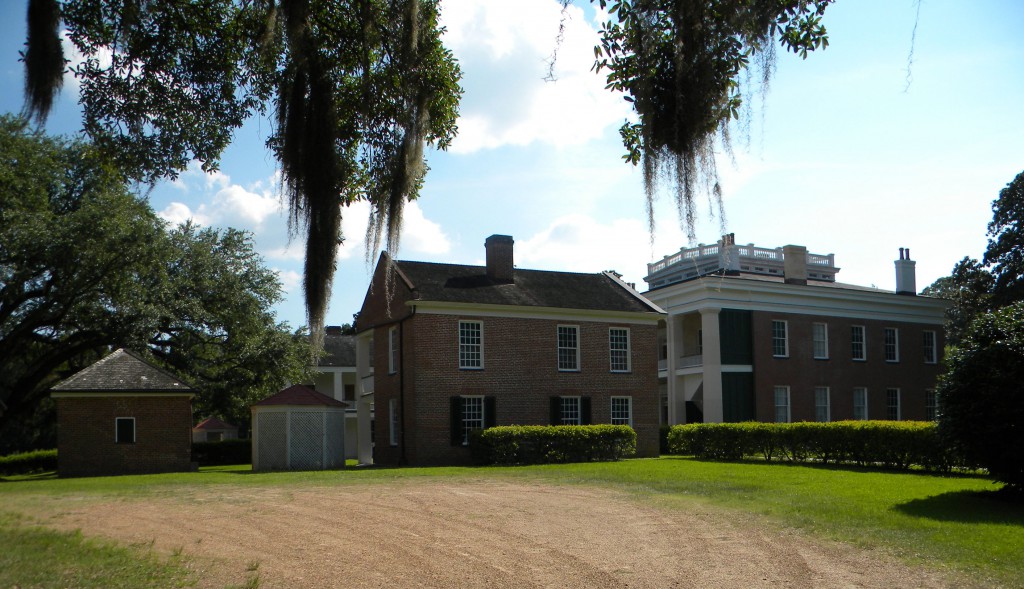 View of privy, cistern, dependency and back of the main house from the side

** Melrose is owned and maintained by the National Park Service as part of the Natchez National Historical Park.