In the following post, we explore parts of Chicago best-liked by our excursionist Becky Sigman, which she revisited during a recent stay with friends. Becky enjoys being out of doors and we experience her version of ‘urban nature’ in this city of 2.7 million people. Let’s accompany Becky through the Gold Coast and The Loop, ending our journey in Belmont Harbor.

Becky states the Gold Coast, with its tree lined streets and lovely historic homes, is simply a Chicago “must.” As the name implies, this is one of Chicago’s most affluent neighborhoods. The residential architecture is eclectic, encompasses numerous styles, incorporates a variety of materials, and is extremely elegant. 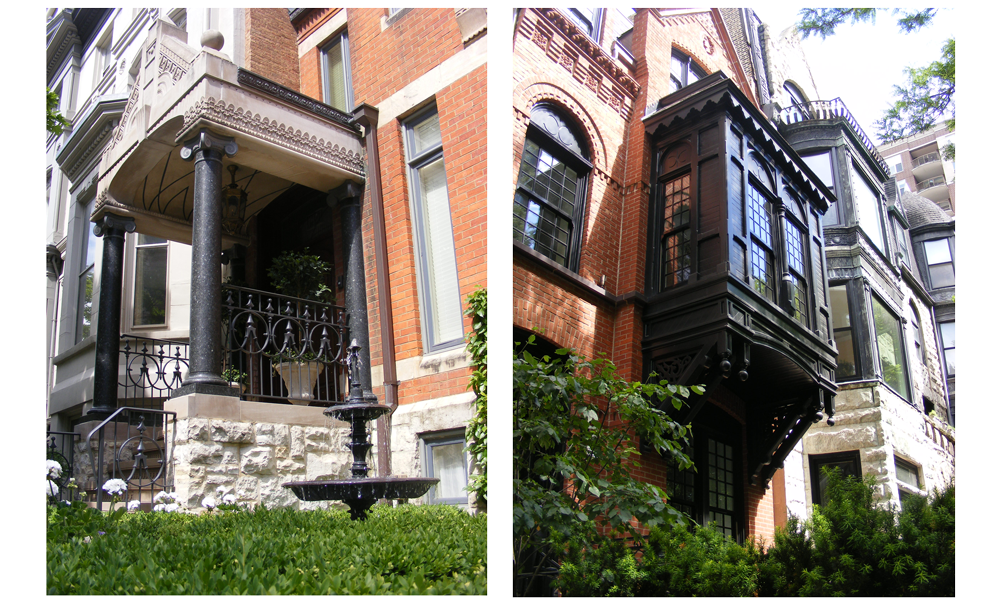 The townhouses seen here are located on the same street, but are distinctively different in character 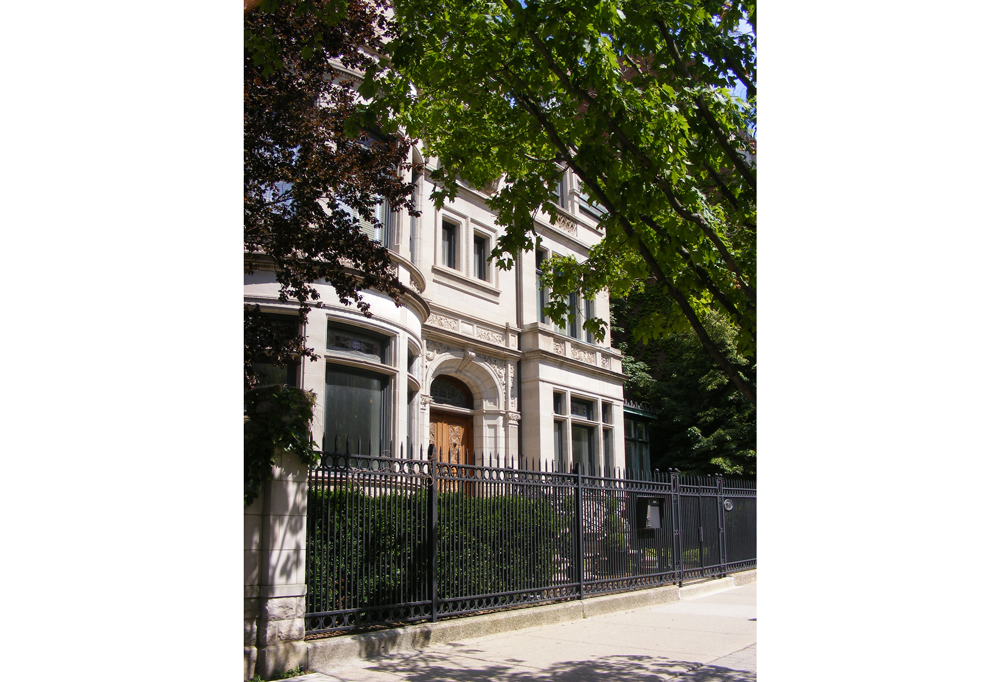 The townhouse on the upper left has an elaborately carved stone entryway; a closer look reveals even the underside of the portico archway has been carefully detailed. The townhouse on the upper right has an Oriel Window, derived from medieval English architecture, which projects from the façade and is supported by brackets. The window is quite large, but adds interest to the massing of the townhouse without overpowering the streetscape because the detailing feels so delicate. Becky would like to call your attention to the window’s “Great shadow lines and beautiful wood detailing, particularly the lamb’s tongue on the corner boards and the intricate tracery in the brackets.”

The townhouse on the bottom has a bay window that addresses the street.  It accomplishes two very important functions. First, it allows in considerable natural light, which is rare in a city townhouse. Second, it tempers the scale of the façade, making the residence feel more human scale. 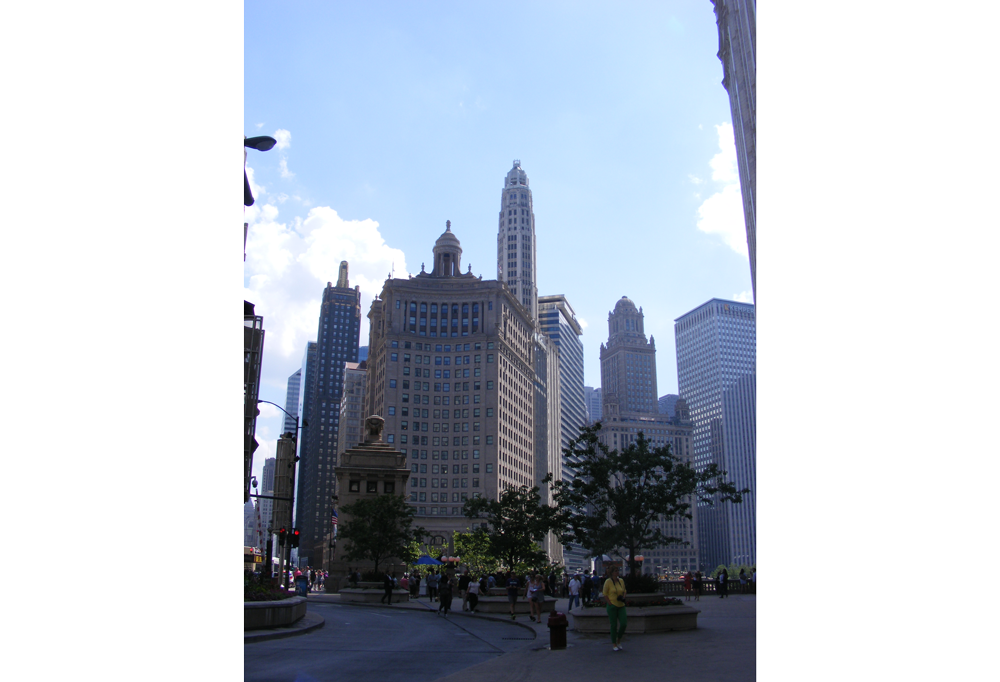 On Michigan Avenue looking across the Chicago River toward London House

The Loop, the city of Chicago’s historic center and financial heart, is a bustling area, particularly Michigan Avenue. One of the things Becky appreciates most about this neighborhood is its very urban scale. The fire of 1871 presented the city with an opportunity to look forward, reimagine itself, and via a series of architectural movements centered in the area, ultimately gave rise to the skyscraper. 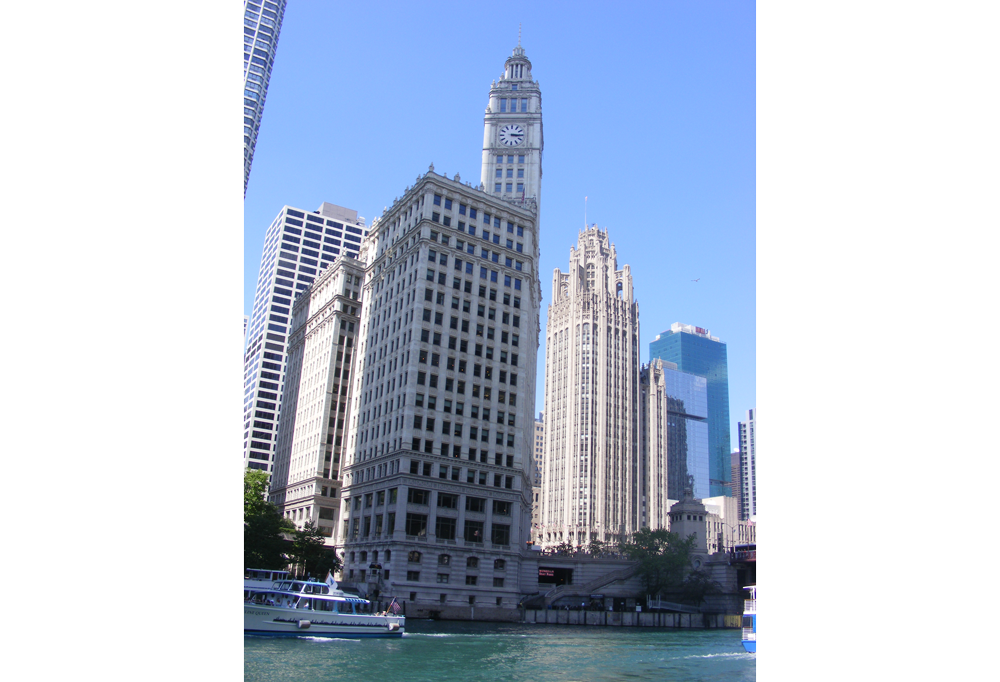 Wrigley Building with clock tower to left, and Tribune Tower immediately to right

The William Wrigley Jr. Building (1919-24) is in fact two structures. The southern building with the clock tower was completed first. The northern building was built later, and as seen in the photo above, was set right on a bend in the Chicago River. The architect was Charles G. Beersman of the Chicago firm Graham, Anderson, Probst & White. On the opposite side of North Michigan Avenue is the Tribune Tower. This building was the result of an international design competition, held in 1922, to honor the 75th anniversary of the Chicago Tribune. John Mead Howells and Raymond M. Hood of New York submitted the winning Gothic design.

Becky also loves to look at the more intricate and beautiful craftsmanship seen in historic high-rises such as the Wrigley Building and the Tribune Tower. In the closeup below, we stand opposite the Michigan Avenue main entrance of the Wrigley Building. 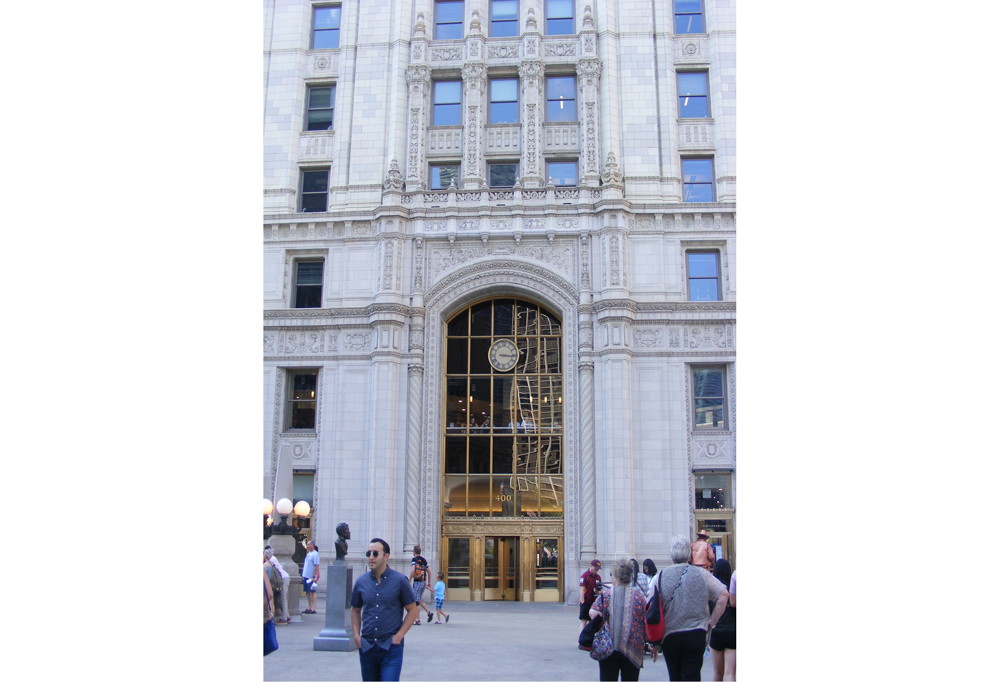 The Father Time clock, circa 1926 seen just below, is attached to the Northeast corner of Jewelers’ Building at 35 East Wacker Drive. The clock was a gift from the Elgin Watch Company, which had offices in the Jeweler’s Building. It is not easy to tell, but the sculpture of Father Time on the top of the bronze clock is 5’ tall! 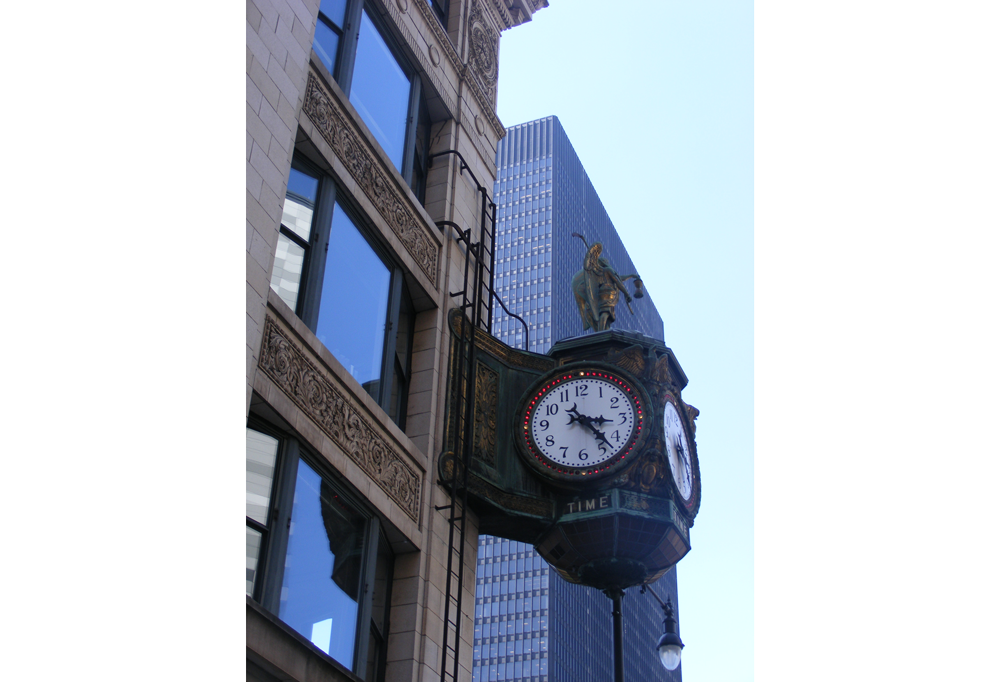 The Chicago Riverwalk is just one of the travel ways where pedestrians are separated from vehicular traffic. The lakefront trail is another. This is an aspect of Chicago’s ‘urban nature’ which Becky finds very hospitable. 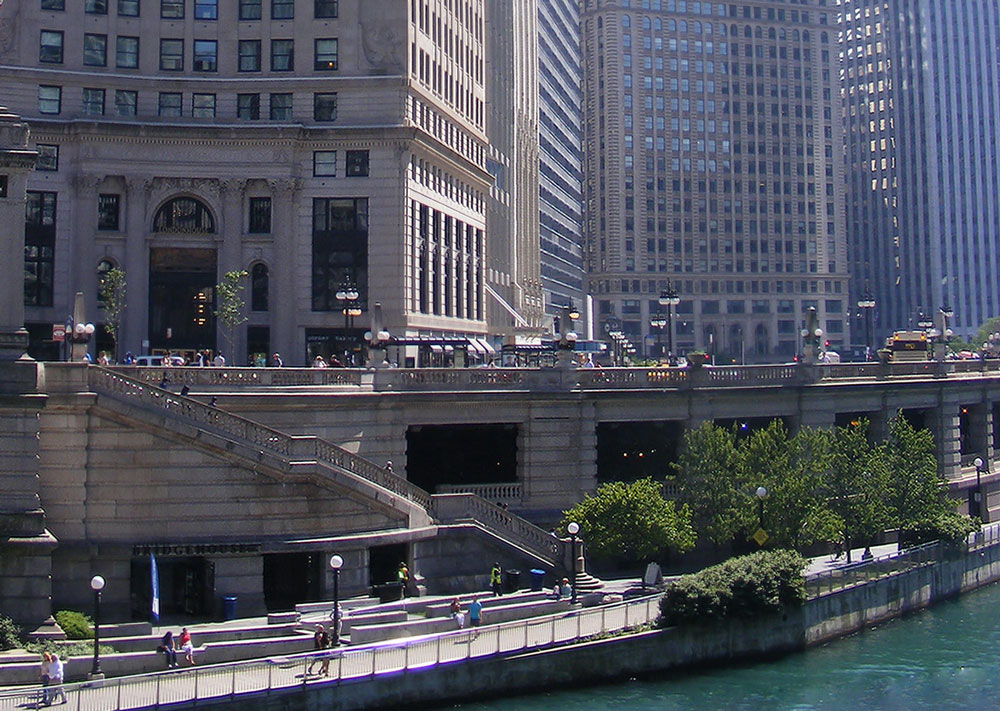 Another stop on Becky’s tour of the Loop was the Chicago Cultural Center. Built in 1897, it began life as the city’s first public library. Charles Coolidge, of the firm Shepley, Rutan and Coolidge, designed the Beaux Arts style building at the request of the Chicago Public Library Board. 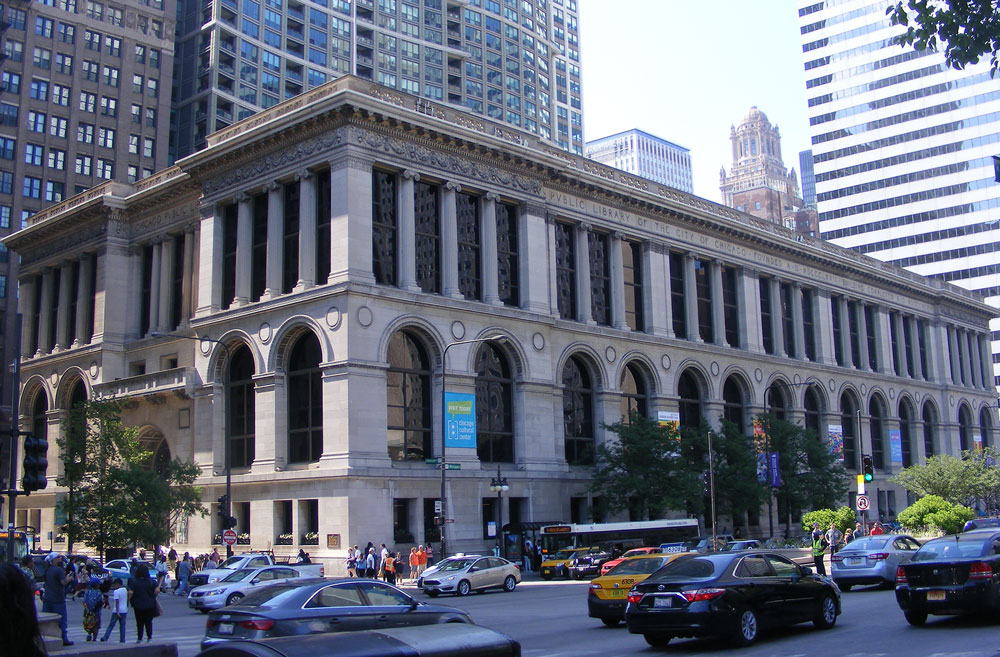 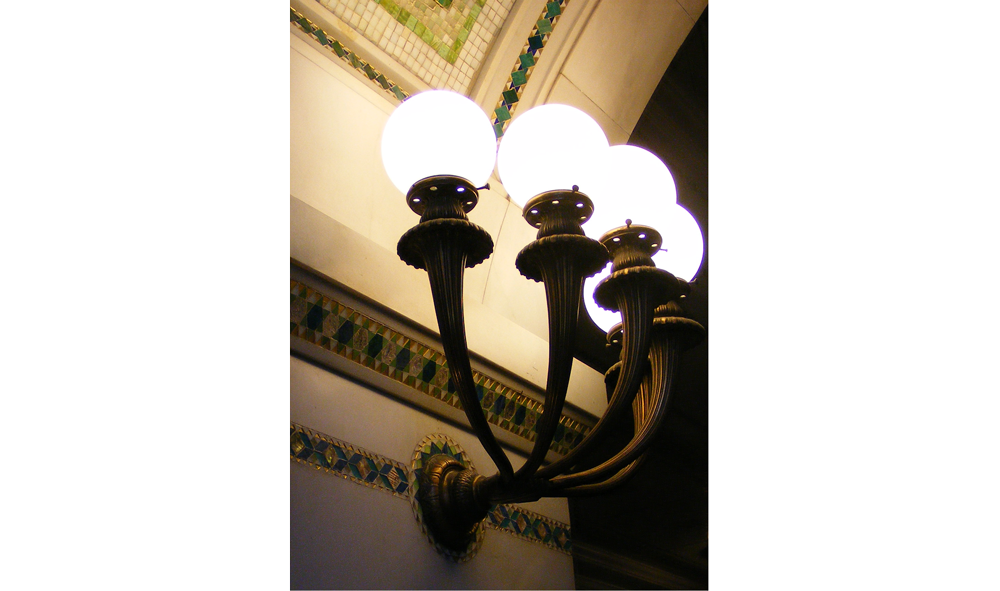 The bands of mosaics seen above were designed by a gentleman named Robert Spencer and executed by J.A. Holzer, a former Louis Comfort Tiffany Studio craftsman. Becky took the photo because she is enamored with the idea of embellishing building interiors with “public art.” Not seen in this post, but worthy of mentioning, is the world’s largest Tiffany glass dome, located on the south side of the building. 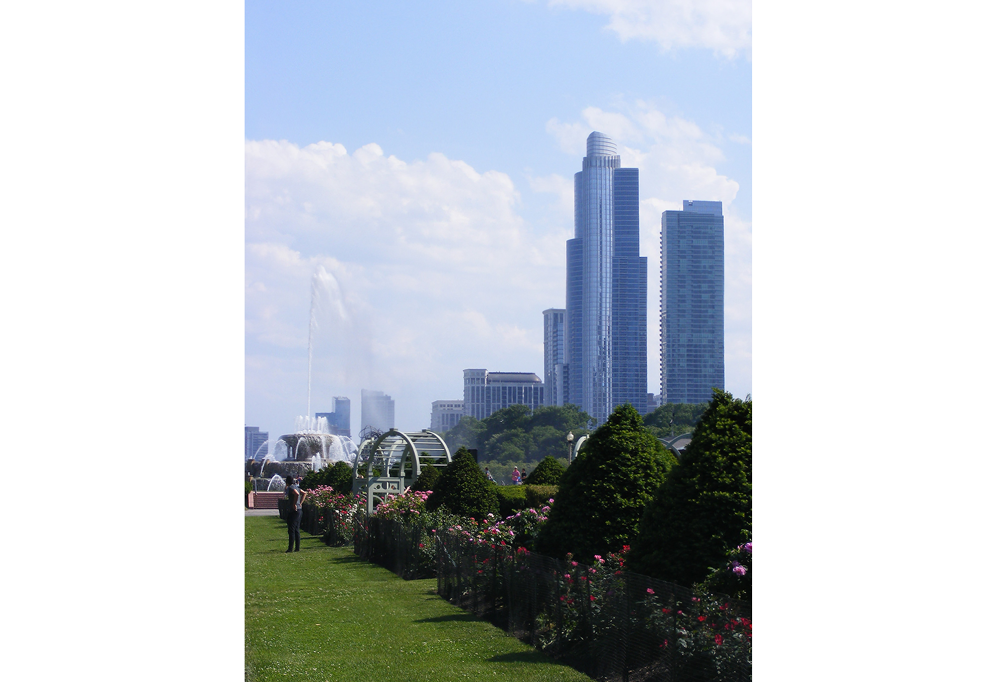 Of Grant Park (technically located in the South Loop), Becky remarks it is a great example of the “contrast between open space and urbanity in the heart of the city.” The Bassin de Latone at Versailles inspired the Buckingham Fountain, a Beaux Arts piece. It was envisioned as an axial termination point in the 1909 Plan of Chicago and is the focal point of the park today.

City skyline from Lake Michigan and maps of the lakefront

Becky has included a photo of the Chicago skyline, taken while walking the lakefront trail next to Lake Michigan, and the accompanying map excerpts from a Lonely Planet guide to Chicago, to illustrate a few ways in which the city embraces the lakefront. 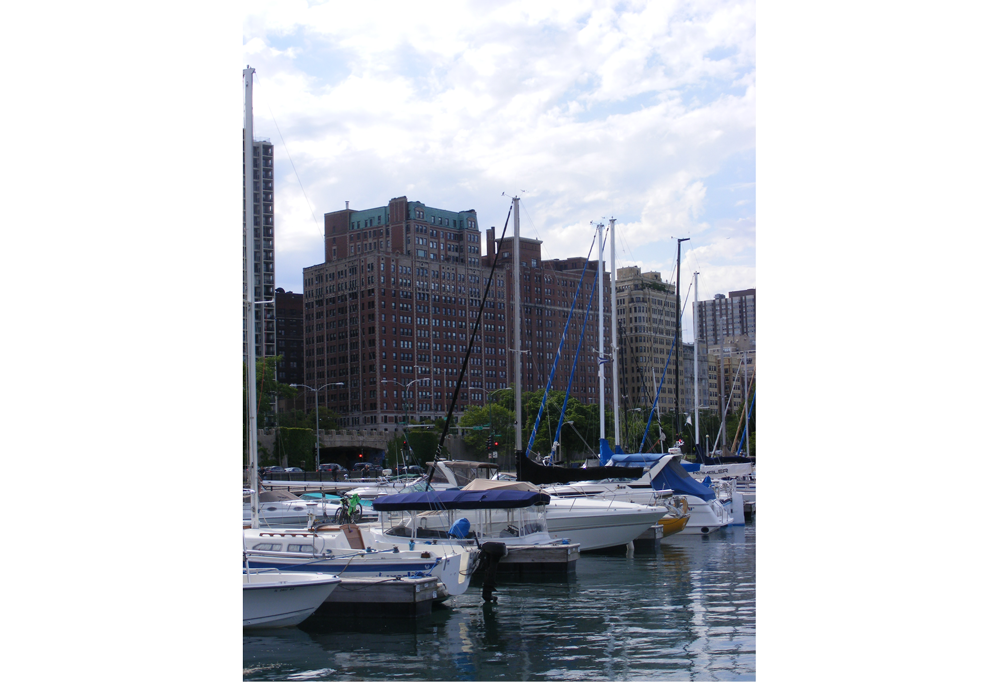 This journey, and our impression of the Windy City courtesy of Becky, ends in Chicago’s largest park. Her northern most stop was Belmont Harbor, located in Lincoln Park.