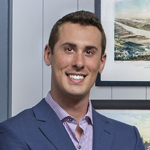 On a trip to Provence, Kellen Krause honed in on lesser-known, lesser-visited areas such as Gigondas and Uzès to explore the nuances and charm of smaller towns in southeastern France.

In setting out to Provence, France last spring, I wanted to tour a region that was top of mind but had not been my first choice in prior trips overseas. There were hill towns to see, vineyards to tour, and ancient urban centers to experience, unique from already familiar neighbors.

The shutters above this beautiful entry in Gigondas are, in my mind, akin to outstretched arms, welcoming visitors while maintaining the home’s privacy. If you look closely, you can see that the region’s beautiful stone is reserved for the entry and windows, while the façade has been covered in stucco and etched to resemble stone. 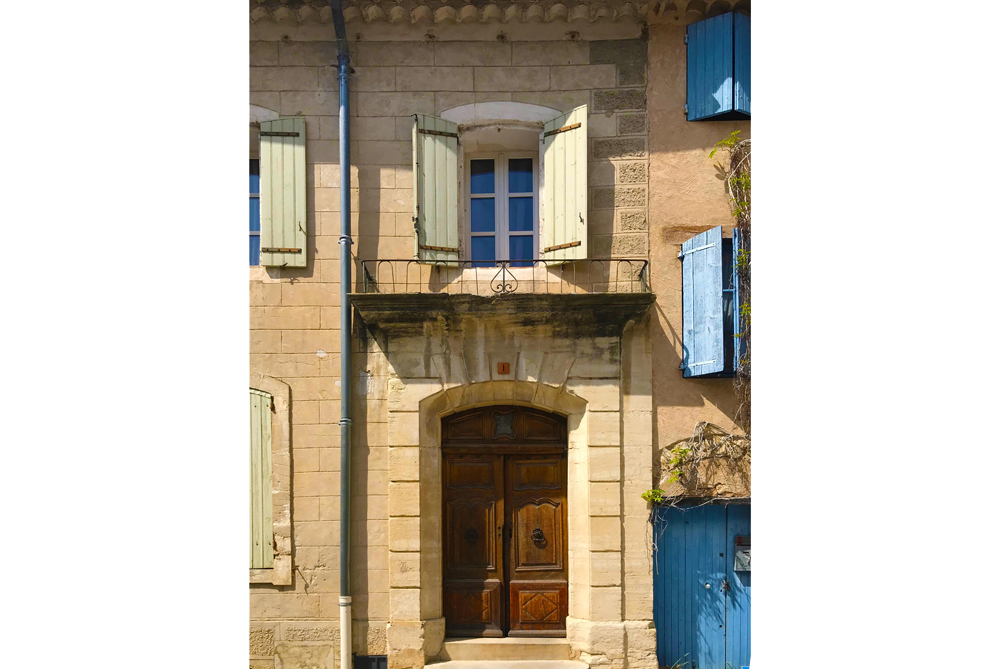 Western culture’s development and the Church are so tightly linked that every major city typically afforded prominent urban sites to both its religious and civic institutions. In Avignon—rich with millennia of history—sits Eglise Saint-Agricol atop a market street and only a five-minute walk from the striking Palais des Papes (not pictured). 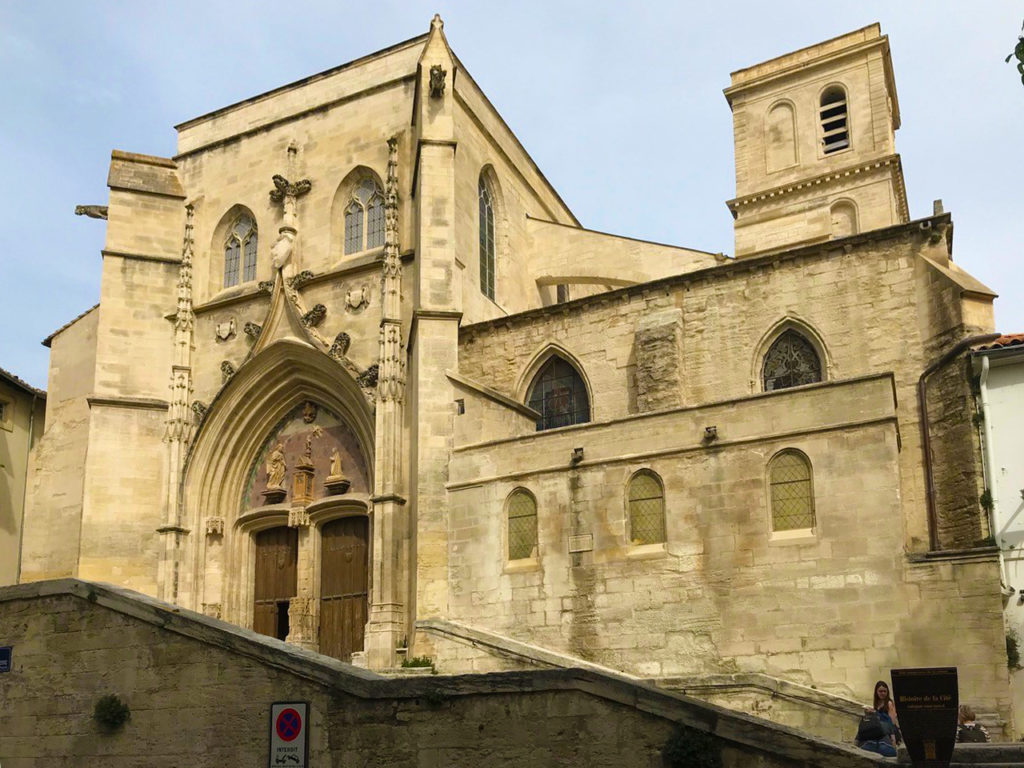 Founded as an oppidum, or an ancient Roman “town” (as opposed to city), Uzès is ringed by a wall and lies at the source of the water supply for Nimes. Its vibrancy, much greater than would be expected from a population of just 10,000, can be attributed to narrow streets, market squares and pedestrian realms mostly free of automobiles. Uzès is truly enjoyed by people living the good life, surrounded not by people in transit, but people enjoying community. 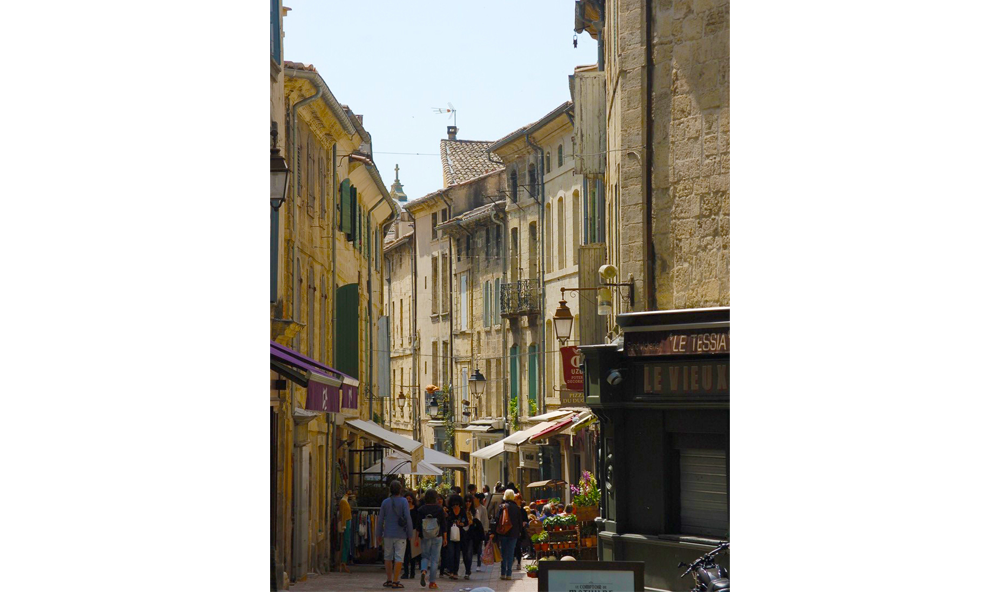 Close to the Italian border, the influence of Nice’s neighbor is layered with competent art deco, classical, and vernacular buildings in a medieval fabric, dating back to the time of Plato and Aristotle. The two photos here exemplify some of this amazing yet harmonious contrast.  Trompe-l’oeil on an apartment building works in the same context of a late-18th century high school not merely because they feature similar motifs, but because they employ timeless principles of human scale and poetic but tectonic expressions of their purpose. 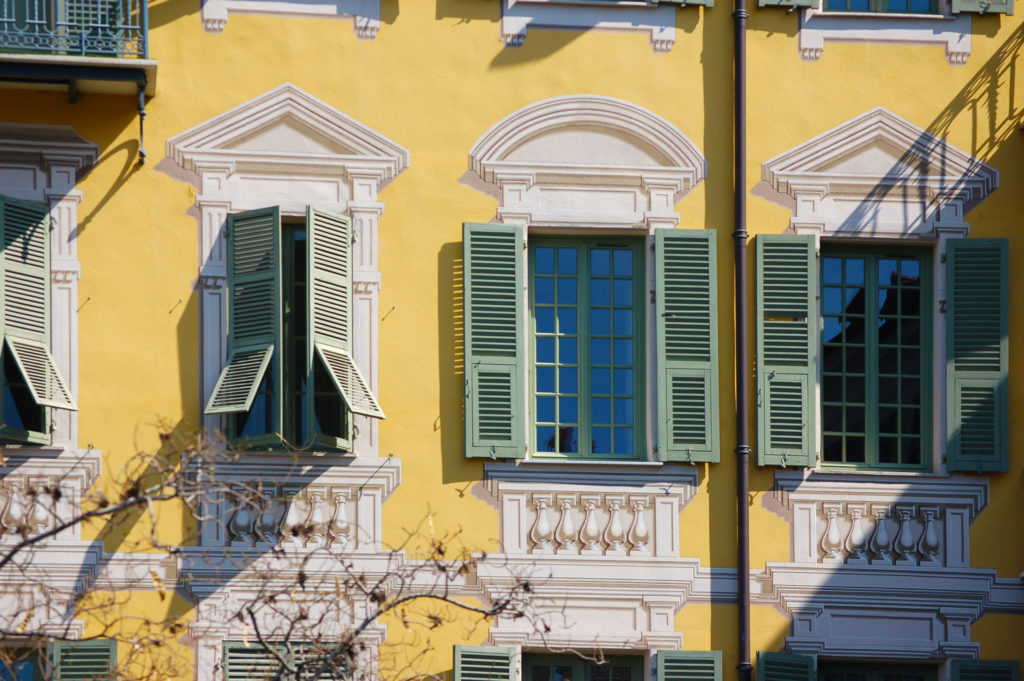 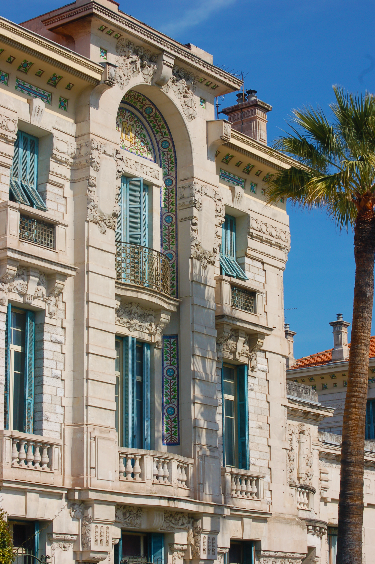 Once a capital to the region, Aix-en-Provence is another town whose history extends longer than two millennia. This photo is of the town hall clock tower, built in 1510, which anchors one square that is separated from its brother by a single building. 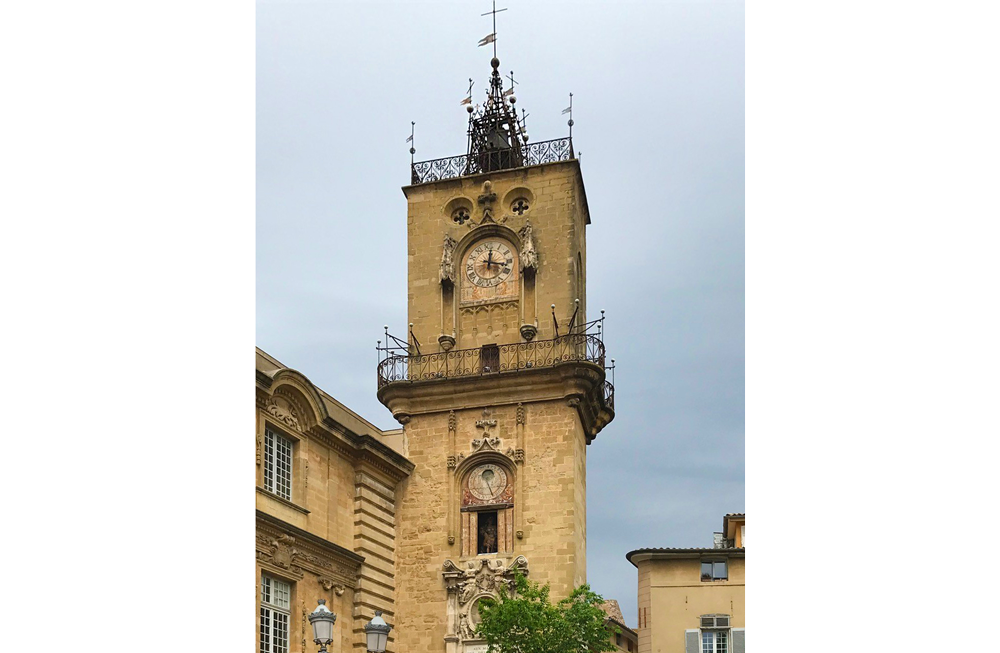 From Our Sketchbooks: Provence

Each morning we gather in our library for a 15-minute sketch exercise.  Sightseeing images are often our inspiration,
subjects which remind us of the vital connection between our daily lives, our history, and our built environment. 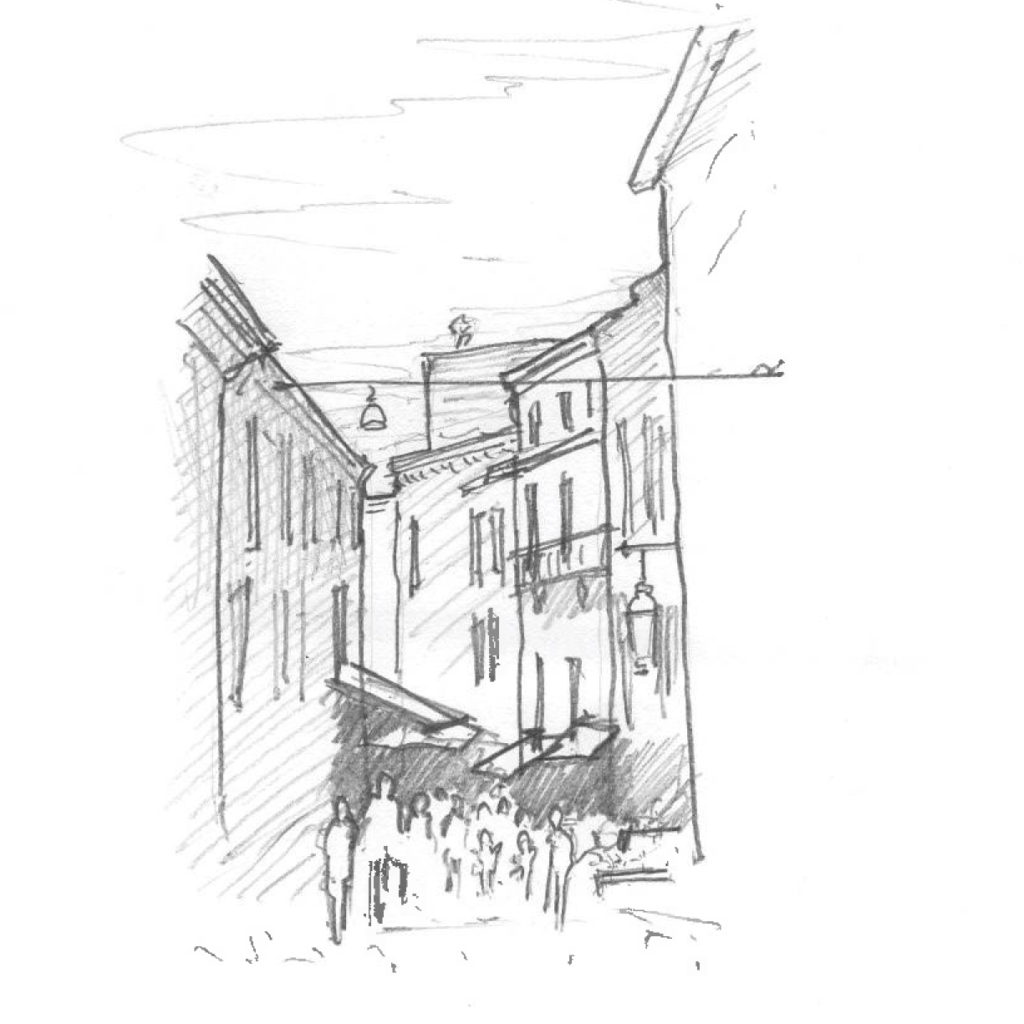 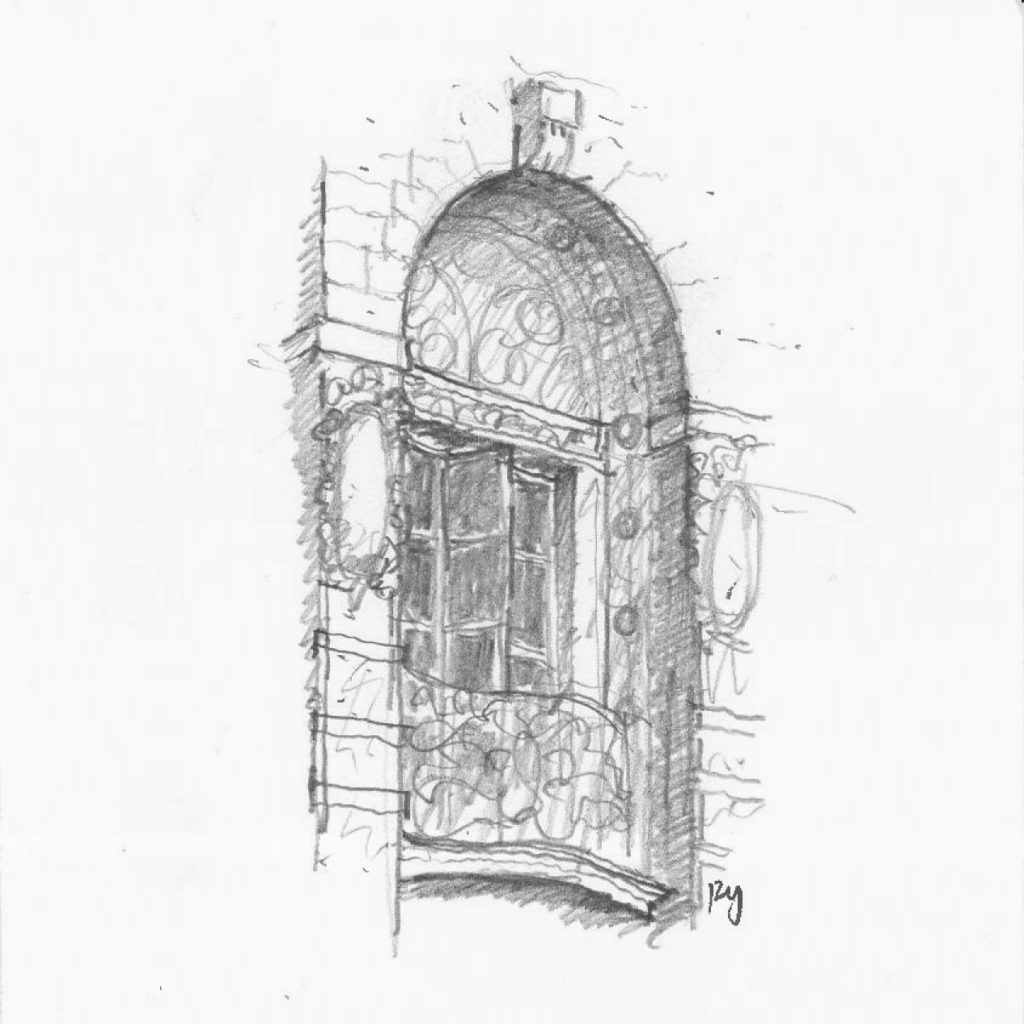 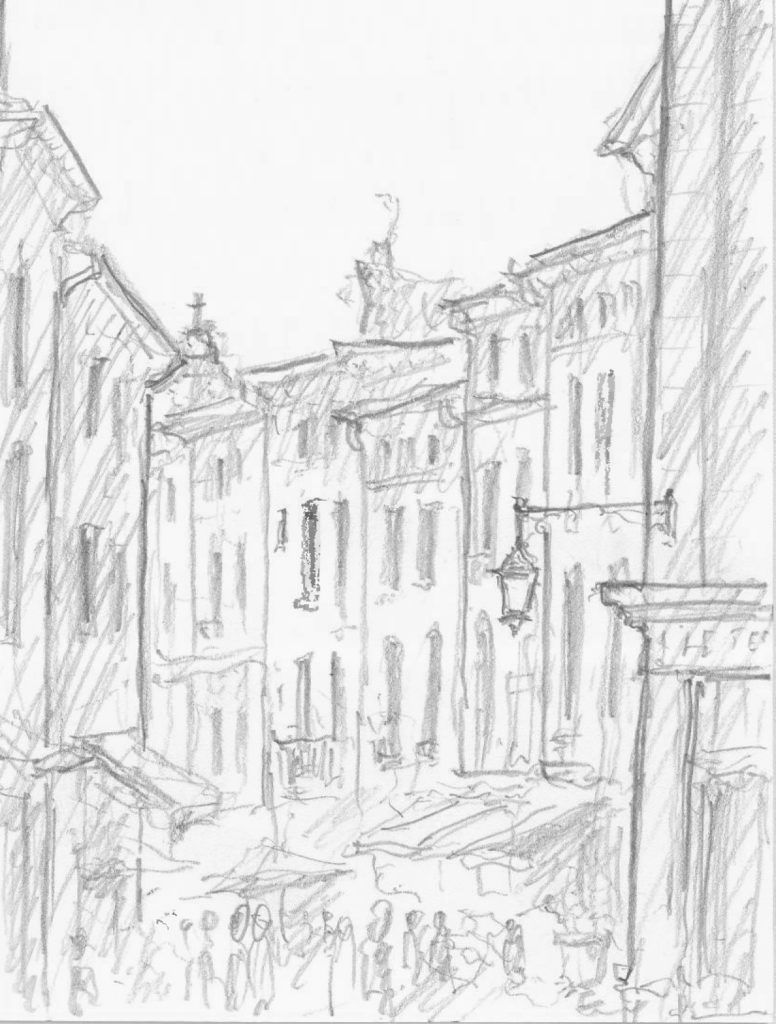