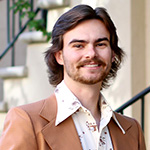 Traveling with family to Jekyll Island, off the coast of Brunswick, Georgia, Evan Markley spent the Christmas holiday exploring a variety of late 19th and early 20th century vacation homes and other buildings from the island’s golden age as a winter retreat for the well-to-do. 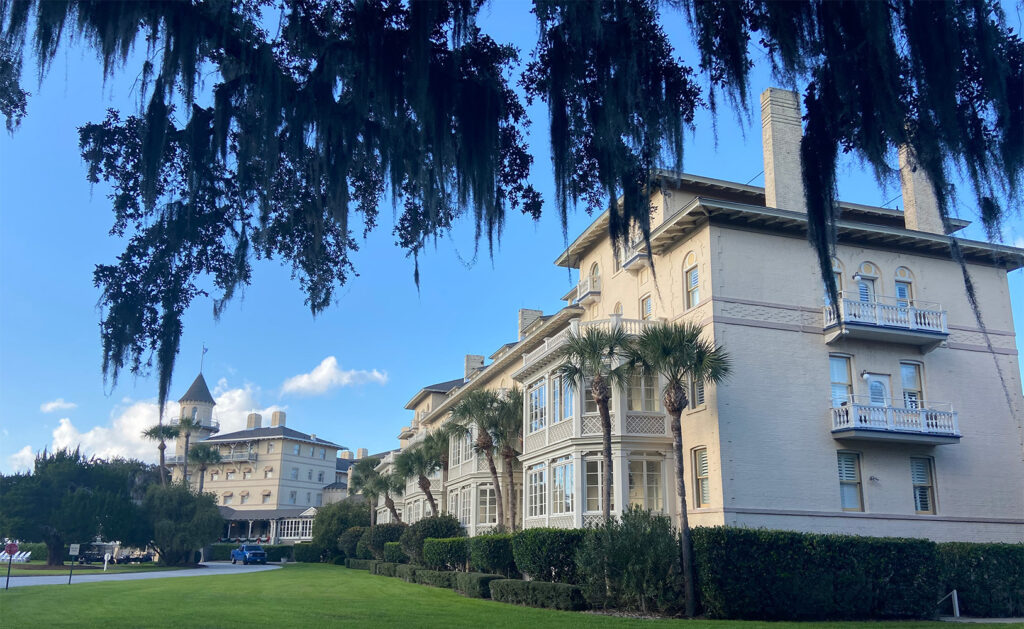 The Jekyll Island Club House, built in 1888 and now known as the Jekyll Island Club Hotel, sits at the center of the Historic District on the west side of the island, overlooking the East River and the surrounding marshlands. The Club House Annex (right) was added in 1901 to the original turreted clubhouse (left) and while each features its own architectural details, the two wings blend together with a consistent use of materials and color palette. 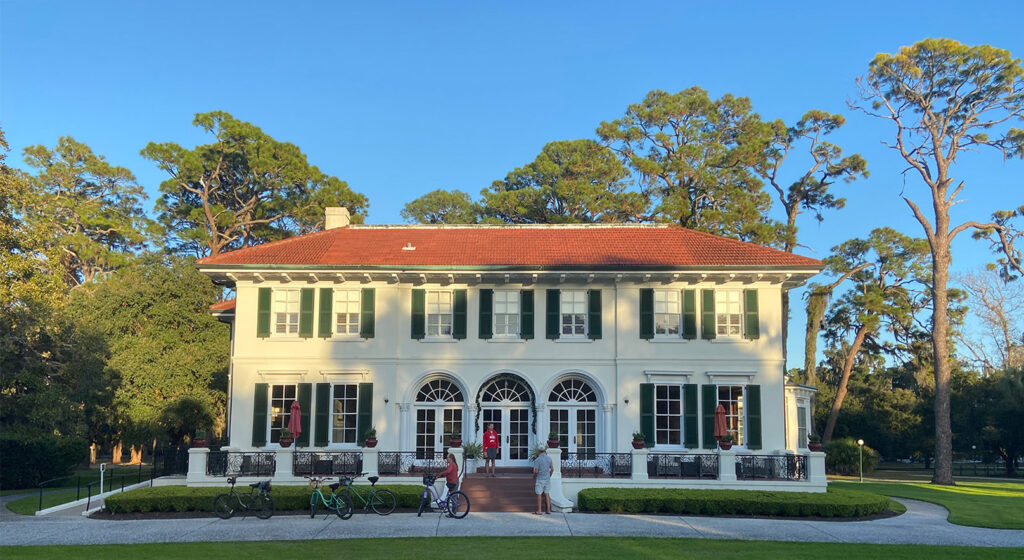 The Jekyll Island Club drew notable businessmen and politicians including Marshall Field, John Pierpont Morgan, Joseph Pulitzer, and William K. Vanderbilt, who were all original members in 1888. Many members decided to build individual vacation homes on the grounds near the Club House, most of which can be visited today. Cherokee Cottage was designed by famed New York architecture firm Carrère & Hastings and built in 1904. 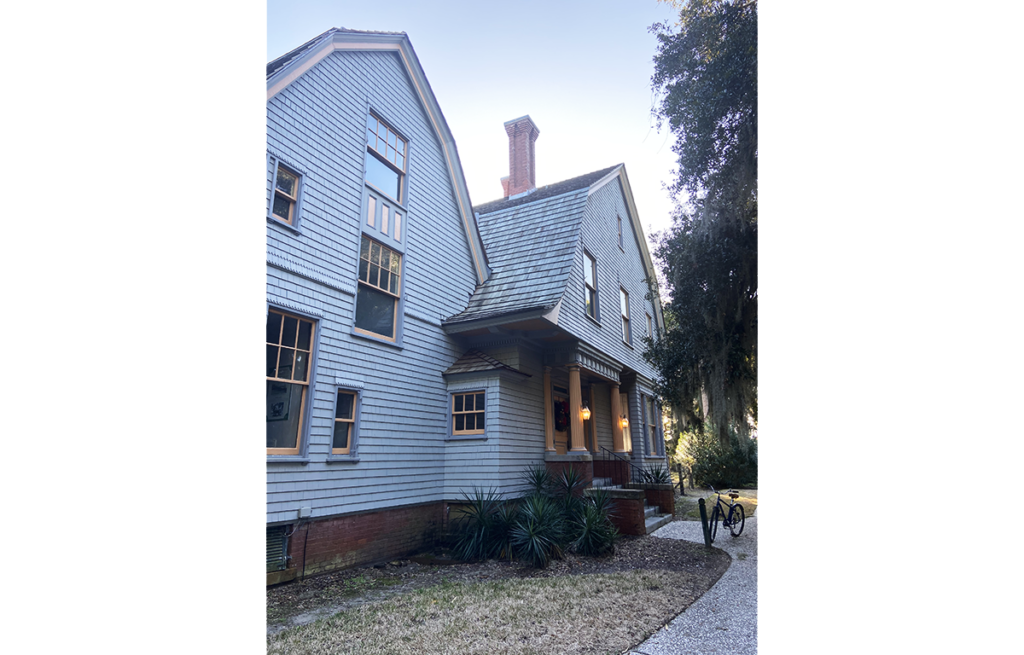 Mistletoe Cottage, completed in 1900, stood out with its pairing of jutting eaves and gambrel roofs with a highly detailed Doric entry portico. 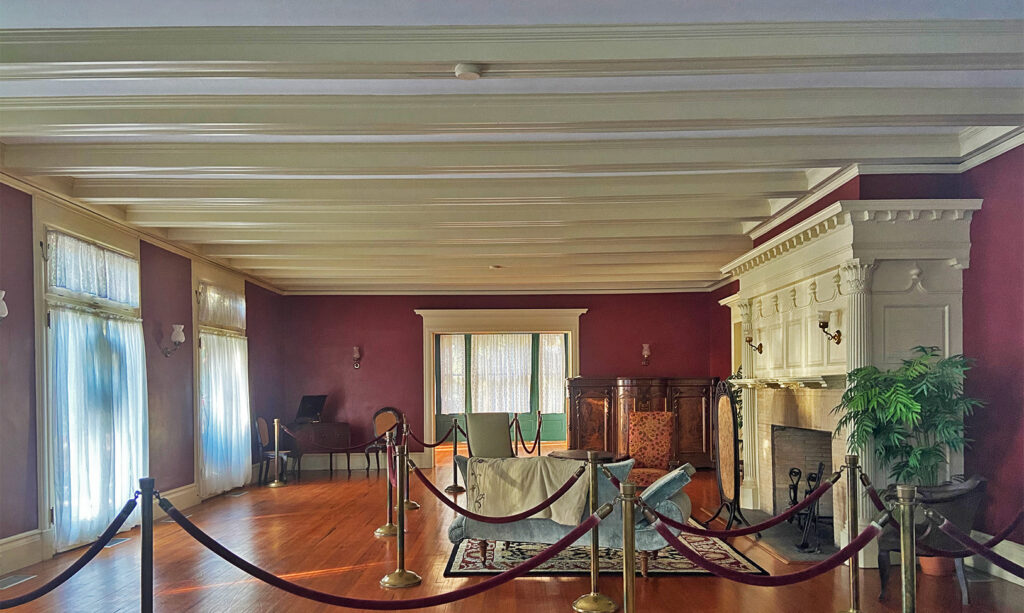 The strong contrast between the cranberry and white in the Mistletoe Cottage living room brought a richness that was unexpected from the soft greys and yellows of the exterior. 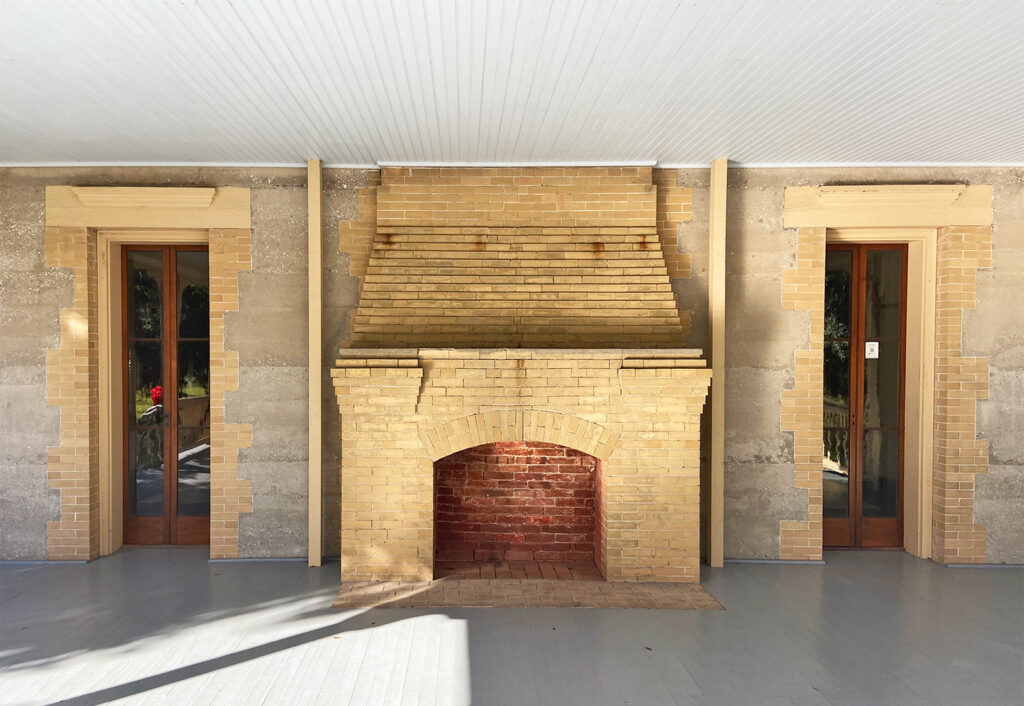 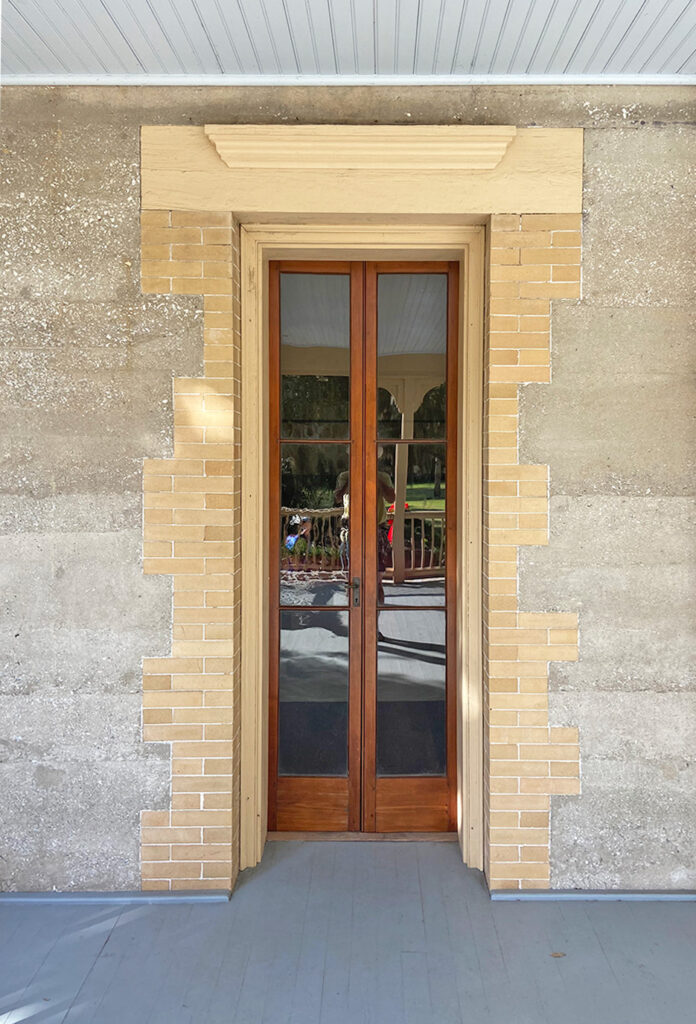 The Hollybourne Cottage was one of the few buildings in the Historic District built primarily of tabby. Tabby is a type of concrete made with oyster shells and sand which was commonly used by Spanish and then British settlers of the region. We saw tabby used in some of the earlier, colonial-era buildings on Jekyll Island during our visit. 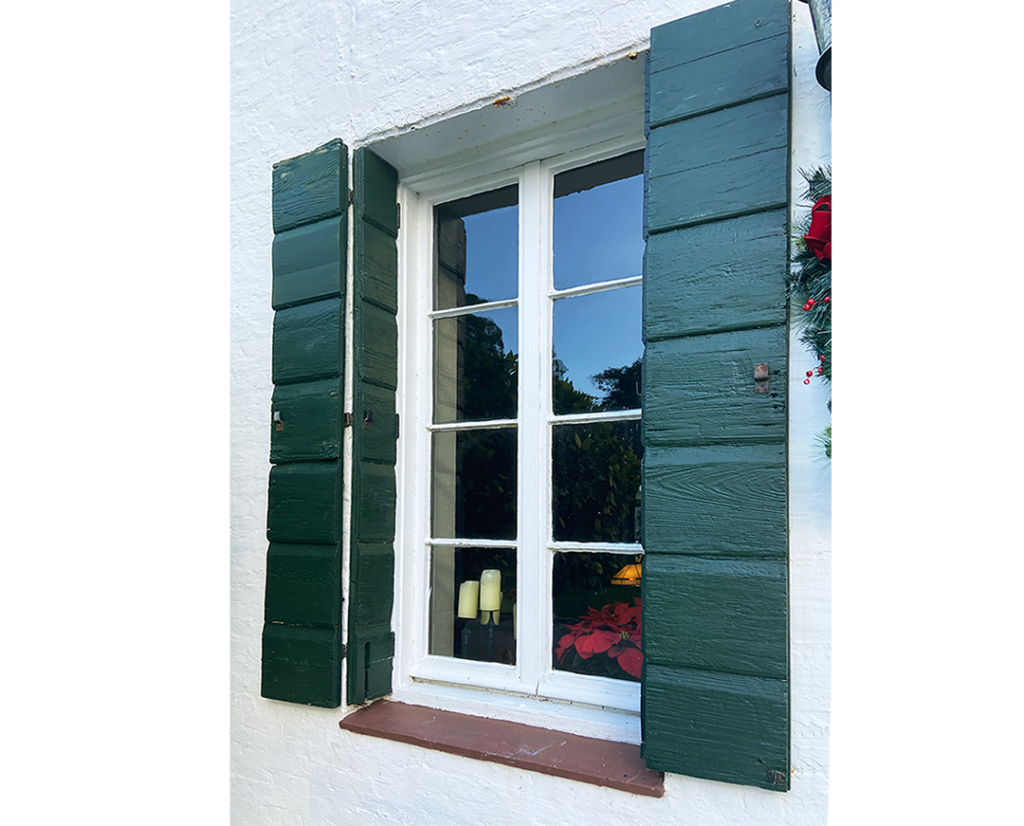 The assortment of cottages in the Historic District came with a variety of fun details and elements that added a special touch to each building. The Crane Cottage, completed in 1918, used an interesting bi-fold shutter to accommodate the deep window openings in its exterior walls. 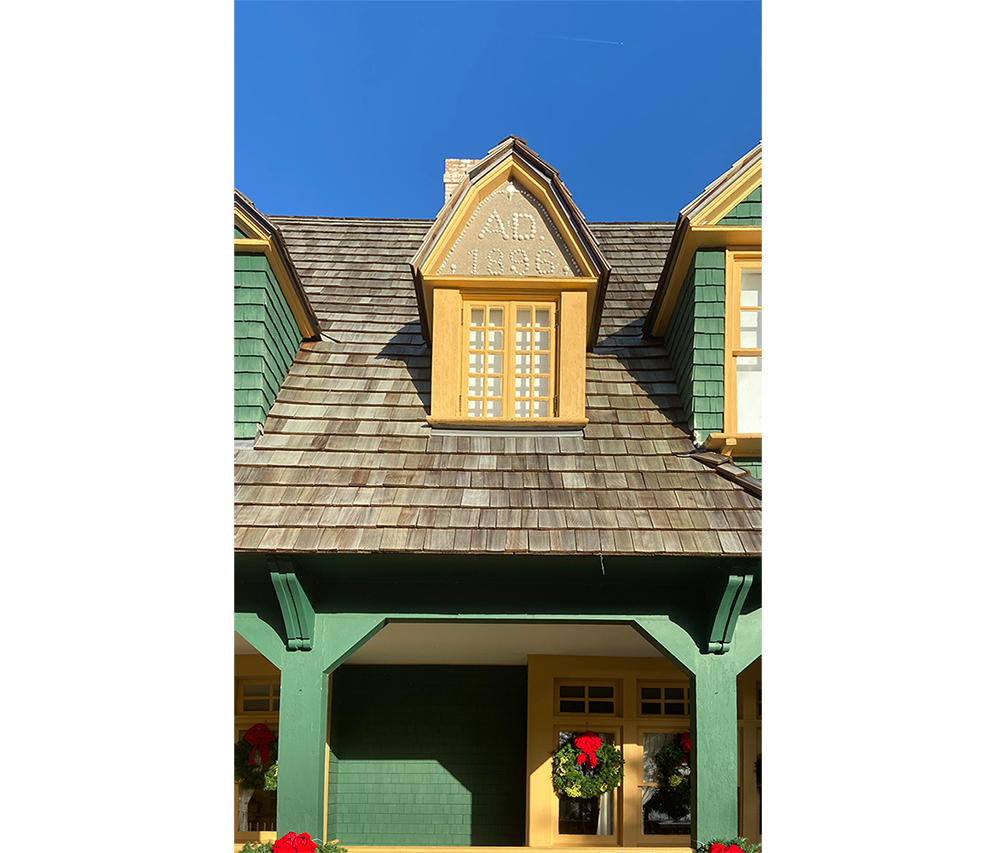 A fun detail was also spotted at the Moss Cottage, built 1896, where sand and seashells were used on the face of a dormer to note the year that the home was completed. 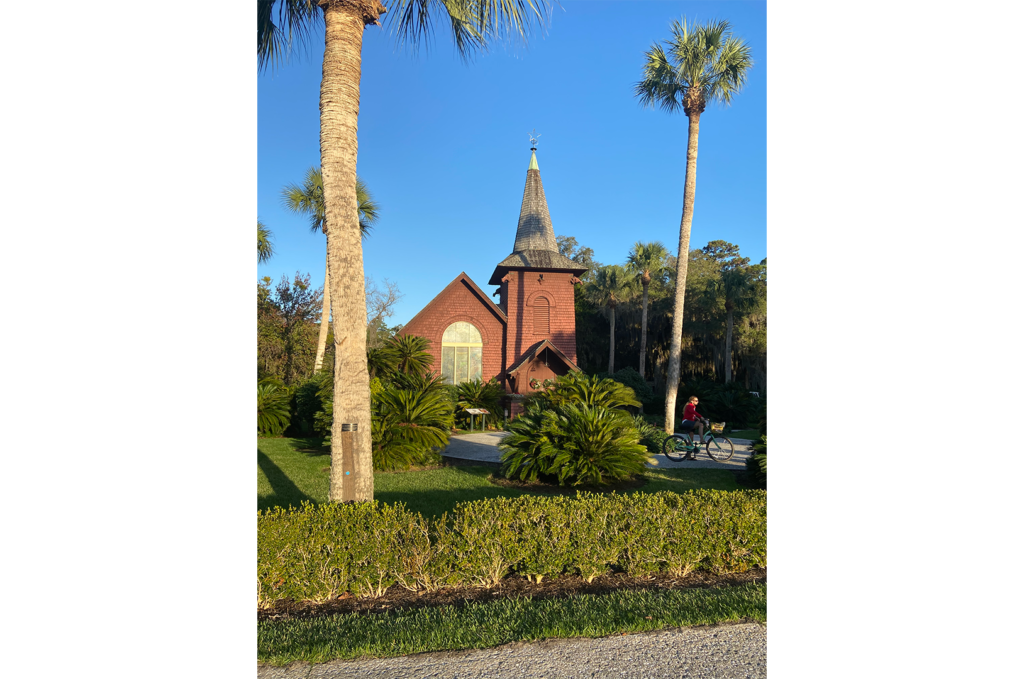 The Historic District was not only home to the Club House and various cottages, but also to several other types of buildings, including Faith Chapel, built in 1904 and renovated in 1970. The chapel featured a large stained-glass window by Louis Comfort Tiffany and terracotta gargoyles based on those of Notre-Dame de Paris. 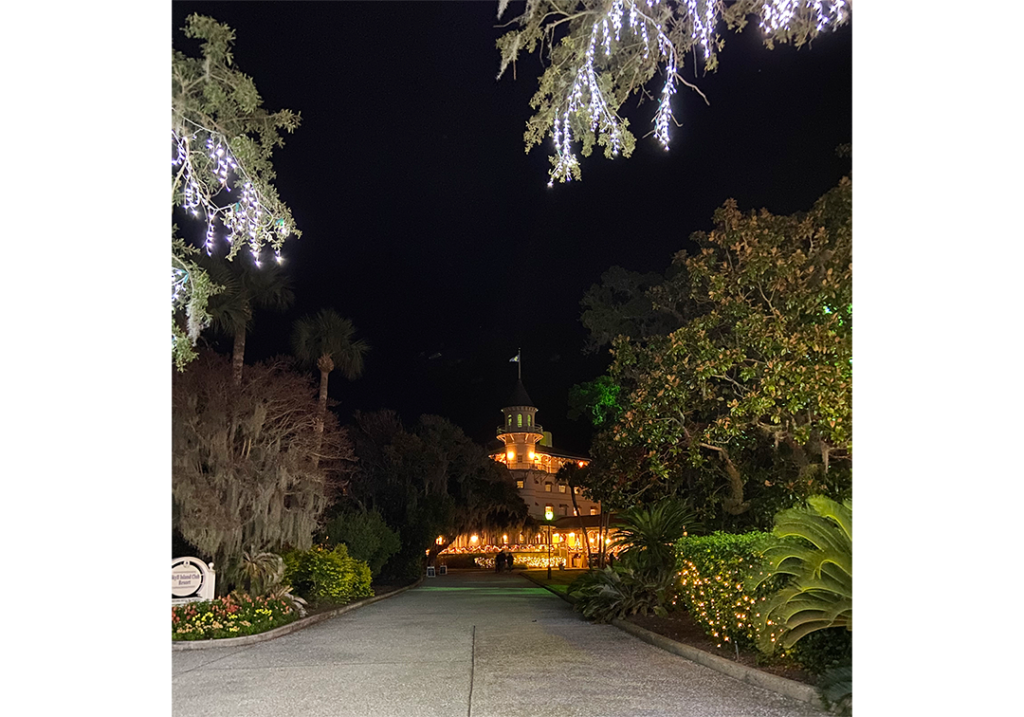 Getting to visit the amazing and unique buildings on Jekyll Island was a sweet treat for the holiday season and had me imagining what it must have been like for the Gilded Age patrons to leave behind the cold northern winters for this warm Georgia retreat. If you’re ever travelling on the Georgia coast or need a place to get away from the cold yourself, a stop on Jekyll Island is a must!