An apartment search led Matt Schaefer to the Fairlie-Poplar Historic District in Atlanta, Georgia. He liked the area so much, he now calls it home and shares some of the sights that drew him to the neighborhood.

When people think of downtown Atlanta, they usually think Centennial Olympic Park, Peachtree Center, GSU, or the Georgia State Capitol Building. However, tucked between all of them is a neighborhood that few people know, despite the fact that it contains the largest group of historic urban buildings in Atlanta. The Fairlie-Poplar Historic District is the area around Woodruff Park and Five Points, and as of last summer, is the neighborhood that I call home. 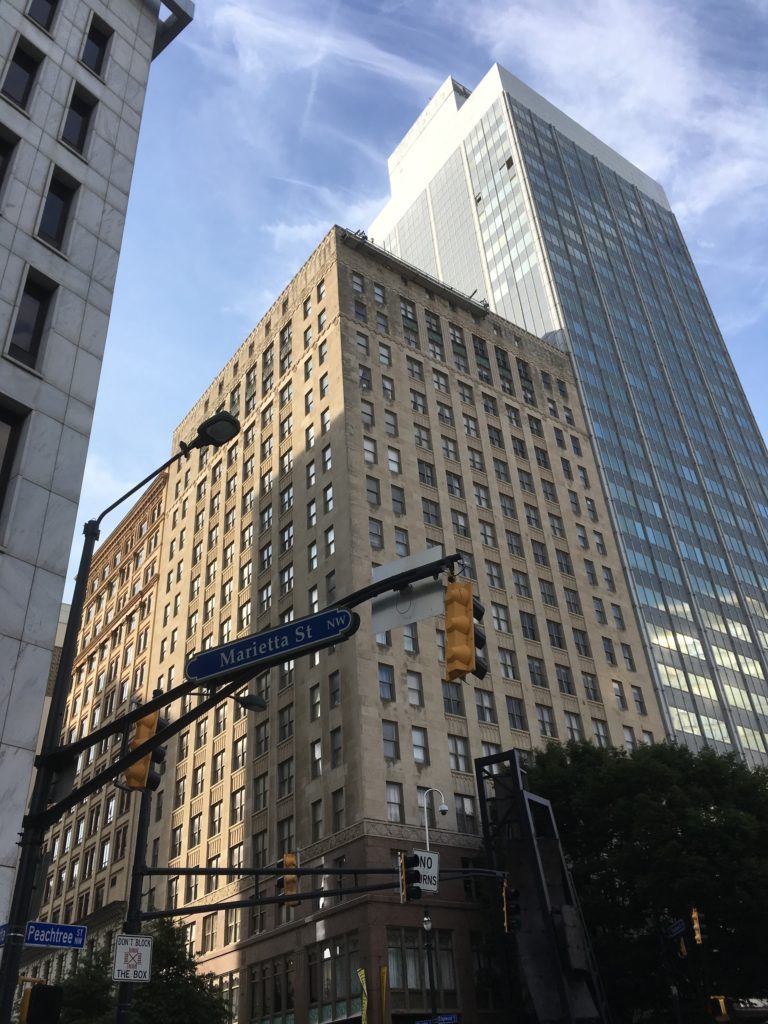 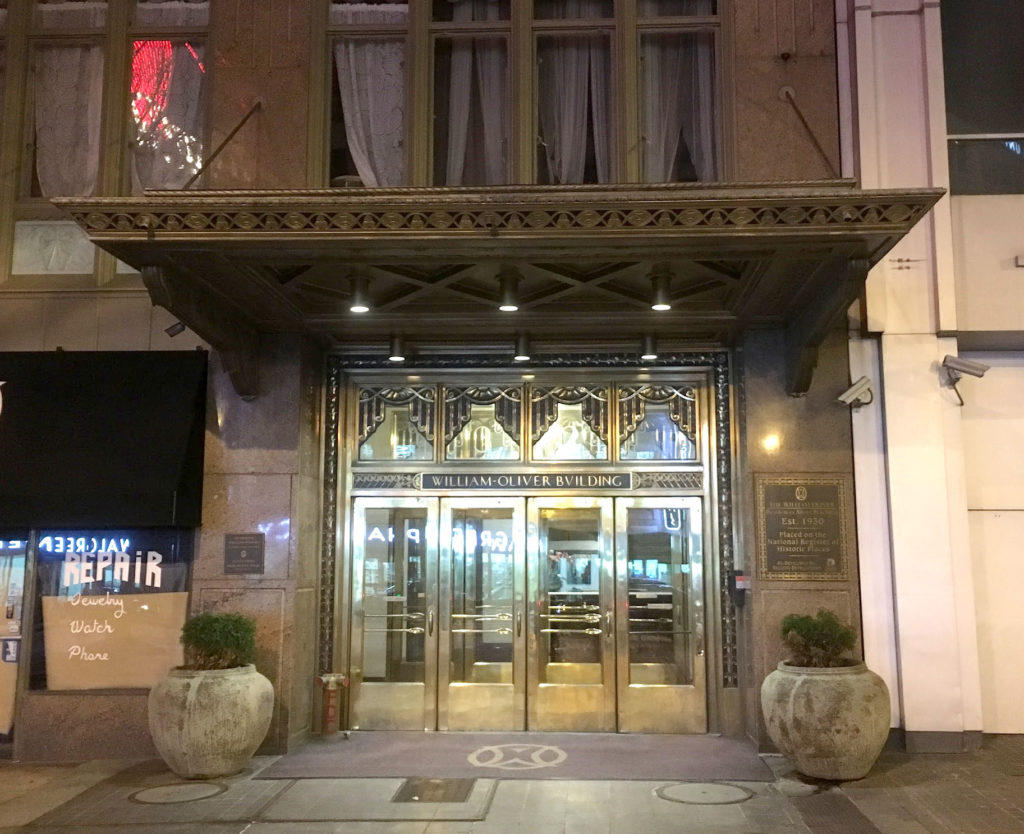 I start my days in the William-Oliver Building – Atlanta’s first Art Deco High Rise – completed in 1930 and designed by Francis Palmer Smith. During his career, Smith was Philp Shutze’s professor at Georgia Tech and designed a versatile range of building types and styles. The William-Oliver features many intricate brass details throughout its interiors and beautiful terracotta panels on its façade. 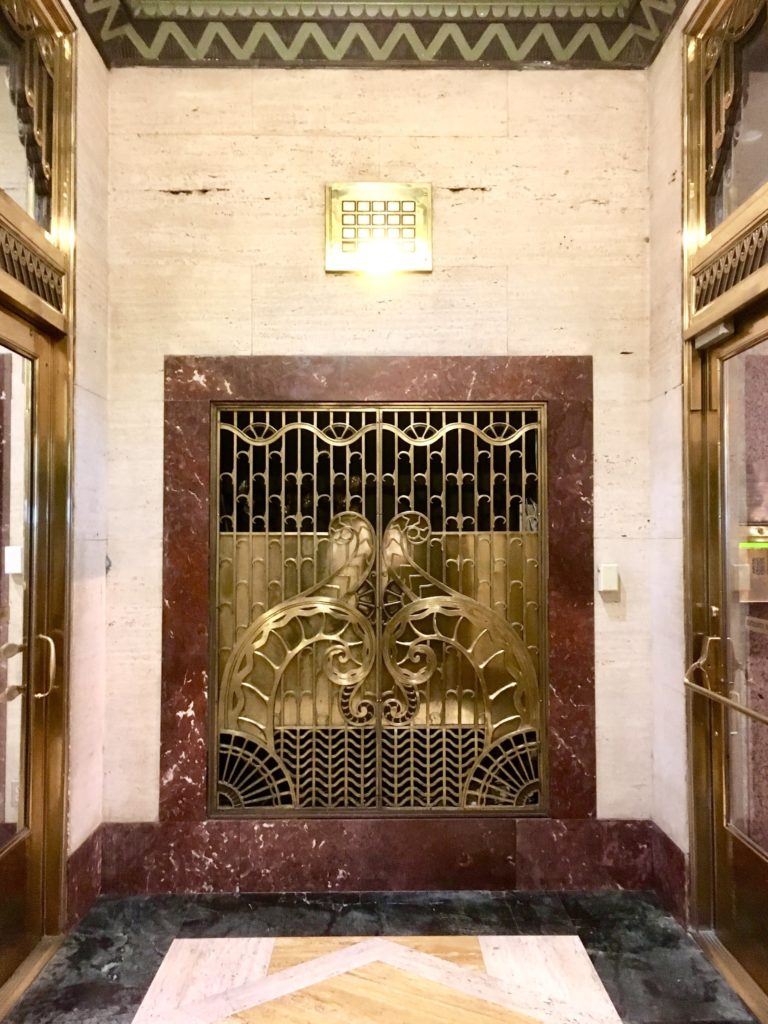 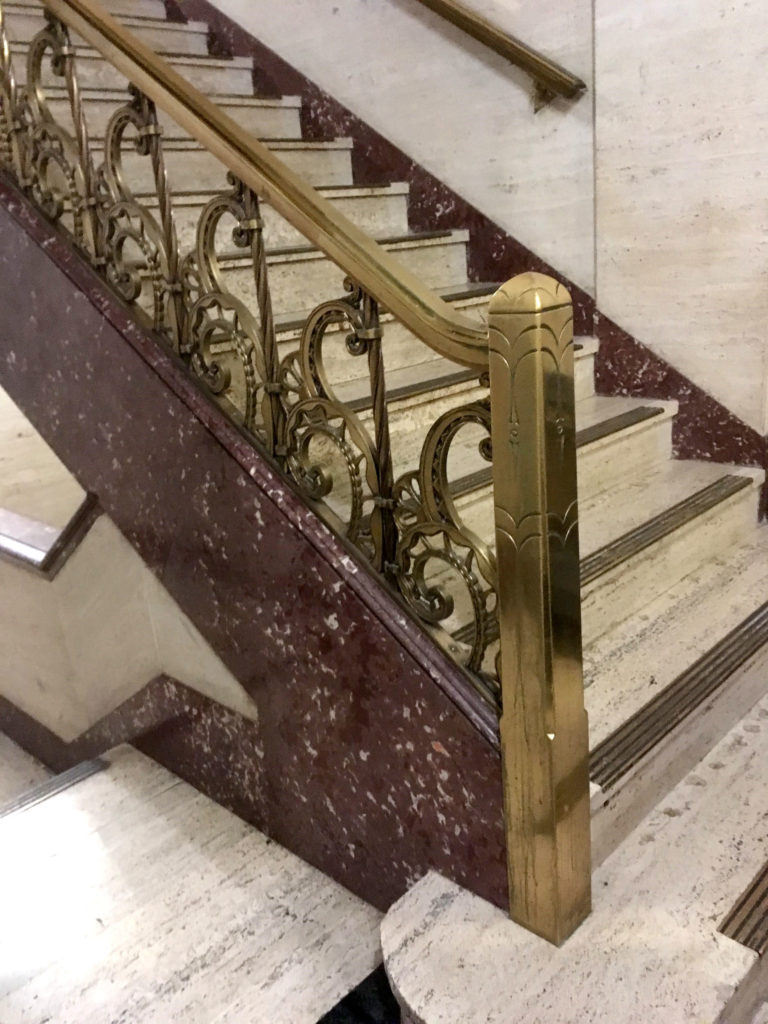 The William-Oliver sits on the southern corner of Woodruff Park and down the street from the Flatiron Building, which, at 11 stories, became the first skyscraper in Atlanta in 1897. 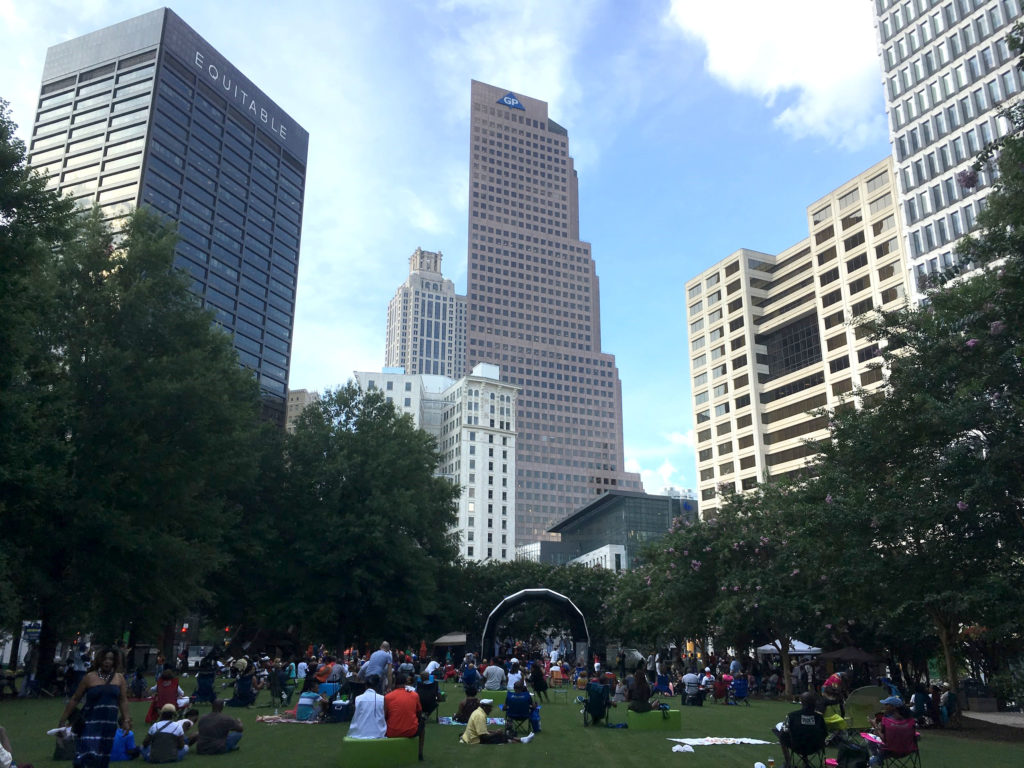 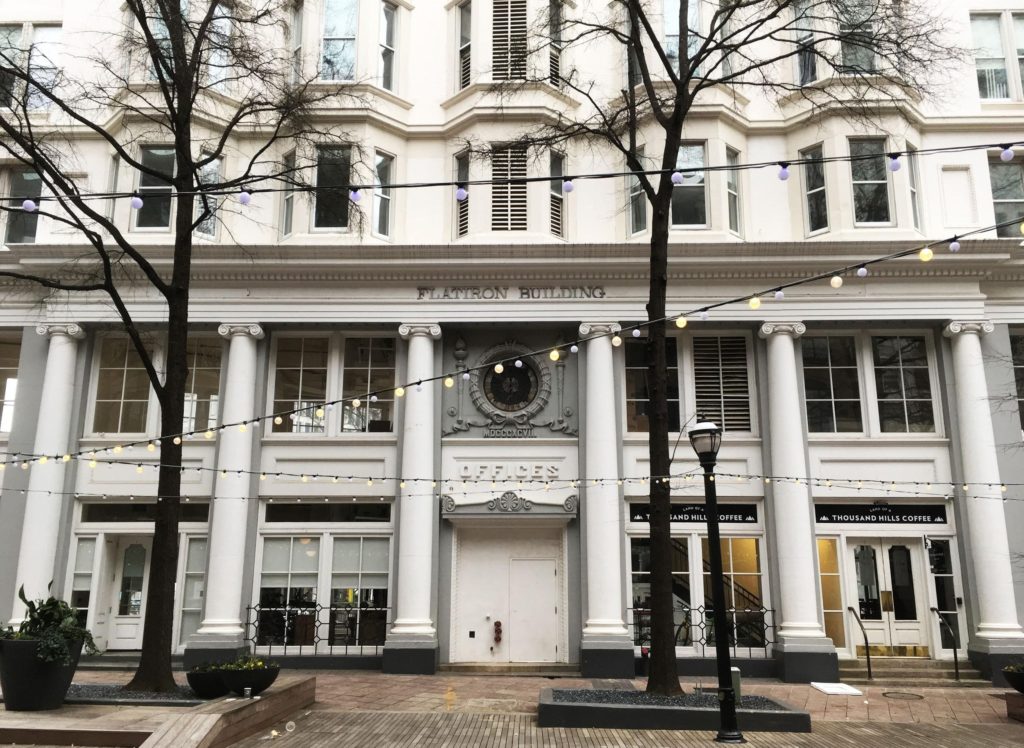 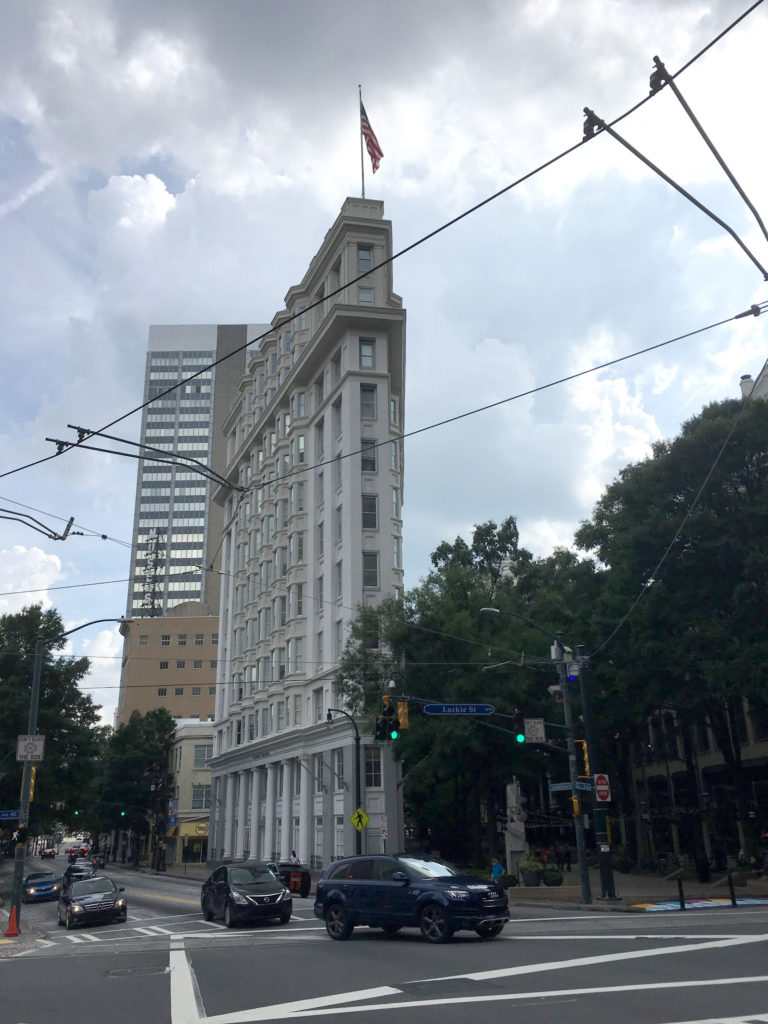 Woodruff Park (left); the Flatiron Building (center) at street level and a view from across the street (right) which reveals its narrow, triangular shape

Behind the Flatiron is Broad Street, which is one of the few examples in Atlanta of a pedestrian-only street, if only for a couple blocks. On a nice day, people can be seen eating their lunches and playing cards in the reclaimed public space. 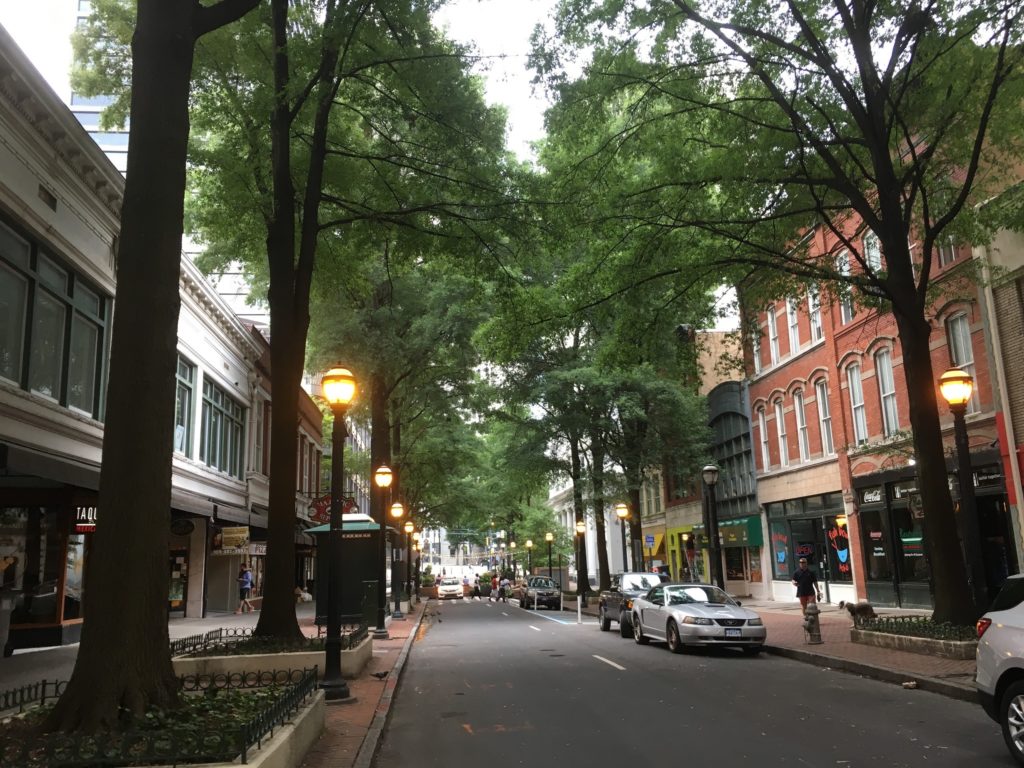 This section of Broad Street leads to a pedestrian plaza, inviting people to linger and enjoy the urban surroundings

At the north end of Woodruff Park is the Candler building, which was where Hentz, Reid & Adler’s office was during Neel Reid’s career. The building features highly sculptural stone details throughout its façade. Currently under renovation, it will reopen as a hotel in November 2019. 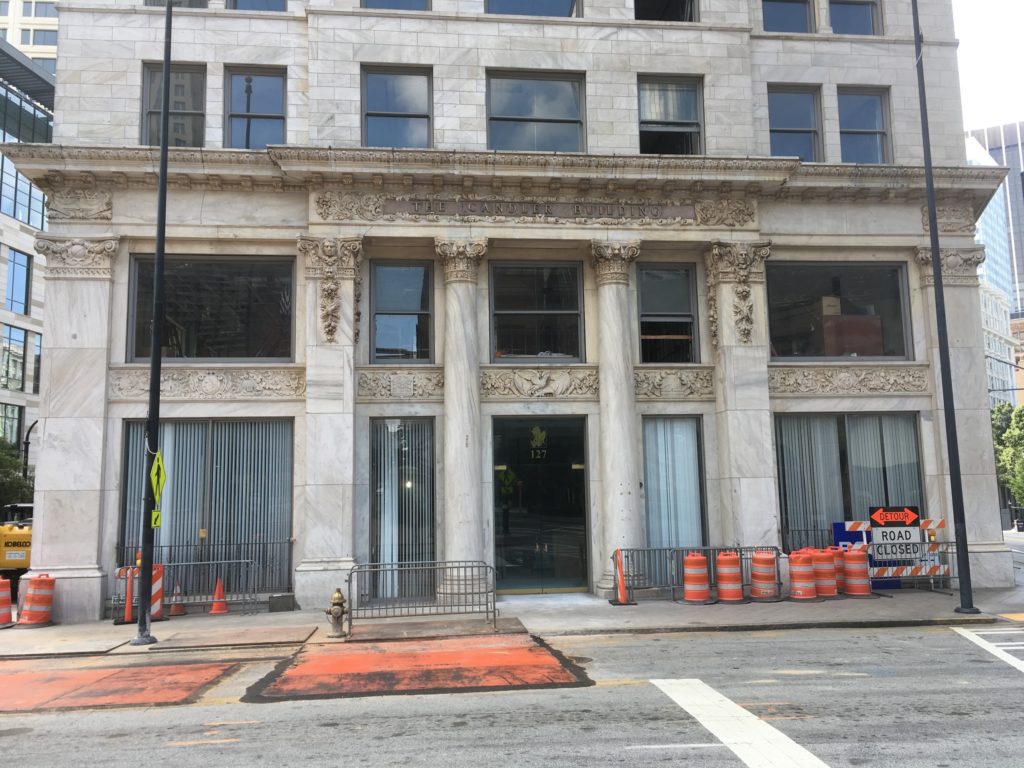 Upon completion of its renovation, the Candler Building (right) will reopen as a boutique hotel; large sculptural details flank the main entrance (left)

The Hurt Building is at the last corner of Woodruff Park. It contains some of Atlanta’s most extravagant interiors in its procession up to the Venetian Room, a ballroom on the building’s second floor. 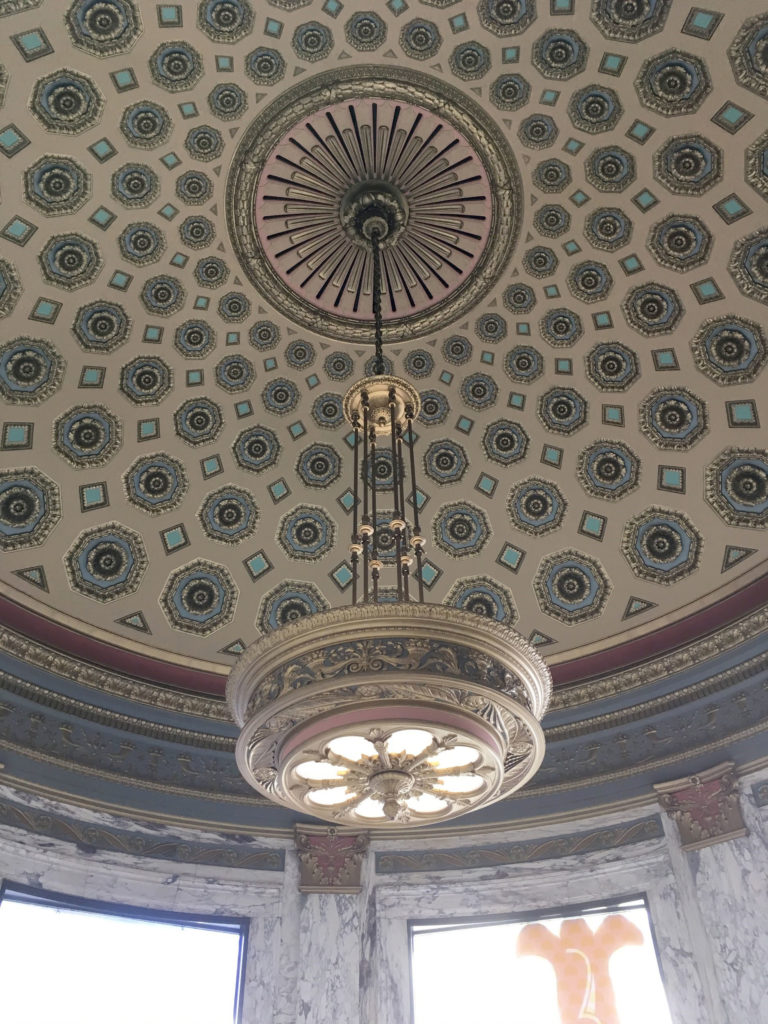 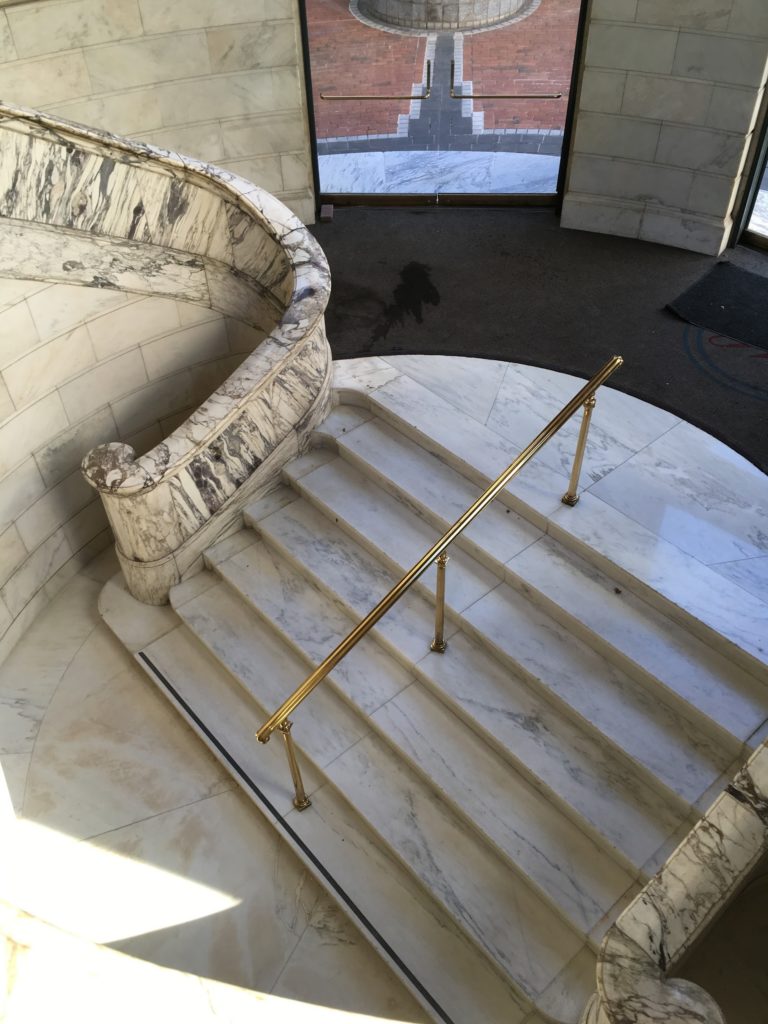 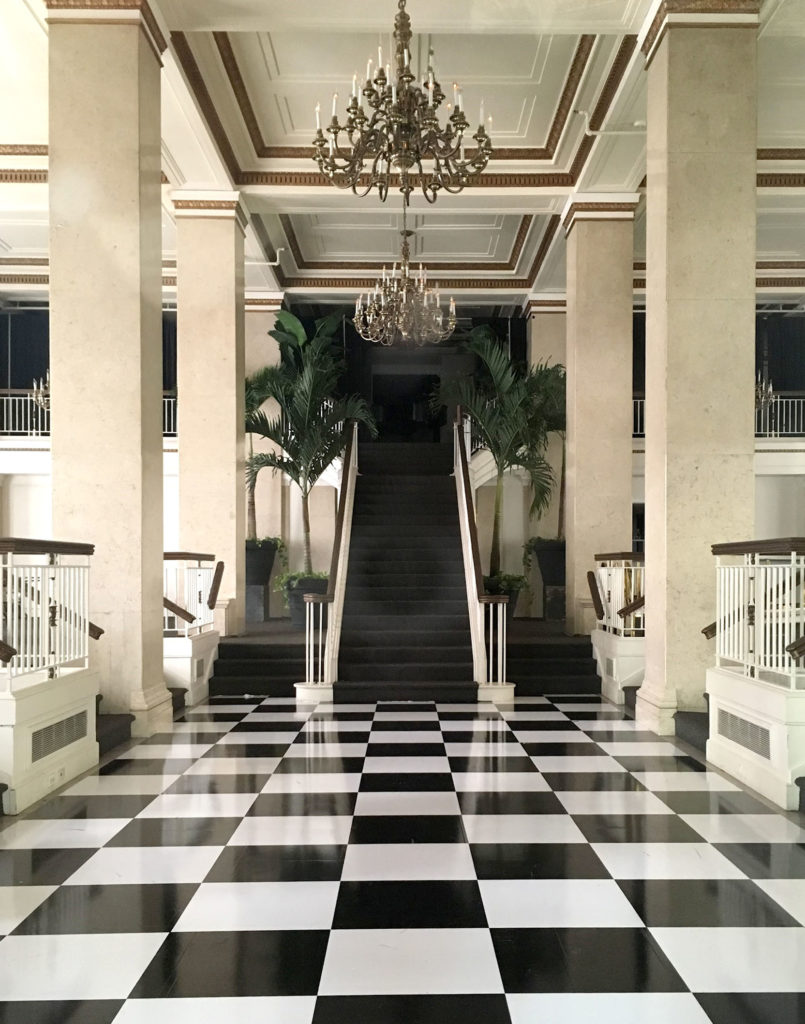 Just south of the Five Points MARTA station are two notable buildings: 45 Broad Street designed by Neel Reid, and the Connally building, designed by William Lee Stoddart. 45 Broad Street was once home to Rich’s, the famous department store based in Atlanta before it merged with Macy’s in 2005. 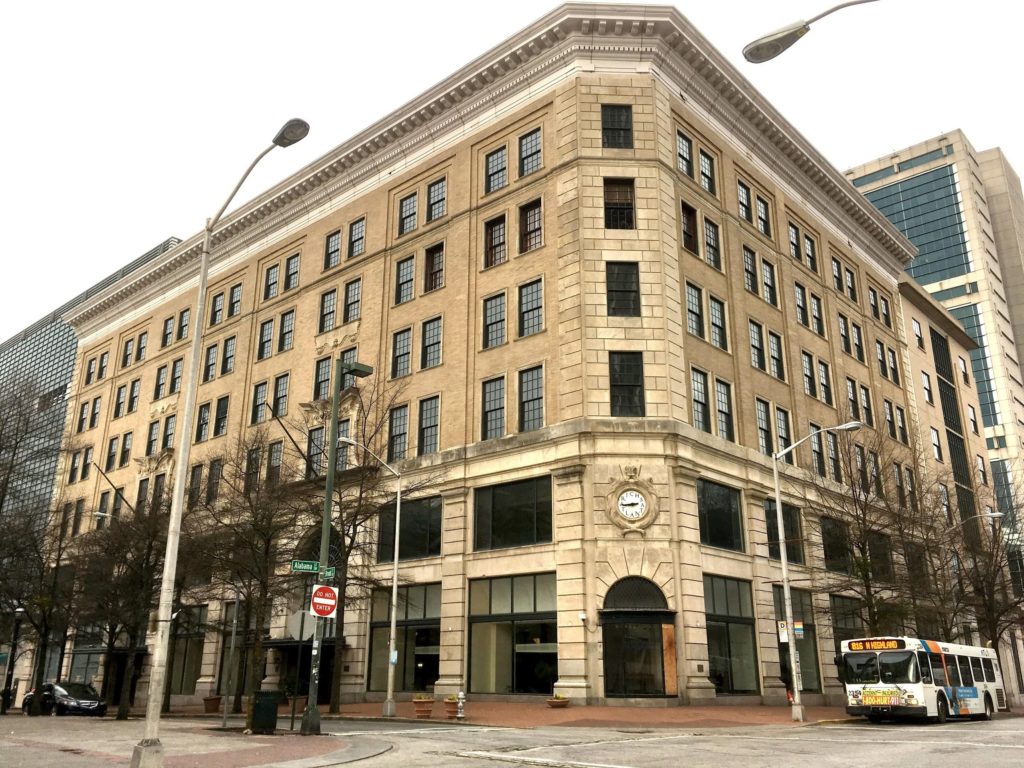 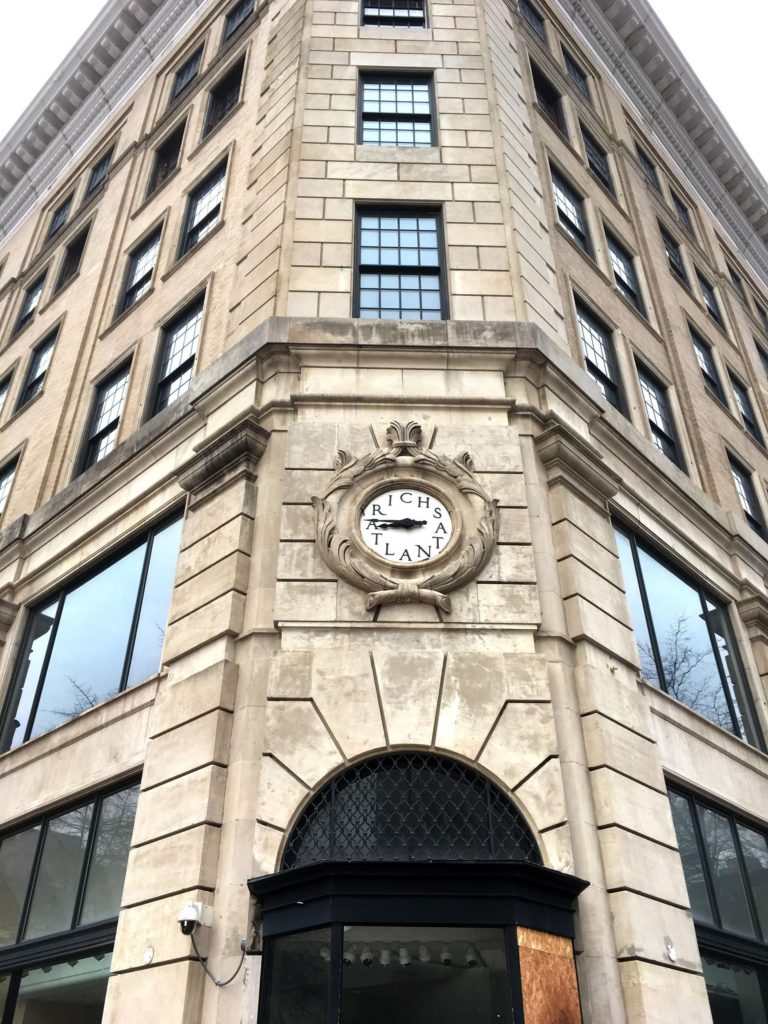 Stoddart’s Connally building was originally a 5-story office building at present-day Underground Atlanta. In 1990, the building was converted to a hotel, which involved adding 11 additional stories. Fortunately, the architectural character of the original façades remained intact. 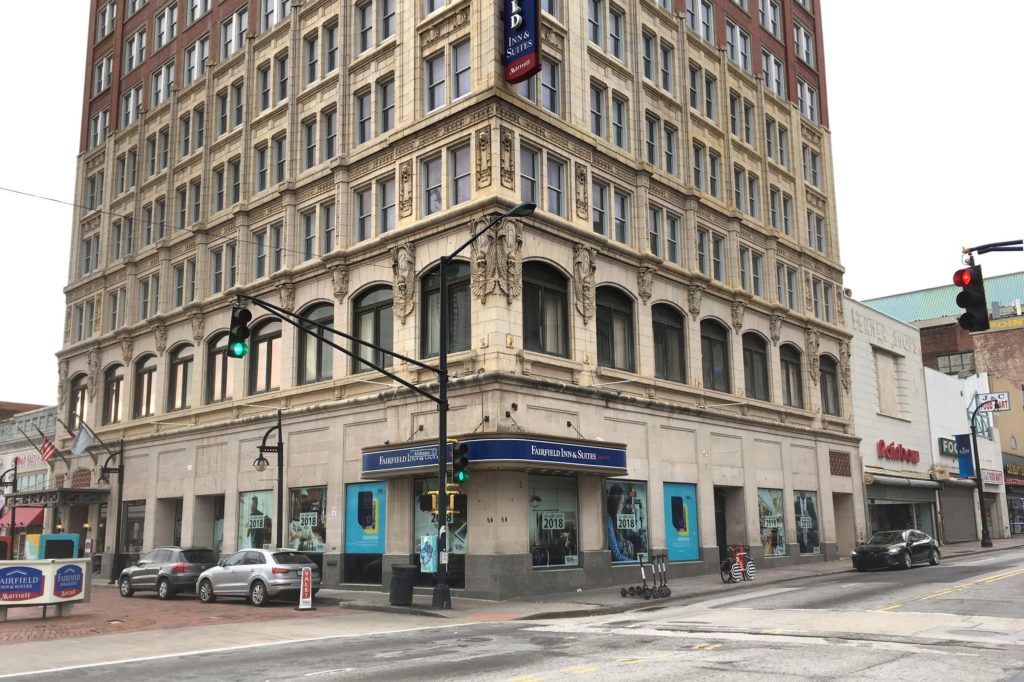 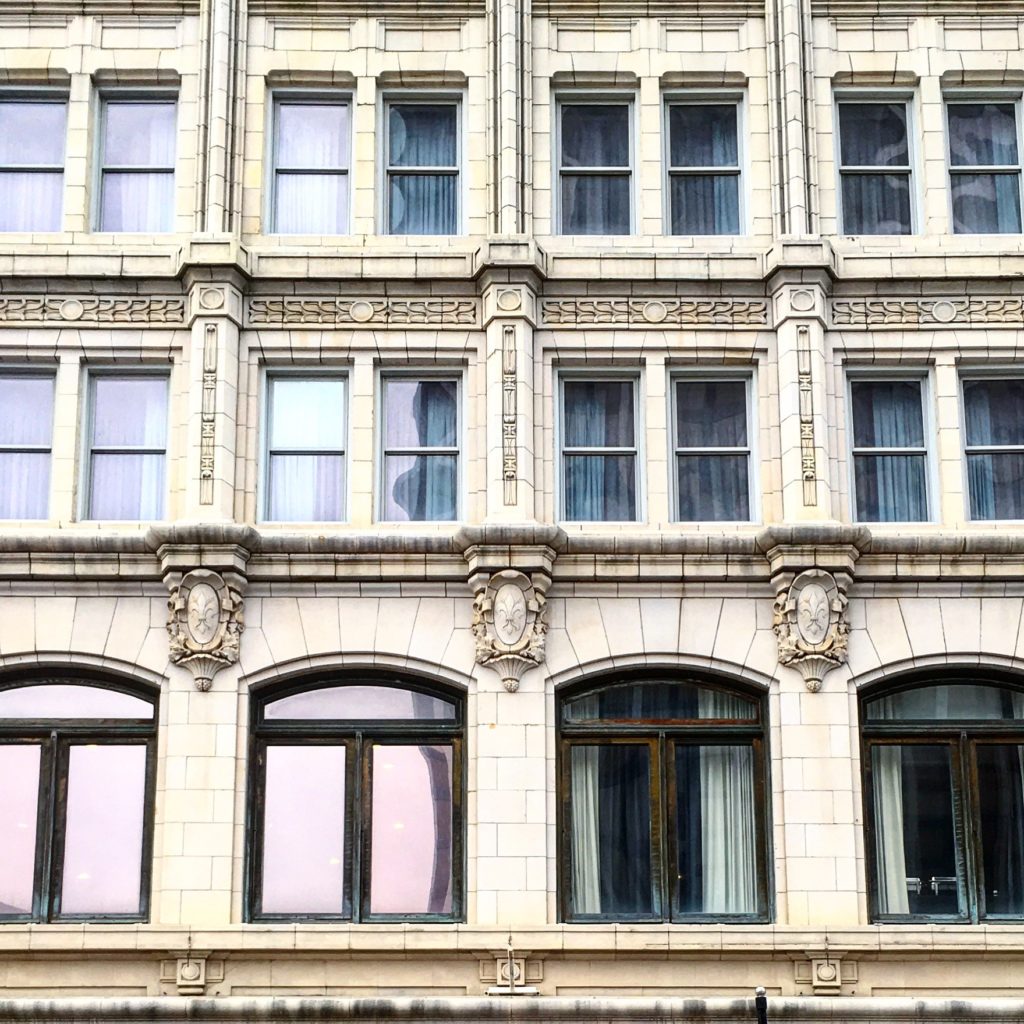 The Connally Building today (left) with its additional brick stories; a closer look at the terracotta details on the original façade (right)

North of Five Points in the heart of the Fairlie Poplar District is the U.S. Court of Appeals, a large Beaux Arts building designed by James Knox Taylor in 1911 to look like a Renaissance Palazzo. 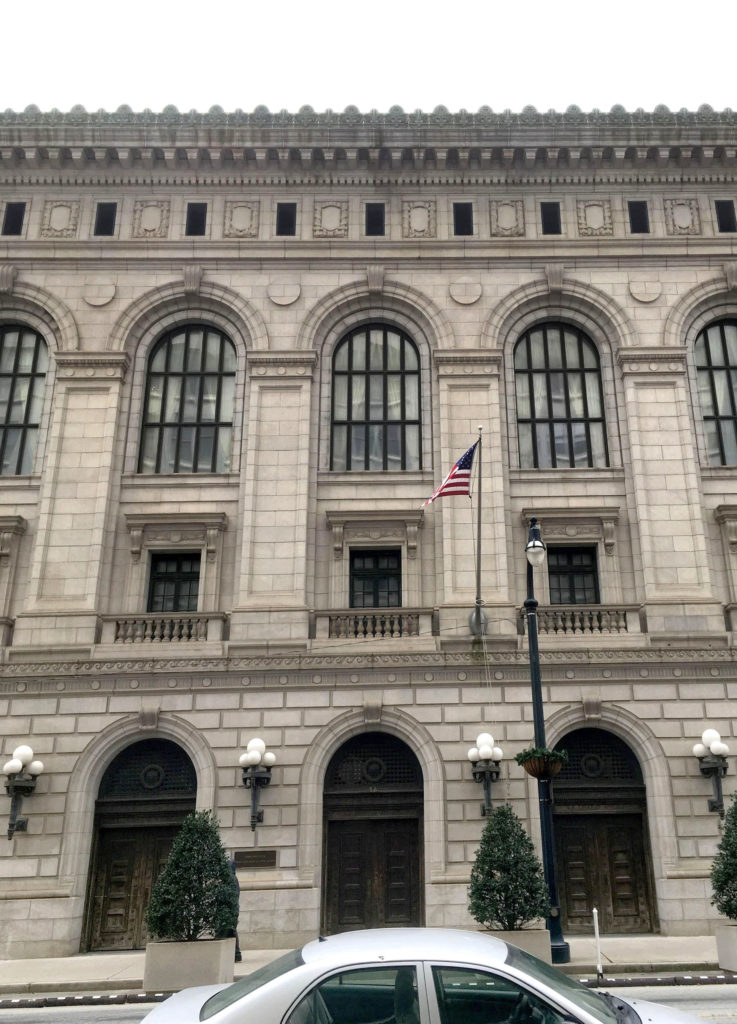 The front of the U.S. Court of Appeals features double-height arched windows (left) while the side has pedimented windows (right)

Across the street is the Healey Building, a 16-story office tower designed by Morgan & Dillon and completed in 1914. It was later converted to condominiums in 2001. 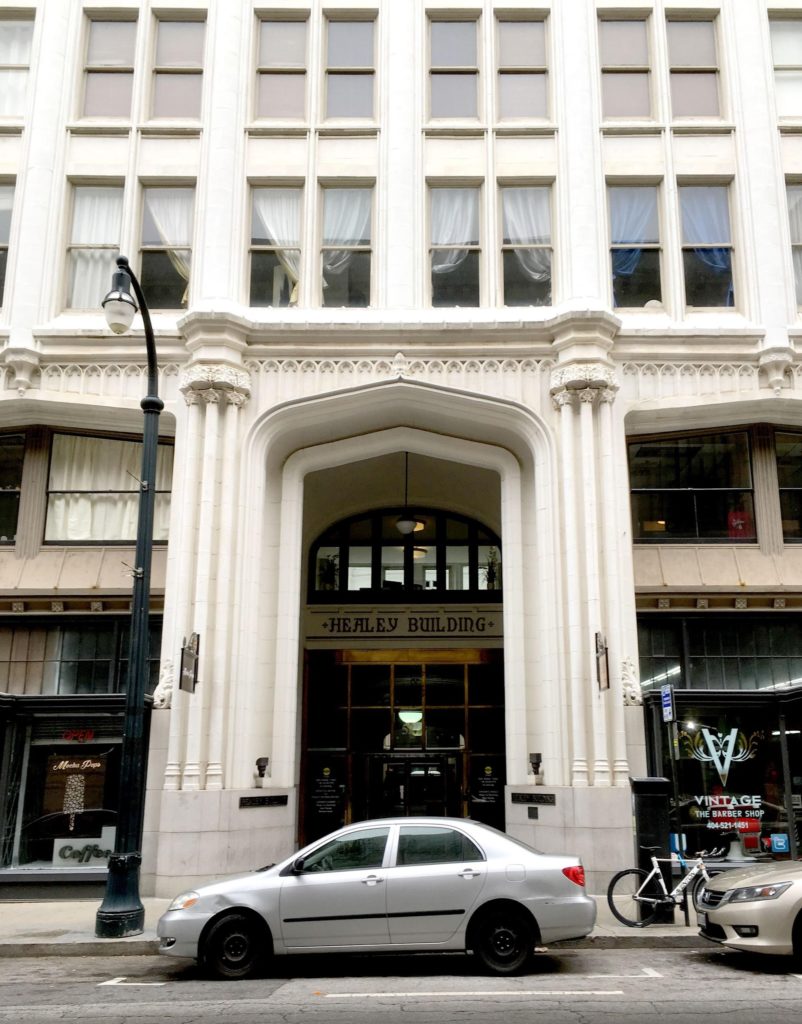 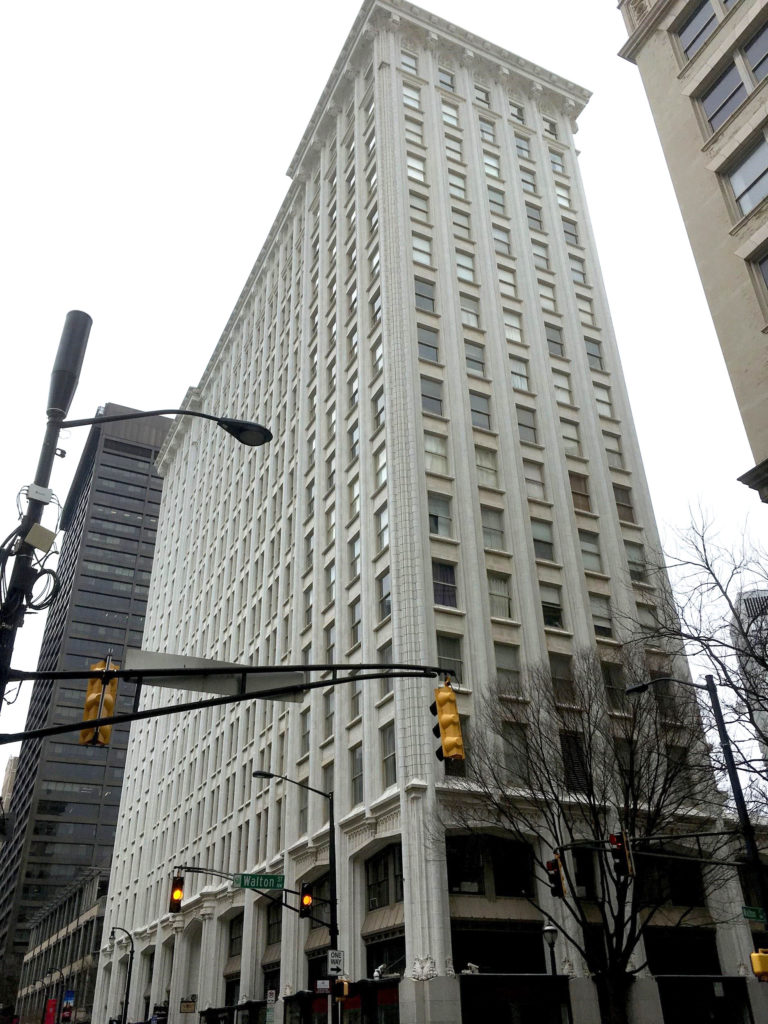 This building is a rare example in Atlanta of Gothic-style architecture. It also has a spectacular atrium which is open to the public during the day. 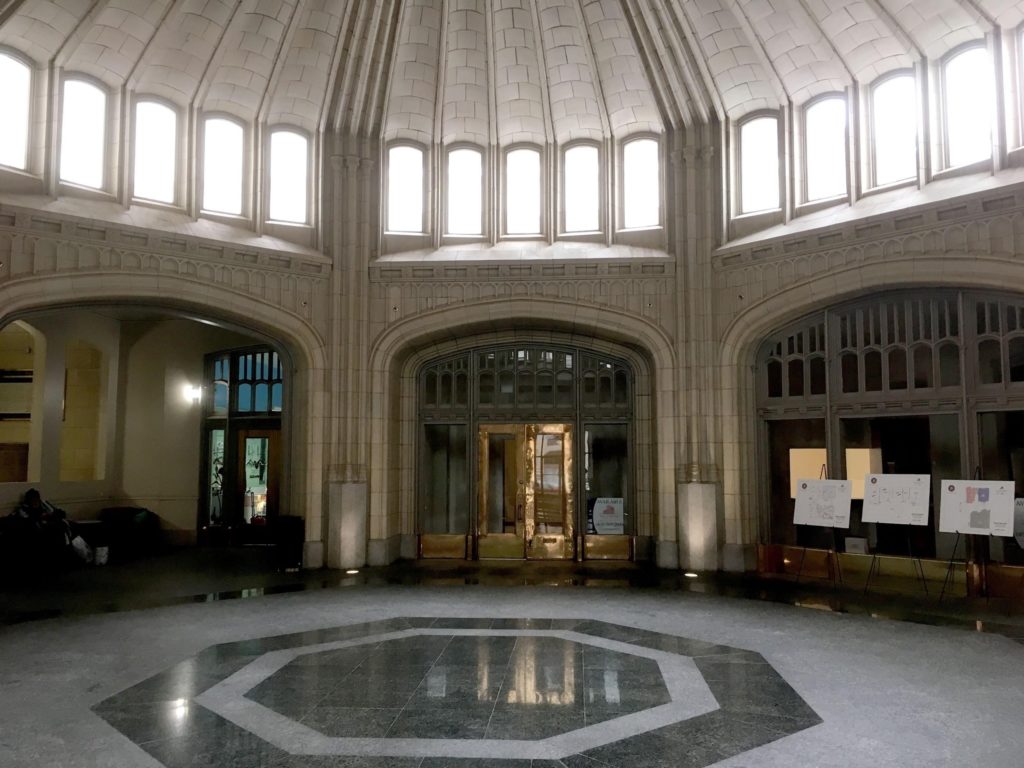 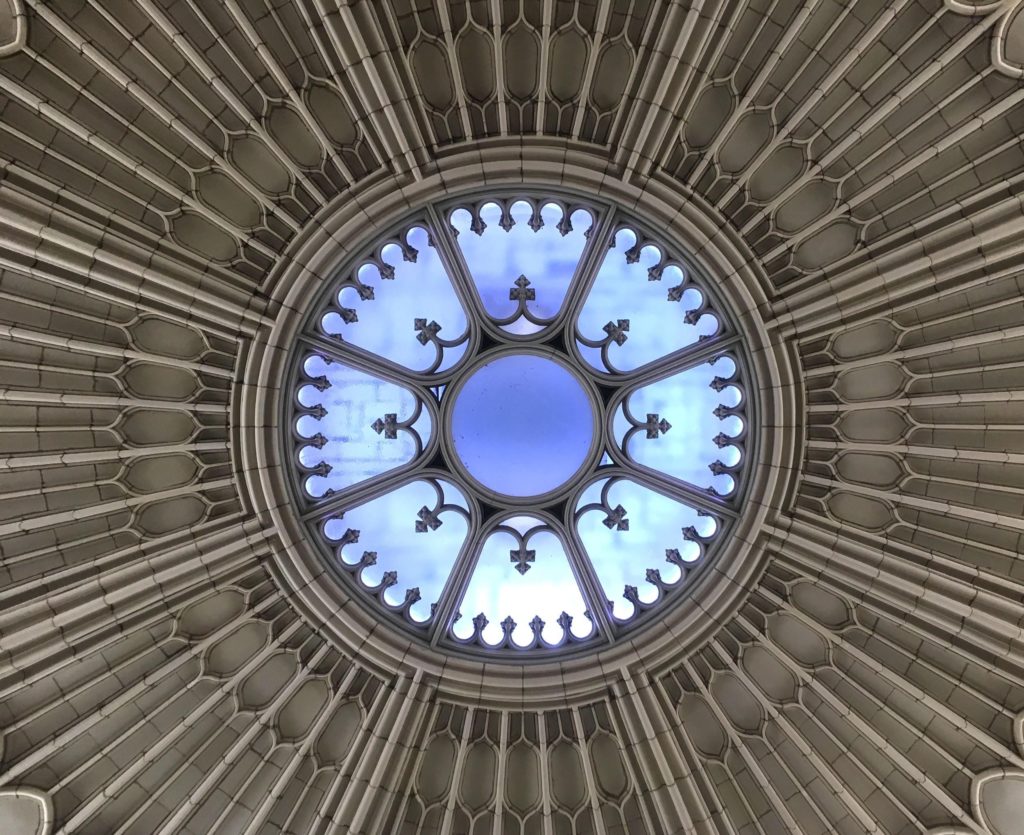 The interior has an ornate, light-filled atrium

These are just a few of the inspiring buildings which have stood the test of time in downtown Atlanta. It is very special to live in a neighborhood so rich in detail and so connected with the history of the city.