THIS 4,300 ACRE SITE IN THE SOUTH CAROLINA LOWCOUNTRY is nestled in an estuary of fresh and saltwater marshes, the rural character preserved, and its natural heritage unspoiled. The Bluff Tract neighbors several former plantations which harvested rice and indigo, including White Hall Plantation and Cherokee Plantation, significant for their re-invention as twentieth century recreational hunting camps. Historical Concepts was hired for this very purpose, to envision a modern day, luxury hunting retreat with a broad array of recreational opportunities to include: hunting (deer, quail, pheasant, dove, turkey, and duck), hiking, horseback riding, ATV and mountain bike trail riding, camping, and bird watching. The client expressly wanted a master plan for the property that would integrate these new elements yet feel as though it had evolved over several generations.

Drawing from the site’s cultural history, Historical Concepts created a master plan that treats the Bluff Tract as two separate, but complementary plantations. The conceptual narrative for Almondbury Hill Plantation (the northern tract) was based on the rice and indigo harvesting era, while the vision for Calfpen Plantation (the southern tract) grew from the turn-of-the-century timber and cattle trades. These distinct stories provided an imagined, yet historically accurate framework to support the different lifestyles and uses envisioned for the two portions of the property: Almondbury Hill would be the family homestead, consisting of the Bluff Tract’s Main House and residential dependencies, while Calfpen would be the sportsman’s realm, a center for hunting and outdoor recreation along with the required support structures. 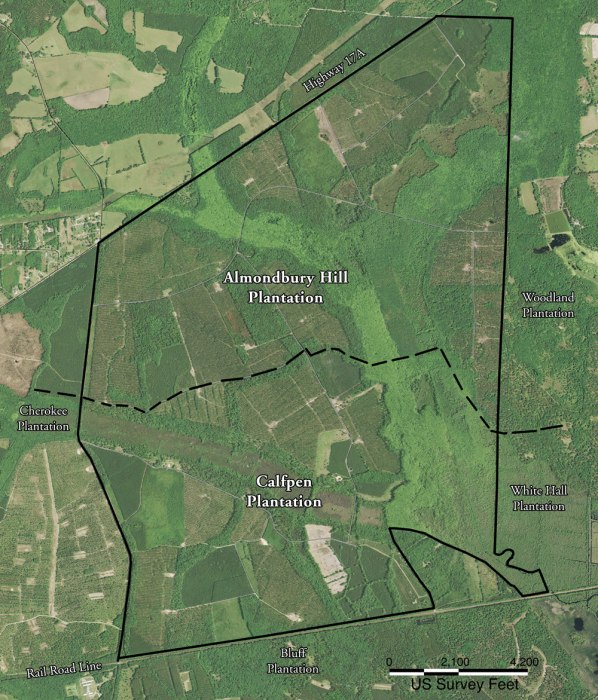 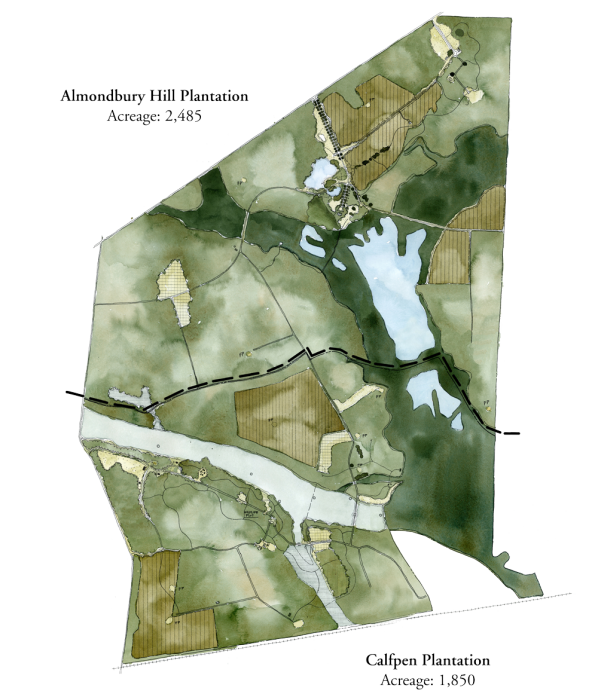 AN AERIAL OF THE SITE shows the existing roads and natural features, as well as the proximity to other historic plantations. These elements informed the master plan and established a historically appropriate context for the future development of the two distinct properties. 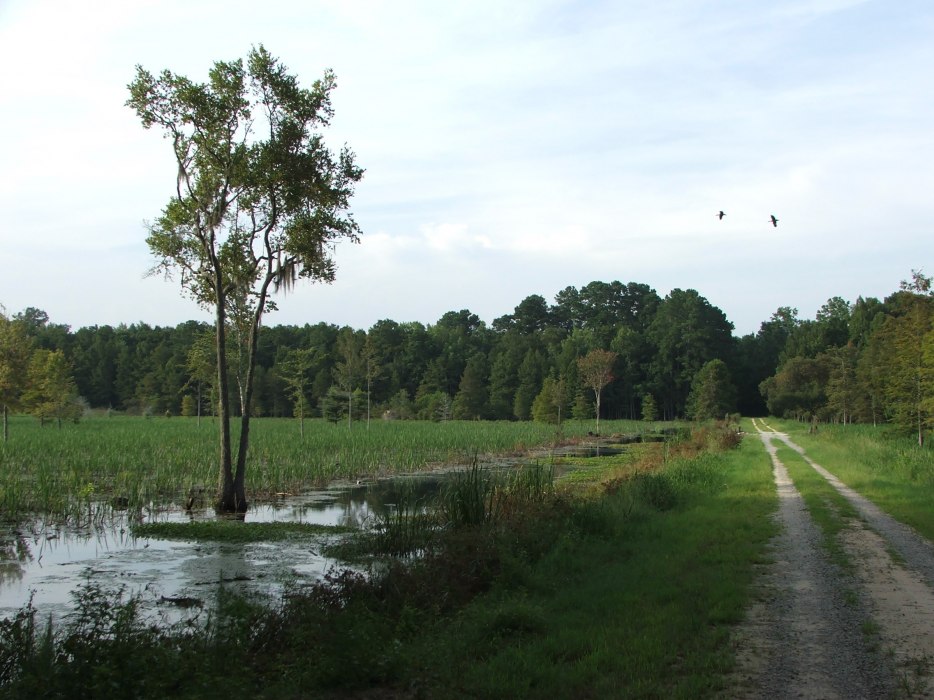 PLANNING FOR THE ALMONDBURY HILL PROPERTY began with careful documentation of the existing natural amenities found on the site. Each environmental experience was carefully considered, with the goal of evoking the distinct character of the setting. Letting the land “speak” provides a true sense of place and authenticity. 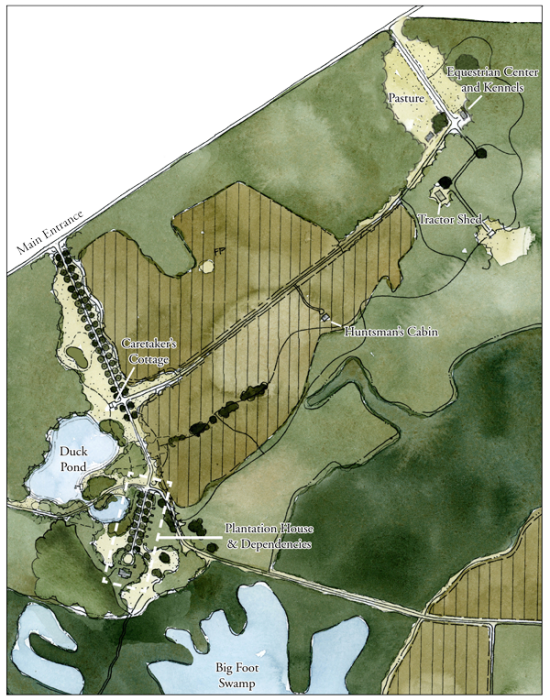 THE PLAN FOR THE ALMONDBURY HILL tract assumed the narrative of a pre-Civil War plantation. The siting of a Main House and dependencies reflected the way of life of the era, as well as the style of architecture that would have been common in the early nineteenth century. Mature Live Oaks were transplanted from various parts of the site to create a “historic” allée framing the entrance drive and progression through the site. Additionally, a duck pond, huntsman’s cabin, equestrian facility, kennels, and a caretaker’s cottage were positioned across the site to take advantage of key natural amenities and dramatic vistas between the buildings and out to nature. 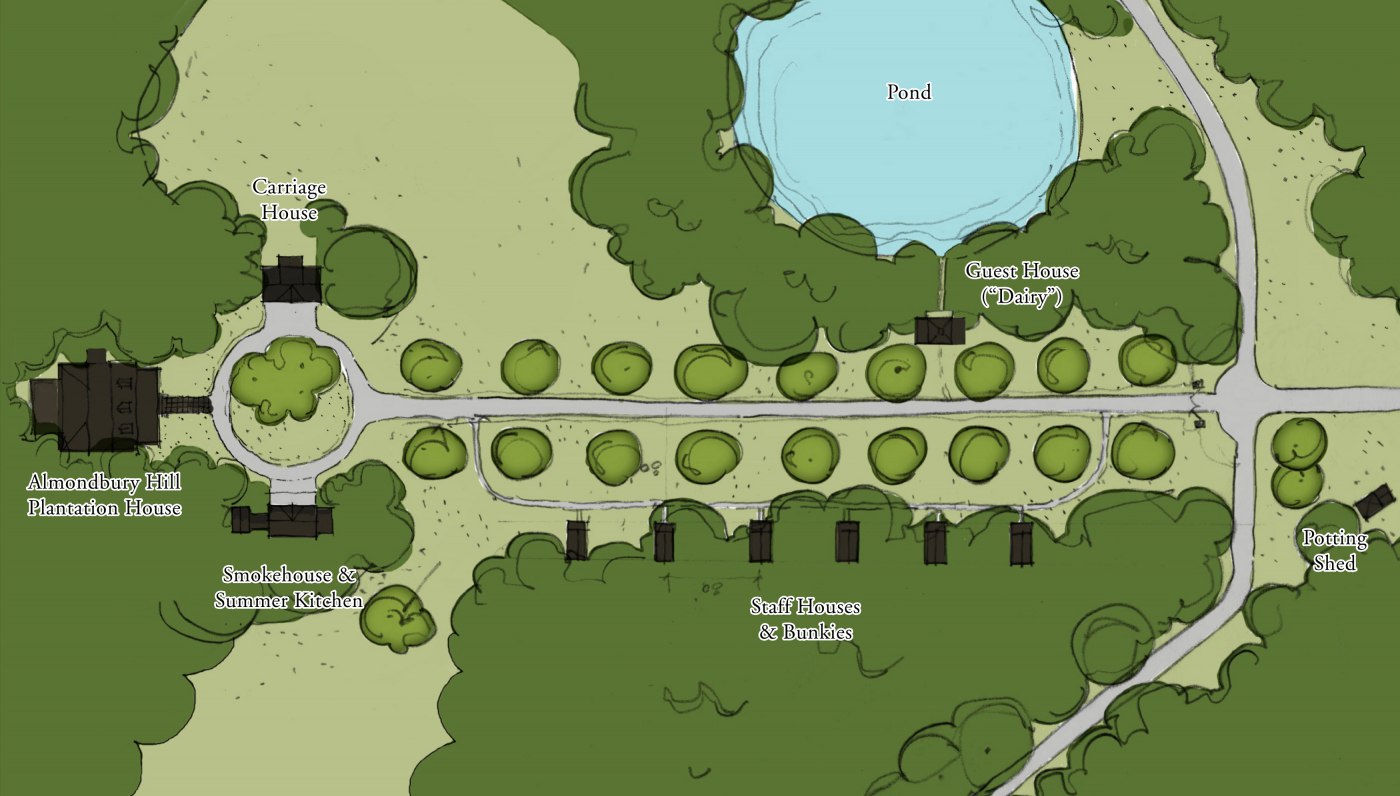 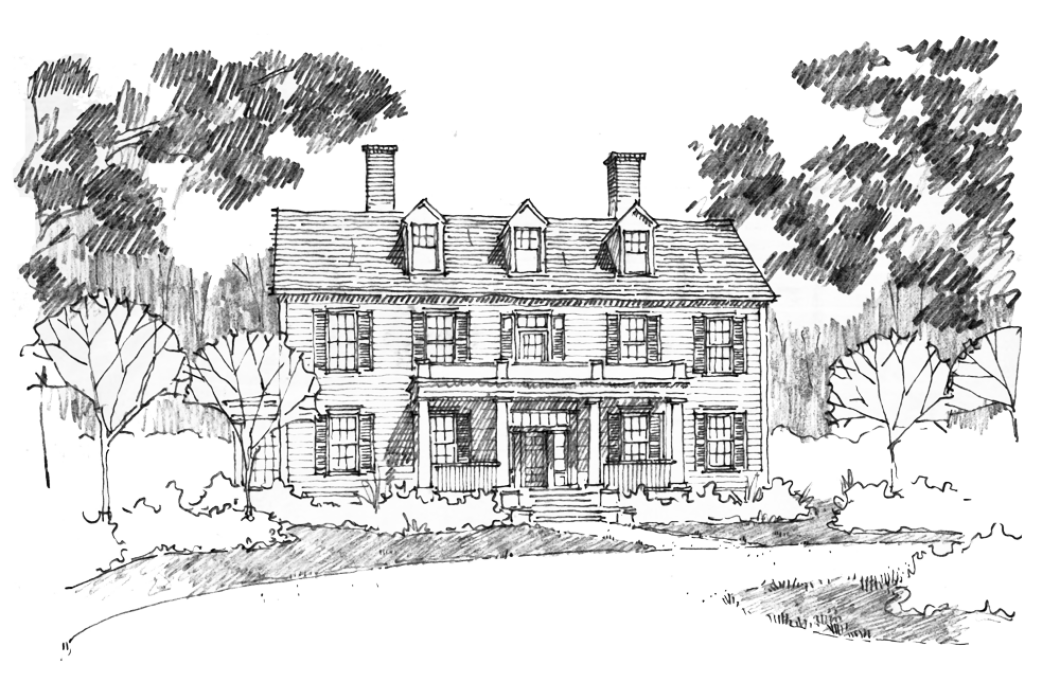 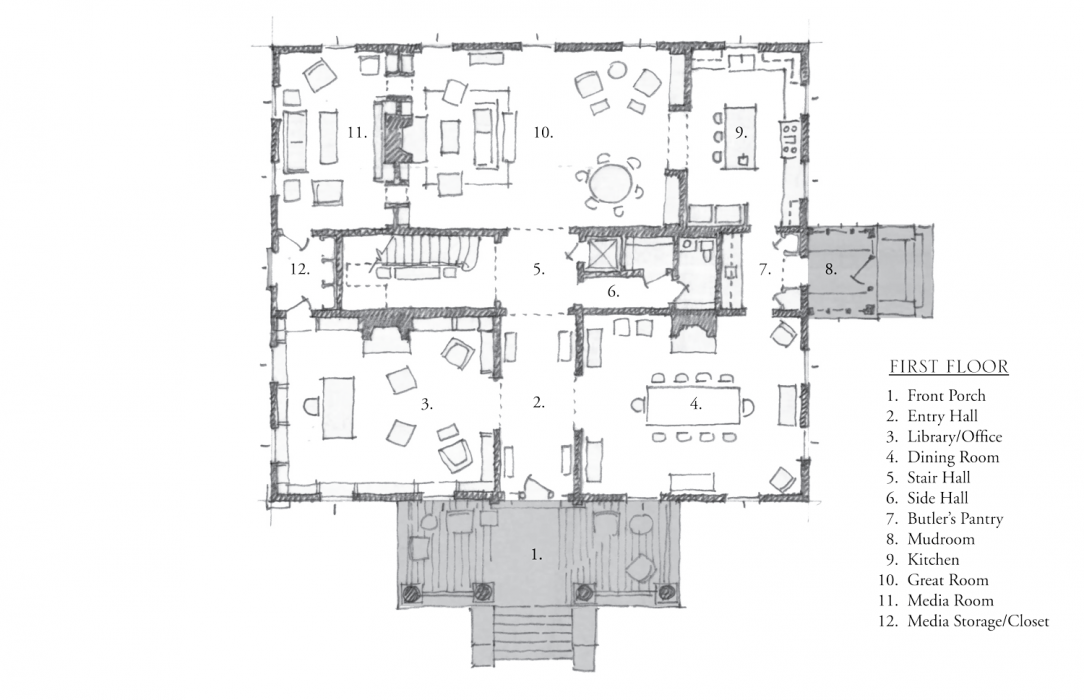 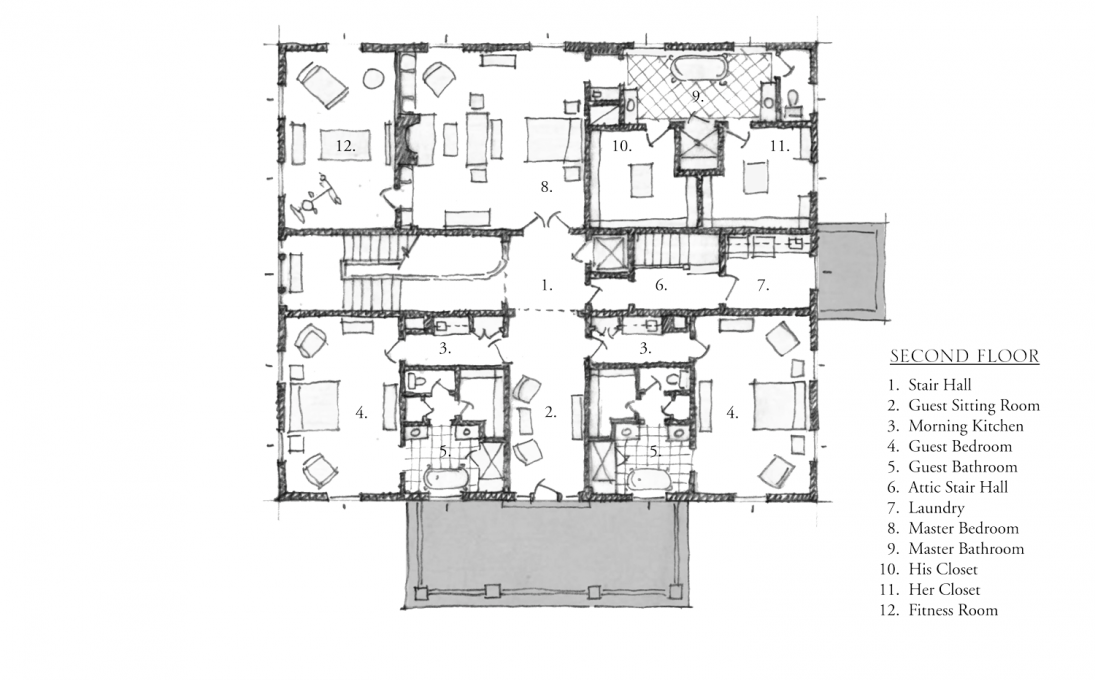 THE SUMMER KITCHEN / SMOKEHOUSE and THE CARRIAGE HOUSE 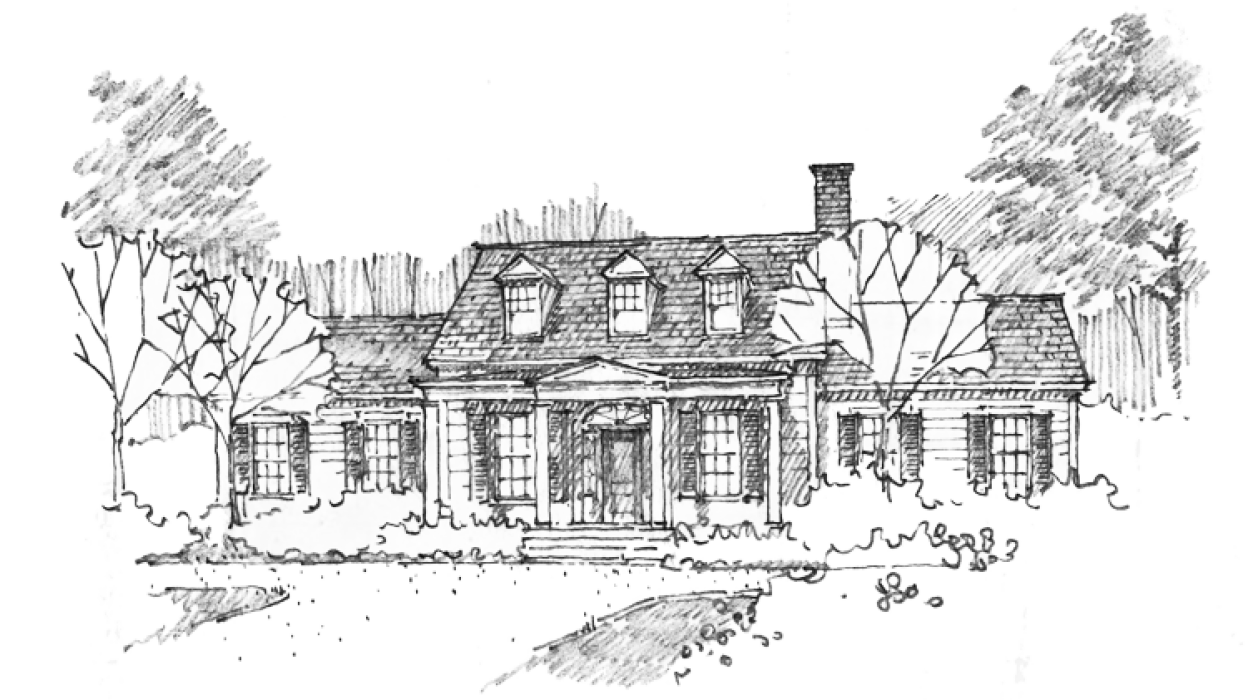 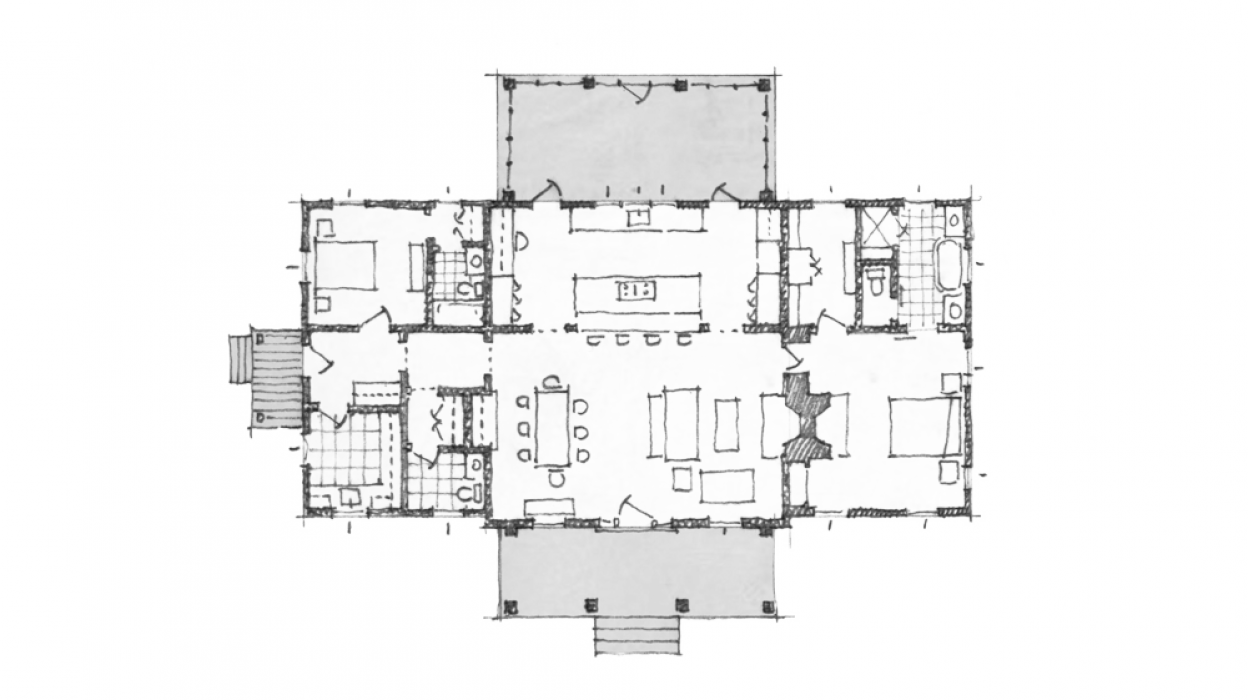 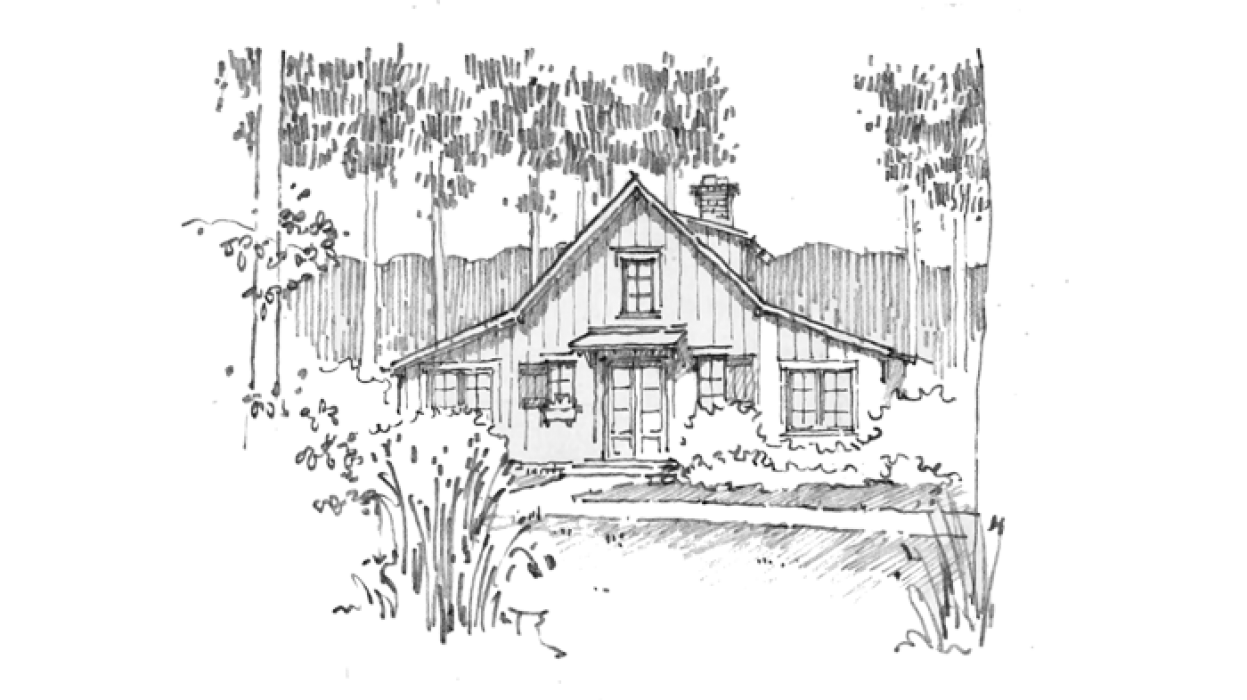 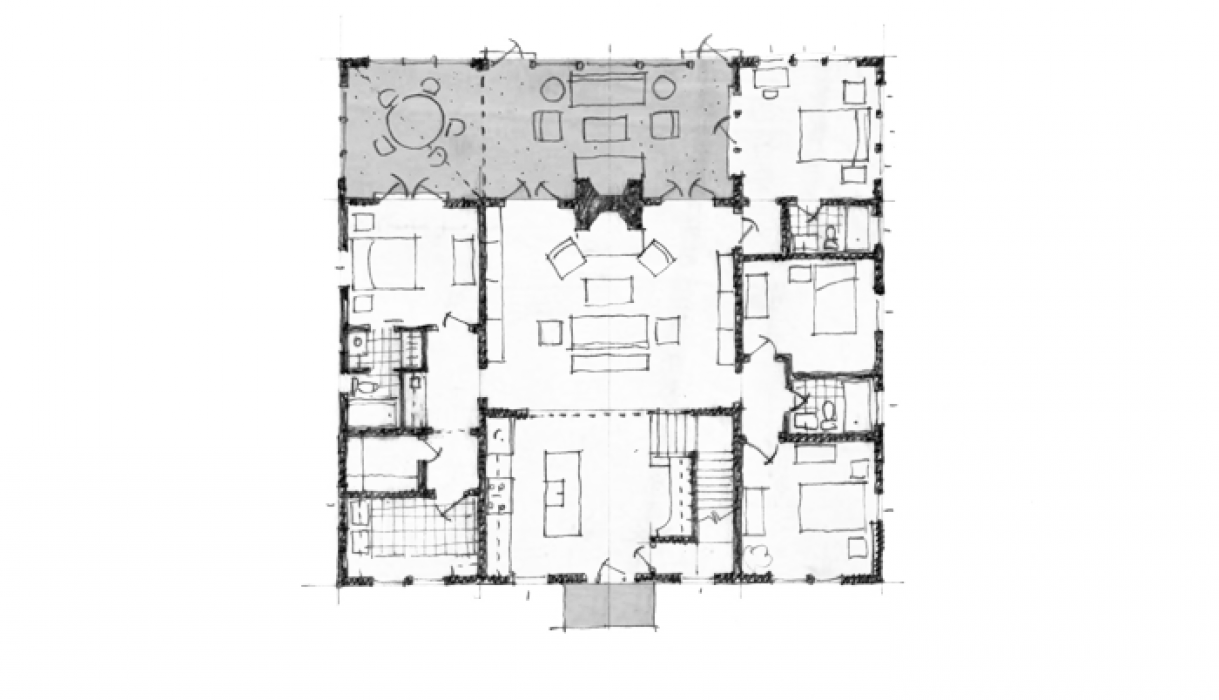 The Huntsman's Cabin
next 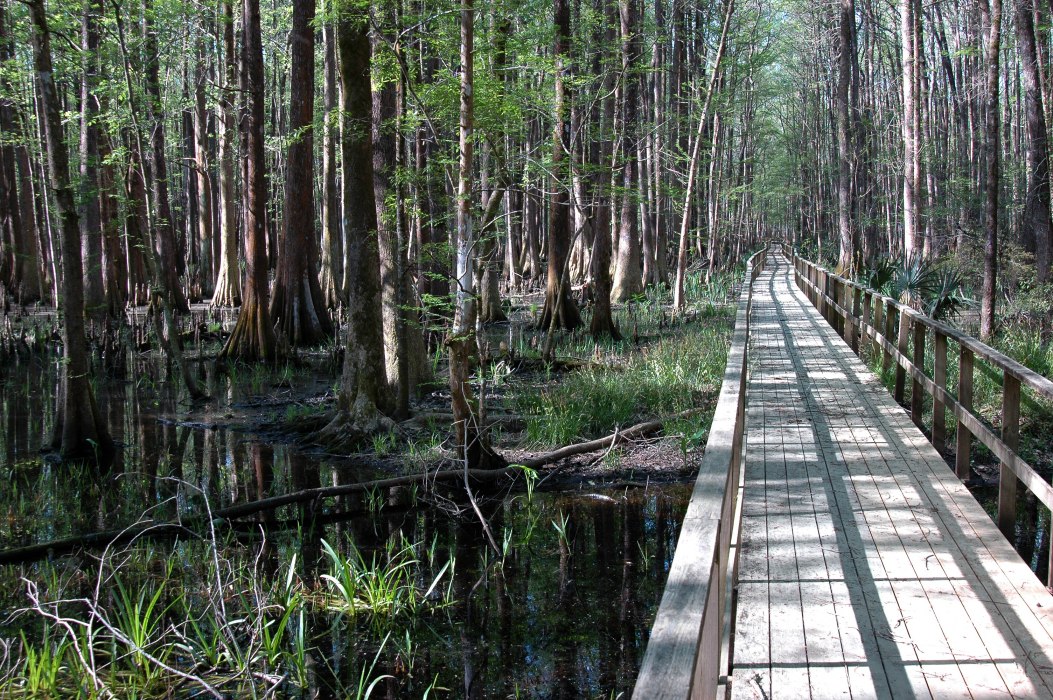 THE VISION FOR CALFPEN PLANTATION sought to embrace the multiple experiences of the expansive flooded rice paddy, the neighboring old-growth cypress swamp, and the deep pine stand encasing the majority of the property. This latter natural element lent authenticity to the narrative of a post-civil war farmstead focused around silviculture and cattle. The rice paddy and cypress swamp also created the ideal setting for modern sporting activities with premium duck, turkey, and deer habitats. 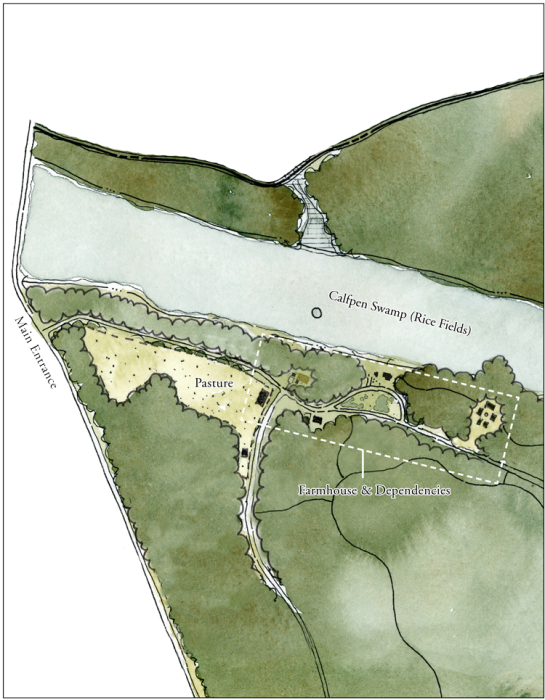 THE CALFPEN MASTER PLAN focused most of the program around a “1900s” farmhouse and the ancillary buildings that would have supported it. In addition to the old farmstead, there is a separate hunting retreat modeled on the humble but refined 1920s and 1930s hunt camps of Northern industrialists. As with all great hunt camps, this one has a colorful name and is playfully referred to as “The Swamphouse”. 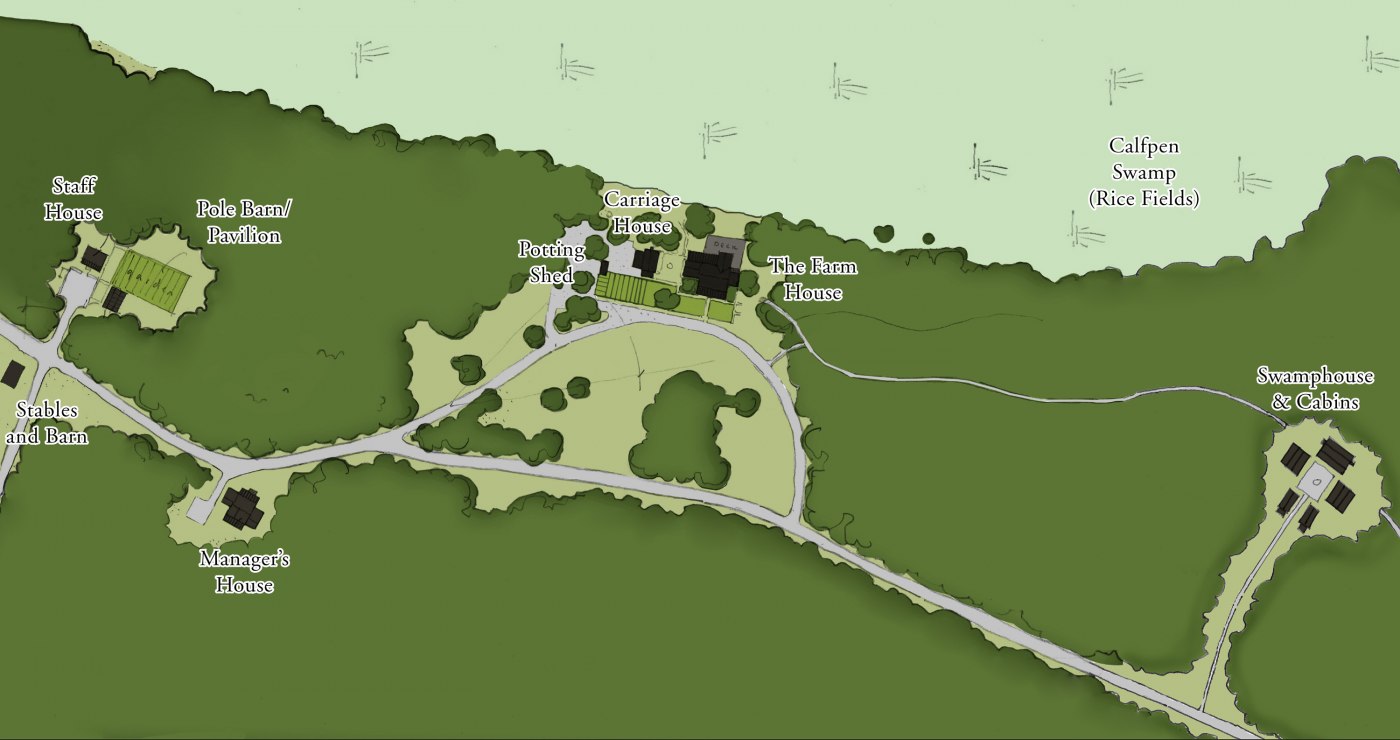 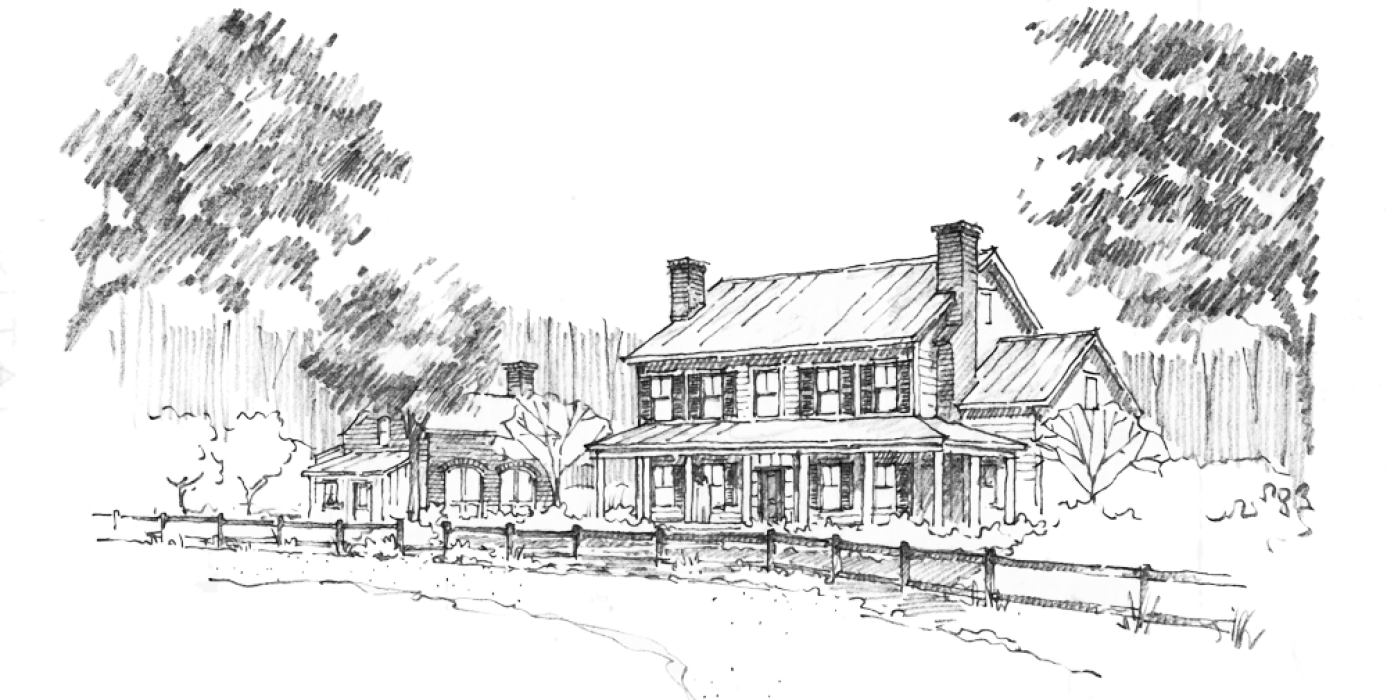 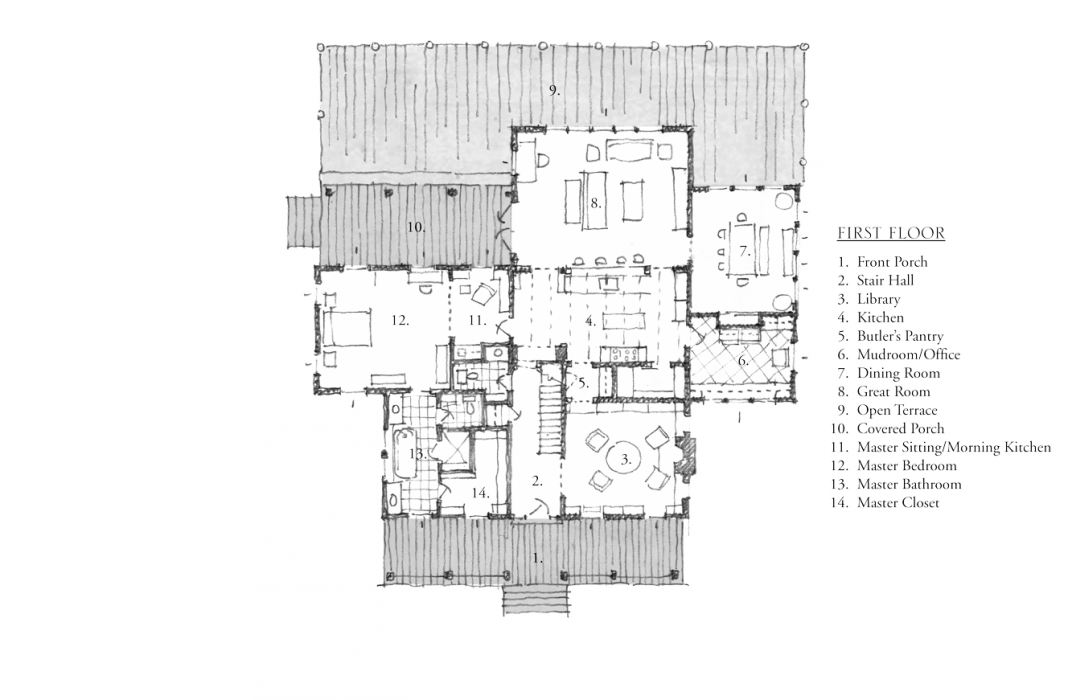 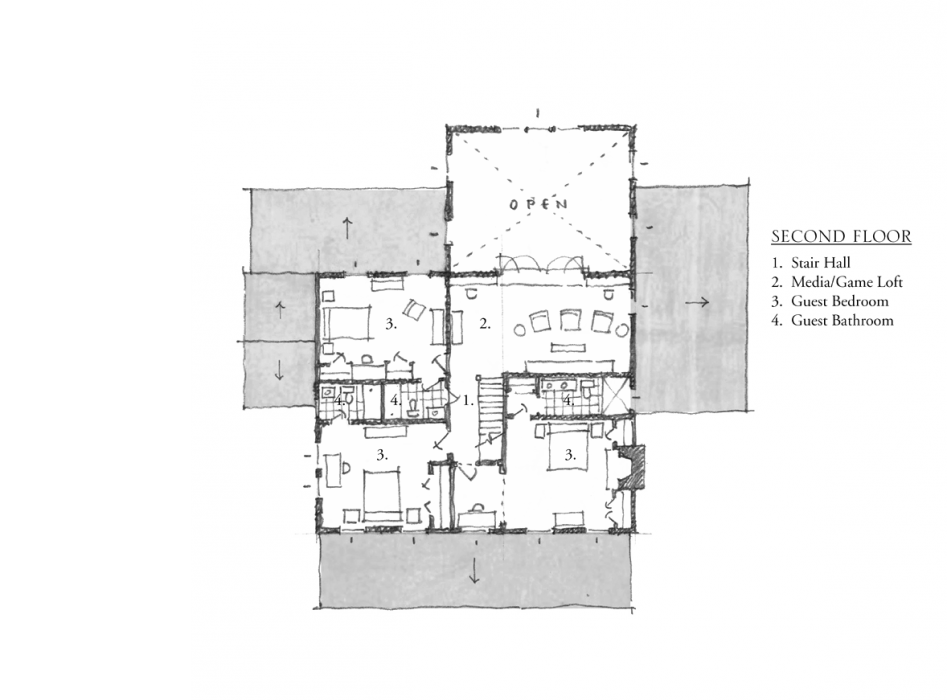 CALFPEN PLANTATION FARMHOUSE
DRAWING UPON HISTORIC PRECEDENT from turn-of-the-last-century farmsteads, Historical Concepts created conceptual architecture that would root the buildings in their natural setting and service the needs of a modern day sporting retreat. The client wanted an estate with the versatility to host a single family, multiple families, or a corporate group, all with the same level of relaxed comfort and hospitality. The farmhouse, with its rambling additions and generational massing, serves perfectly as the core for this kind of activity. The dependencies allow the property to scale up or down as needed, while still providing each guest with a unique and authentic experience.

THE MANAGER’S HOUSE and THE STAFF HOUSE 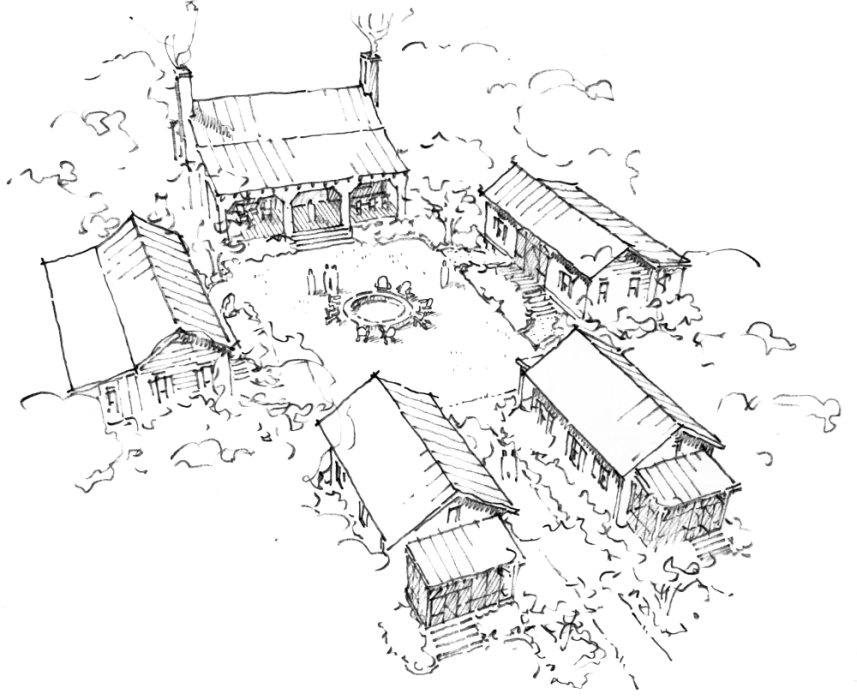 THE HUNT CAMP consists of “The Swamphouse” (a central lodge with mess hall, hearth room, and gun safe) and a series of flanking single room and two room “Bunkies”. In this rustic enclave, visitors can enjoy camaraderie and communal meals, tell tall tales as they gather around the fire pit, and retire to individual cabins in preparation for another big day. 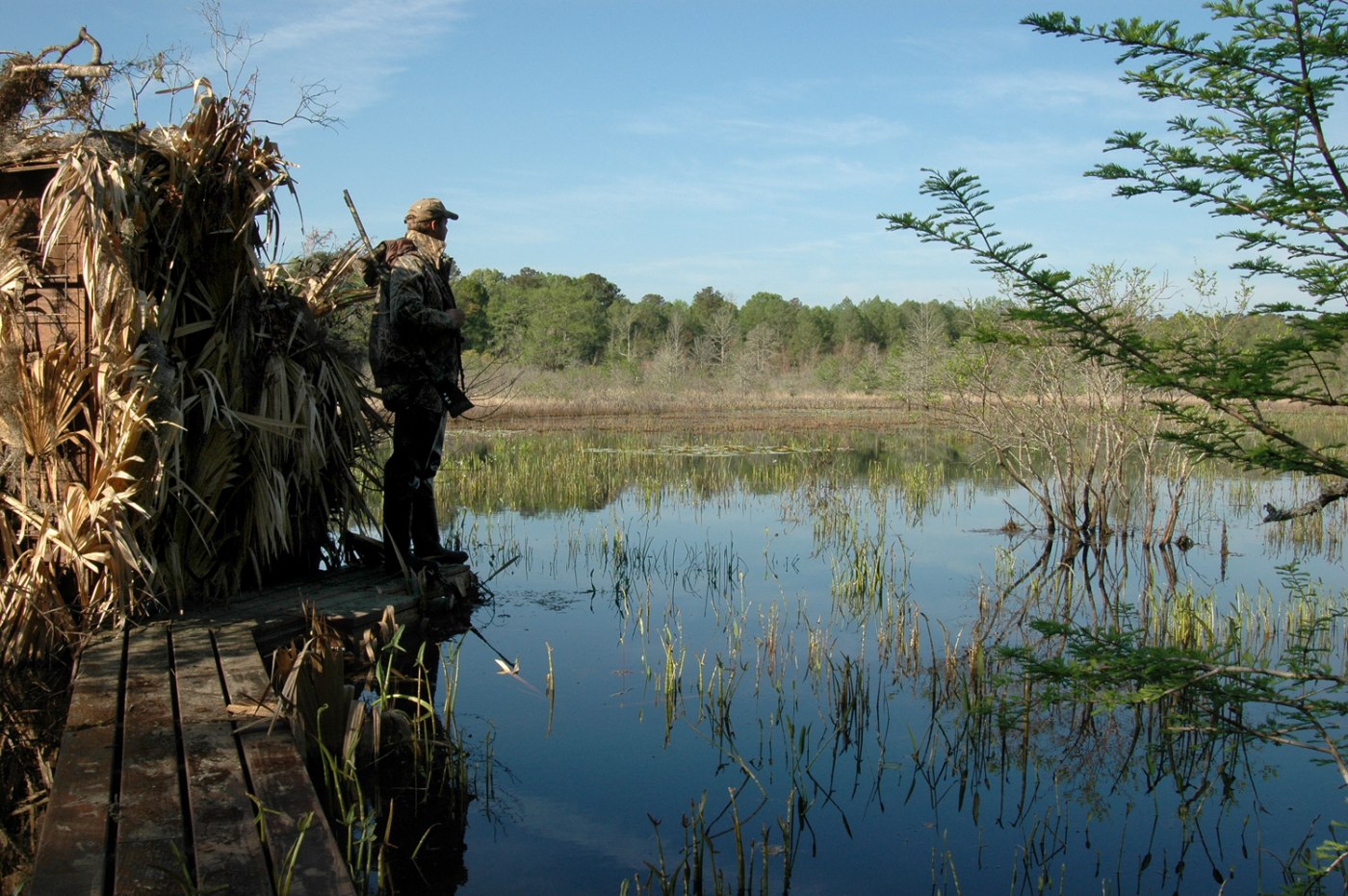